The Wave of Trump-Inspired Fake Violence 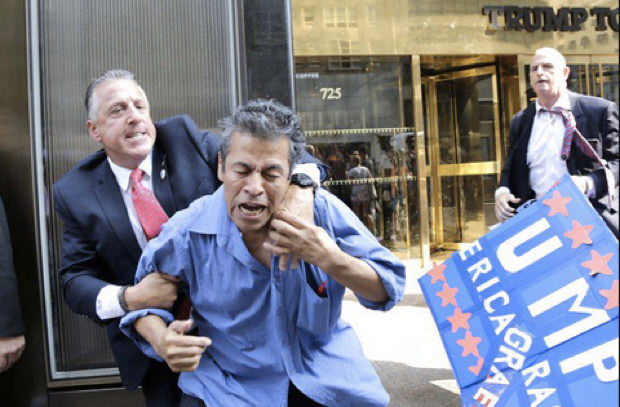 Since Mr. Trump won the election, liberals have been distraught about the wave of Trump-inspired violence that has swept the country. The Southern Poverty Law Center even published a report, Ten Days After: Harassment and Intimidation in the Aftermath of the Election, cataloging hundreds of such incidents. This report has been covered extensively by the media.

So I read the report. They say that in the ten days following the election there were 867 “hate incidents”. Some observations:

They say their information comes from media reports and submissions on their “#reporthate” web page. They admit “it was not possible to confirm the veracity of all reports”. They don’t say what efforts they made, if any, to confirm any of them. So there’s no way of knowing how many of these reports are accurate, how many are hoaxes, and how many are exagerrated. They admit that “many” of the incidents were not reported by the victim or a witness but by “friends”, i.e. many of the reports are pure hearsay. Given human nature, I suspect some of the reports are one-sided, and we would get a very different impression if we heard the other person’s story. (Like, “He called me by an insulting racial slur … Well yeah, after my buddies and I jumped him because he don’t want no white boys in our neighborhood. What of it?”)

In several cases they mention that the racial slur came in the middle of an argument about an unrelated subject, like a traffic incident or a complaint about service in a store. So two people are getting angry and yelling at each other, and at some point one of them uses a race-based insult rather than a generic insult. I suppose that shows that they have racist thoughts in their head. But is the real issue that they hate this person because of his race? Or because they are mad about the traffic incident or the bad service?

If a conservative group published a report on violent acts by immigrants or Muslims or liberal activists, based entirely on unconfirmed, one-sided reports to a right-wing website, how much credence do you think the media would give that?

The Wave of Violence

That said, they report that there were 280 cases of anti-immigrant hate, 187 anti-black, 100 anti-semitic, 95 anti-LGBT, 49 anti-Muslim, 40 anti-woman, 23 anti-Trump, and the rest in a couple of vague general categories. Note the anti-Trump category: they confess there were a number of cases of hate perpetrated, not by Trump supporters, but at Trump supporters. SPLC is honest enough to admit that this category is probably under-represented, as people were unlikely to report anti-Trump incidents on a web page by a liberal organization intended to collect information about pro-Trump hate. I respect their honesty for including the incidents that were reported to them. But I have to question their glibly including 23 anti-Trump incidents in their 867 cases of Trump-inspired hate incidents.

They don’t give much detail on any of the alleged incidents. They list 87 incidents with descriptions of a sentence or two. For the other 780 they give no information at all except counts in broad categories. I think it’s fair to suppose that the 87 they describe are the most extreme incidents. If someone is going to publish a report about hate incidents by a group they don’t like, I don’t think they’d dwell on a case where someone made a mild, ambiguous insult and then not mention a brutal murder. So the 87 listed are almost surely the 87 worst, most extreme and offensive cases.

Just how dangerous was this wave of Trump-inspired hate? Even assuming that all the reports are 100% accurate, of the 87 where they give any information: 50 were verbal insults or insulting notes. 4 were symbols: swastikas or nooses. 2 were signs with insulting messages. 5 were flyers that SPLC found offensive. 17 involved vandalism, mostly graffiti. And one of those was anti-Trump. Only 7 involved actual violence. And of those 7, 3 were violence against Trump supporters! So the “wave of Trump-inspired violence” comes down to … 16 cases of vandalism and 4 physical assaults. Of the 4 assaults, one was someone beating up a homosexual man, one was a man punching a woman in the face, and the other two were men grabbing Muslim girls’ hijabs, in one case knocking her down. While I certainly don’t condone pushing girls around, there is no indication that there was any actual injury. They don’t say how badly hurt the man who was beaten up or the woman who was punched were, but this leaves, at most, two acts resulting in physical injury. In a country of 300 million people. Two people hurt is certainly a terrible thing and the people responsible should be arrested. But two people hurt and two girls pushed around is not a “wave of violence”.

Let me repeat, of the 7 acts of violence reported to the Southern Poverty Law Center, in 3, almost half, Trump supporters were the victims. Given that, by SPLC’s own admission, their method of data gathering was geared to collecting pro-Trump incidents and not anti-Trump incidents, it sounds likely that if we had more data we’d find more anti-Trump violence than pro-Trump violence.

Of course I’m not saying that verbal insults and harassment are okay. Some were extremely offensive. Let me make clear right now that I condemn racial slurs. Maybe some of these were serious enough to qualify as threats, giving the target real cause for concern for their safety.

But of the 87 detailed, many were trivial. Like, an Asian woman reported that a stranger at a train station said to her, “Go home”. As the story was given, it’s not even clear that he meant, “to Asia”. Maybe he just meant, the station is closing and you have to go home now! In another case, a Jewish woman said that a man shouted to her, “nice nose!” I’m left wondering if this was really even an anti-semitic slur, and not a really lame attempt at a compliment. Maybe the guy has a nose fetish. One of the “anti-woman” incidents was the punch in the face mentioned above; another was a rape threat. The rest were catcalls — some crude. But are catcalls really “hate”? Sounds more like lust to me.

Several of the incidents sound a lot more like peaceful political demonstration than hate incidents to me. For example, a group of high school students in the lunch room started chanting “build a wall”. Maybe you don’t agree with that political goal, but isn’t that simply free political speech? If a group of students in a lunch room had started chanting “black lives matter” — surely a slogan as racially tinged as “build a wall” — would the Southern Poverty Law Center label that a “hate incident”?

One of the “hate incidents” was a flyer reading, “Are you sick of anti-white propaganda? You are not alone.” Suppose that instead it had said, “Are you sick of anti-black propaganda?” Would the SPLC call that a “hate incident”? Another flyer said, “Love who you are. White people have the right to exist as white people.” Again, change “white” to “black” and SPLC would be praising that as a call for tolerance.

They show a map with the number of hate incidents in each state. Curiously, although they say the total is 867, when I add up the numbers for each state it only comes to 856. Of those, 380 were in states that voted for Trump and 476 in states that voted for Clinton. The two states with the most incidents were those infamous hotbeds of rightwing extremism, California (99) and New York (69). Wyoming and the Dakotas had zero. Mississippi had 2. The most reports come from places with a lot of liberals. Hmm.

I suppose if someone reports this article to the SPLC, they’ll count it as another hate incident.