France Has Been Almost Totally Conquered by Islamists! 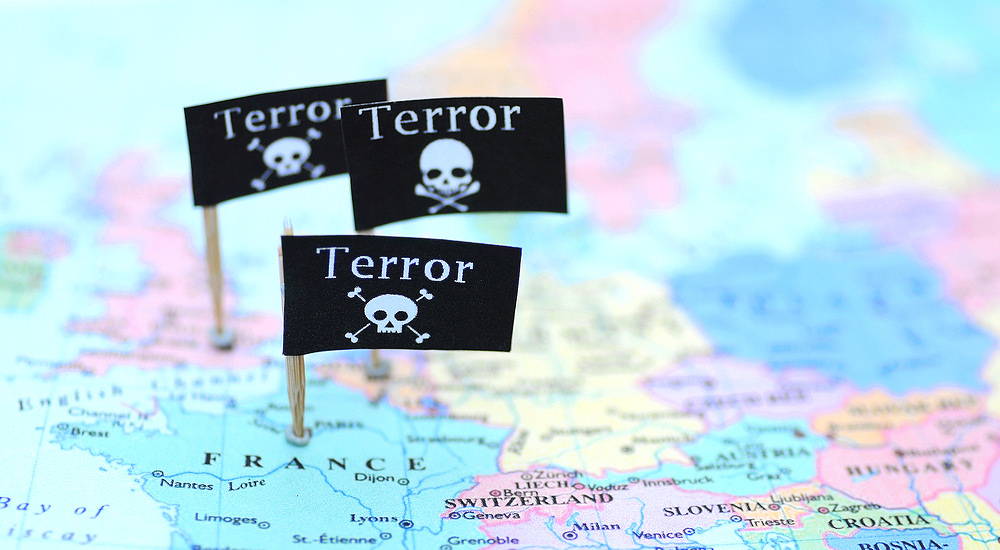 France is in turmoil. For many years, France built its entire foreign policy on aligning itself with Obama’s 57 States: the Organization of Islamic Cooperation (OIC) comprising 56 Islamic countries plus the Palestinians. France did not perceive it at the time, but it placed itself in a trap, and the trap is now closing. “Migrants” arriving from Africa and the Middle East sow disorder and insecurity in many cities.

France’s Muslims are steadily conquering French Land: Today, France has six million Muslims, 10% of its population, and their percentage is growing. French Muslims consider themselves Muslim first. Marseilles, France, already has 73 mosques! There are over 527 “No Go Zones,” essentially Muslim territory, inside France. In these “No Go Zones” only Muslims can go; Shari’ah law prevails; Muslim gangs deal drugs, steal, commit other crimes, burn cars, drink, harass and even rape women who are not dressed in burkhas. And if anyone who lives there complains, he faces horrible repercussions.* The local police dare not go in.* And the local French laws and customs are totally ignored.

Muslims are gaining power in the US, in England and in Europe. In the US; the Democrats plan to put Muslim Brotherhood associate, Keith Ellison, in charge of the DNC. London now has a Muslim Mayor. Germany’s President, Joachim Gauck, asserts that Germany will have a Muslim President soon. In France, Presidential candidate Alain Juppé, mayor of Bordeaux, campaigns in the company of Tareq Oubrou, imam of the city. Tareq Oubrou was a member of the Muslim Brotherhood, but now he says he isn’t.

Churches are being forcibly shut down. In his new book, “Will the Church Bells Ring Tomorrow?” Philippe de Villiers notes the disappearance of churches in France, and their replacement by mosques. As shown in the photo above, on August 3, 2016, in order to demolish it and build a parking lot and apartments, (most likely, for Muslims);French riot police busted the doors of the church of St Rita in Paris while the priest was saying mass. Then, they dragged the priest and his congregation from the church!! * They would never do this to an Imam inside a Mosque. With Christian priests and congregants receiving this kind of treatment from their own countrymen; there is no need for Islamic Terrorists to slit the throat of French Priests!!

Anti-Semitism is also rampant. The French are 100% behind the Palestinians, no matter they stab Jews or burn down Jewish land. The chief Rabbi of Marseilles, Zvi Ammar, even recommended that Jews not wear the kippah any more, because this made them a target. The assassinations of Charlie Hebdo’s Jewish staff, the murder of a Jewish Rabbi and the slitting of the throat of his 12 year old daughter; even the Bataclan massacre while a Jewish rock group was playing; and the many anti-semitic attacks; have lefts Jews in terror. Jews are leaving France in record numbers.

With every terrorist act, Muslims cleverly advance themselves, assisted by Liberal authorities and their Media: After Islamic Terrorists kill innocent civilians; there is no revulsion or desire to restrict their entry. In fact, contrary to the usual Liberal trope, there is absolutely no backlash against Muslims. Over here, when the Ohio State Terrorist drove his vehicle into people and then stabbed those who came to help him; Obama ordered us not to speak against Muslims. He said nothing about the victims and did not praise the quick acting policeman who shot the terrorist dead and save many innocent lives. In France, Islamic Terrorists murdered 89 people at the Bataclan and a total of 130 last year. The authorities hid the fact that the terrorists had brutalized the victims before killing them. They had raped women, cut off the penis and testicles of the men and stuffed them in their mouths; and tortured them to such an extent that many bodies were beyond recognition.*

Here is proof of the power of Muslims: One year later, when the memorial concert was held; Bataclan authorities refused to allow entry to members of the US band, Eagles of Death Metal, that were on stage when the attack started. The reason? A few weeks after the attack, Jesse Hughes, lead singer of the group, had dared to criticize the Muslims involved. The Bataclan’s director said about Hughes, “There are things you cannot forgive.” … You read that right. It was not the torture and massacre of 130 innocent young civilians that the director objected to. He could not forgive the criticism of the Terrorists who committed the atrocities!!!

And the memorial concert for the 130 French people killed by Islamic Terrorists actually ended with the song, “if Allah wills” – “Insh’ Allah” !!!

Do you still think France has not been conquered by Islamists?

French Riot Police Smash Down Church Doors, Throw Priest To Ground During Mass
http://www.breitbart.com/…/shocking-pictures-riot-police-e…/
* excerpted from Guy de Millier’s article at Gatestone Institute.
https://www.gatestoneinstitute.org/9363/france-collapse
Over 527 no go zones in France.
https://www.gatestoneinstitute.org/5128/france-no-go-zones
Breitbart reports on No Go Zones in Europe.
http://www.breitbart.com/…/inside-frances-sharia-no-go-zones
What happens in no go zones
http://www.breitbart.com/…/inside-frances-sharia-no-go-zon…/
The local police dare not go
http://louderwithcrowder.com/french-police-enter-muslim-no…/
http://newobserveronline.com/police-admit-no-go-zones-franc
French government ‘suppressed gruesome torture’ of Bataclan victims as official inquiry is told some were castrated and had their eyes gouged out by the ISIS killer
http://www.dailymail.co.uk/…/French-government-suppressed-g…