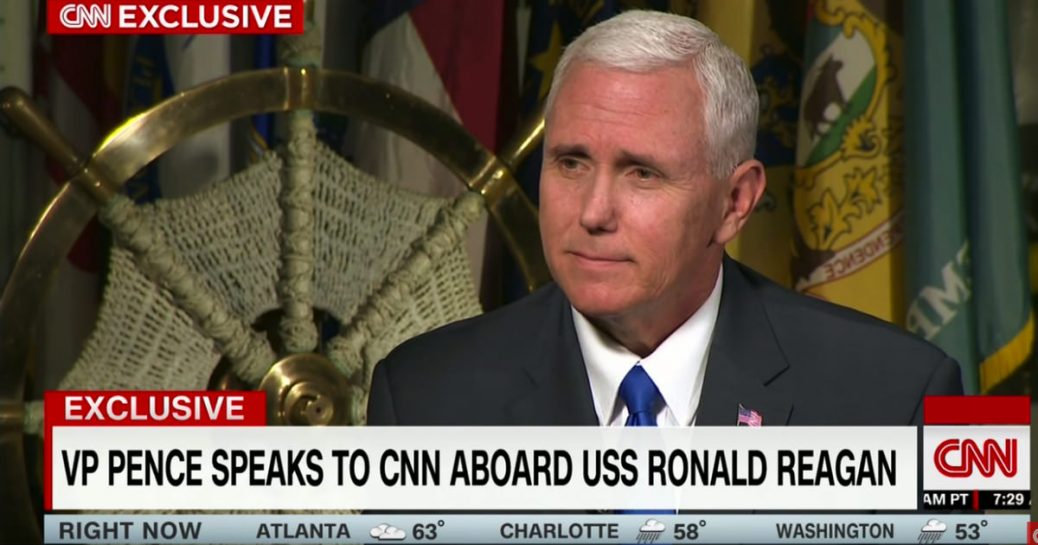 Vice President Mike Pence sat down with CNN’s Dana Bash to discuss President Trump’s commitment to early administration promises, and he told the reporter that President Trump was a “man of his word.” Specifically Bash was asking about the concern among some Trump supporters that Trump had forgotten his promise that America would no longer be the world’s “policeman.”

Dana Bash: A lot of the voters supported the president because they liked that he was explicit that the U.S. was going to stop being the world policeman. But now it hasn’t even been 100 days, and we have seen military action in Syria and Afghanistan. You’re talking pretty tough via-a-vis North Korea, holding up the possibility of air strikes with or without China’s help. What do you say to voters at home who say this is not what they signed up for?

Mike Pence: I say to voters that President Trump is a man of his word, and he’s the kind of strong leader who is going to pursue the vital national interests of the U.S. And he has demonstrated an ability and willingness to use force where necessary. The President’s decision to launch cruise missiles into Syria, to the very airbase that launched that horrific chemical attack against men, women, and little children was the right decision and the American people know it. It’s been heralded across the world community. There are some that would like to see a greater American involvement in the Syrian conflict but the President has made it clear, we had a response to that horrific attack that was measured, that was focused. And the President is going to continue to be focused in Syria where he would during the campaign and that is on hunting down and destroying ISIS.