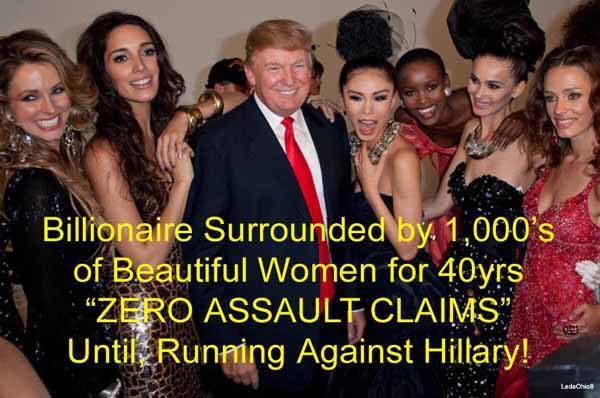 Liberals are terrified that Trump will reverse Obamaism and the progress the Left has made in destroying America and remaking it into their socialist hell.

In the last days before the election the Left is going nuclear to smear Trump in the eyes of voters and cover up the lies and corruption of Hillary and the Democrats.  Hillary is being kept out of the eyes of the public because when they see and hear her they don’t like her.  People recognize a liar and only her fanatics believe her lies.  The leftwing media has perpetuated her smears of Donald Trump who has been relentless in telling the truth about the Clintons.

Donald Trump has been in the public eye for more than forty years, and until now no one has ever called him a racist.  Liberals say Trump is racist because he wants to build a wall to stop foreign invaders from stealing across America’s borders.  They call him a racist for wanting to stop Moslems immigrating into America who want to subvert the Constitution to establish Sharia Law, who are willing to terrorize and murder Americans, and would intimidate people to getting their way.  They call him a racist because he calls for law and order, objects to riots by black hate groups, and does not want to stop police from shooting black criminals.

Again, Trump has been in the public eye for more than forty years, and in all that time, despite being surrounded by thousands of beautiful women and having deep pockets, not one woman has ever made a hint that he acted even remotely inappropriately with them, but was always a perfect gentleman.  In a day, because of a question set-up by a leftwing debate moderator, five women were brought forward to declare that he sexually molested them.  They have been treated by the leftwing media as holy evangelists of truth despite their stories being torn to shreds by the facts.

One accuser said Trump molested her in first class on an airplane, lifting the arm rest between them and putting his hand up her skirt.  The arm rests in first class do not go up as they do in coach, and there is a stewardess and other passengers who would have witnessed a woman protesting being molested.  Another said Trump groped her in a public place while she was interviewing him for a story.  The story she wrote was a beautiful piece about The Donald’s love for his wife and not a hint that he did anything for which she could have blackmailed the billionaire with a sensational story of adultery.

For the Left to condemn Trump’s playboy past when they are the Party of Perversion that celebrates the adulteries of Bill Clinton who is a known sexual predator, and have made adultery all rage in America, their pretense of morality is the pinnacle of self-righteous hypocrisy.  That Michelle Obama condemns white people as disrespectful of women while lauding rappers who refer to her as Obama’s b*tch is a galactic farce.  Women in black culture and Islam are second class citizens, b*tches and ho’s, not wives and sweethearts who are the equal of men as they are in white Christian culture.

Meanwhile, WikiLeaks has outted Hillary’s corruption releasing hacked emails that the Left is condemning as provided by Russia, illegal, immoral, and baseless.  They do everything in their power to mock and distract from the truths revealed about Hillary and Obama in their efforts to bring America to war on the side of the Islamo-Nazis America has been fighting for decades.  Hillary’s two-faced public and private policies exposed her pandering to the people while promising her rich donors to protect them from the dupes who vote for her.

Everything Obama has done has brought America down in decline.  Our workforce is smaller than it was under Carter, our army smaller than it was before WWII, and our Navy smaller than before WWI.  The Liberal media is angry with Trump for daring the speak the truth unabashedly and fearlessly.  While their followers always cheer them when they produce smut and lies about Republicans, when Trump retaliates in kind they cry foul.  Trump’s weapon is truth because liberals can’t handle the truth.  The reason he won over Republicans is because he spoke truth that they dared not because they feared the Democrat media.  And he also proved that he can use Democrats own weapons against them and successfully fight fire with fire.

What we’ve seen in Donald Trump has not been seen in recent conservatism.  Mitt Romney and Ted Cruz are two of the most righteous man I’ve known.  Yet Trump defeated Ted with the simplest of methods – by tarnishing him in the eyes of the people as a liar.  This didn’t prove that Trump is a righteous man, but it did prove that he knows how use the weapons of the opposition.  The reason he could get away with it is the same reason Democrats do so; because the majority of people just aren’t that smart and can be easily deceived and manipulated with simple phrases, chants, and distractions.  Liberals don’t like that and are terrified of Trump’s use of their own weapons against them.

This doesn’t make Trump a bad man because it is not how you use those weapons that makes the difference, but the ends for which you use them.  Politics is a war of words and, just as in actual war both sides use the same weapons, you can use those weapons to enslave others or to protect their liberty.  Defeating Ted didn’t make him right, but it did make him the right man for the job.  Liberalism didn’t become dominant in our culture overnight and conservatism cannot salvage this country in a day.  It took generations to bring America down to this point.  It will take generations to bring it back and every journey begins with the first step.  Those who fight for all or nothing often end with nothing.  The Donald has spent a lifetime understanding how to advance his agenda, and his agenda as president is our agenda for a greater America, not the Democrat agenda to make America the world.

Don’t be discouraged or despair even if the Democrats can pull off a win.  We may lose or we may win, but we will never be here again.  The final judgment of our lives is not decided on this earth, but is in the hands of God.  So don’t take life so seriously because you’re not gonna get out of it alive anyway.  Remember:

“There is no defeat in death.  Victory comes in defending what we know is right while we still live.” – Alfred Pennyworth, Batman & Robin

“They may take our lives, but they’ll never take our freedom” so long as we live in the Son of God.

If Trump succeeds then the Obama/Clinton conspiracy faces exposure that could prove fatal for the betrayers of America, so don’t be surprised that this will be a fight to the death and no weapon will go unused as all is fair in war.

Trump’s platform in total – the hour you need to hear

READ “Social Justice and the Hitler Model” at liberalsbackwardsthihnk.com