There’s a New Sheriff in Town, so Why isn’t Hillary in Jail Yet? 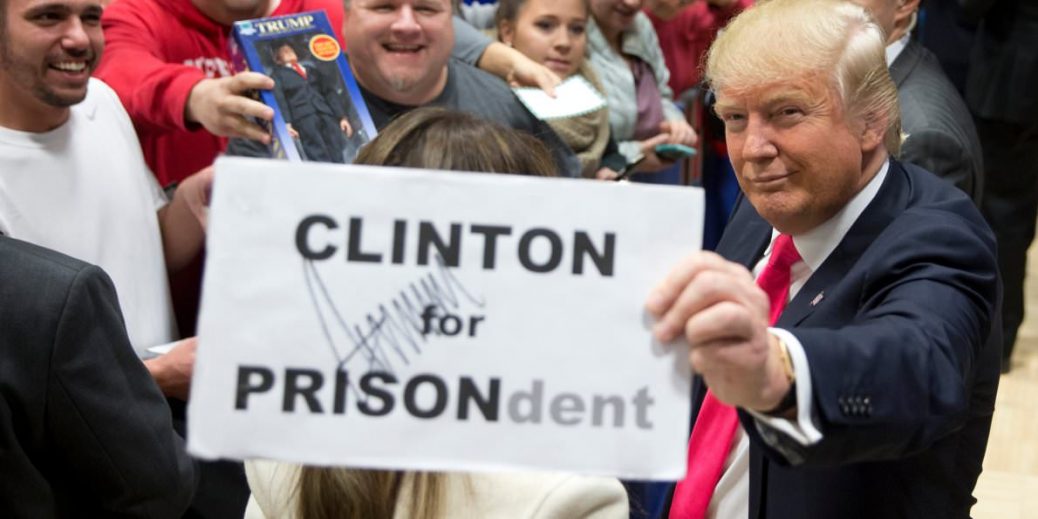 I keep hearing “there’s a new Sheriff in town”…but it seems as though the old ways are still being used.   Did you ever hear the expression “a new broom sweeps clean”?  Attorney General Sessions was supposed to be that new broom, but so far it hasn’t swept away anyone of any consequence.  Now you’re questioning me as to whom it should be, right?   The simplest answer to that question is that the entire former administration and the woman who was the presumptive next President, that’s who.   If you go online you can actually find lists of the laws that Hussein and Hillary have broken, and they are numerous.  The Don made several references to Mrs. Clinton during the campaign, notably one that said that if he were President she would be in jail.   Why isn’t she?

Why are there SO many “suicides” and unsolved murders of people who either know something detrimental to the former President and/or the former Secretary of State?   I think that even Inspector Clouseau could solve one or more of these cases.  It’s interesting that some of them, unless they are brought to the public’s attention by accident of the mainstream media, are never mentioned except on one cable news channel.   As a matter of fact, that unnamed news channel dishes out real news and seems to contradict the fake news outlets at every turn.   Edward R. Murrow, Walter Cronkite, Huntley and Brinkley, and others of that caliber must be spinning in their graves to see how journalism has been degraded.   The body count for former administration high echelon people is staggering but, as noted, nothing seems to be happening in that area.

In a flurry of slogans, The Don was elected and by a majority of people who really want him to do the things he’s promised.  I’m one of those, and my thinking is that, whatever it takes to do the job, that’s what Congress should be prepared to do.  It irks me no end that, for eight years, the Republicans have been talking about repealing and replacing Obamacare…and now, with the power to do something, they are nit-picking and arguing among themselves and nothing gets done.   Here’s a novel idea: why not be able to buy healthcare/healthcare insurance the same way you buy a car.  You know what kind of car and pretty much what options you want, so when you are at the dealer’s they either give you the deal you want or you go somewhere else.  What could be simpler than that?  Being a world-class skeptic it occurs to me that Congress takes a whole lot more time to get something accomplished than is actually necessary.  How about someone telling me why that is?

Former General Mattis, now the Secretary of Defense, wisely allows field commanders to make decisions, because they know what’s going on.  Micro-managing, as was the former administration’s method of governance, does nothing constructive for the troops.  They were fighting under Rules Of Engagement(ROE) that gave the enemy the advantage and some have been tried for murder, after engaging the enemy.   There isn’t any valid reason that comes to my mind where a trooper in the field can ever be tried for murder or manslaughter.  It would have to be such a brazen act as to never be considered self-defense to entertain the idea of a trial.   We(the US Army) have a trooper that DID commit an act of treason, and is still living.  Between his parents and the former President, they’ve put up a defense for him that a second-year law student could probably defeat…especially if he was using the Uniform Code of Military Justice(UCMJ).   The purpose of a war is to defeat the enemy, and so decisively that they will never even think of starting something ever again.

Why are there SO many bean-counters running the armed services?   It’s getting to be a joke with the socio-sexual experiments being perpetrated in there.   What do you think all of this crap does to the morale of the troops?  I hear from a lot of them and they are fed up with it.   Being a male chauvinist my opinion is that women have a place in the armed services but NOT in combat.   Oh sure, now and then there will be a woman that survives an ordeal, but it’s rare and she might have had the rules changed to accommodate her…which has happened in the Rangers.  Physical strength is sometimes called upon to subdue an enemy or maybe to pull a wounded trooper to safety…and I don’t believe that the majority of women can do what’s necessary.  In particular, ISIS would treat an American female trooper in a horrible manner before killing her…and that’s not to say that a male wouldn’t suffer the same fate.  Heading up an armed service should be a person(male) of some experience with that service, and not just a bean-counter, so Mr. Trump, pick wisely.

Parting shot: Why do we continue to tolerate the InFernal Revenue Service(and that’s service like what a bull does to a cow) and their answer-to-no-one attitude?  The government issues subpoenas and people thumb their noses at them.  You don’t want to respond to a subpoena?  Fine…we’ll send a couple of US Marshals to physically bring you in because NO ONE is above the law in this country…no matter what they might think.  No one.  Period.