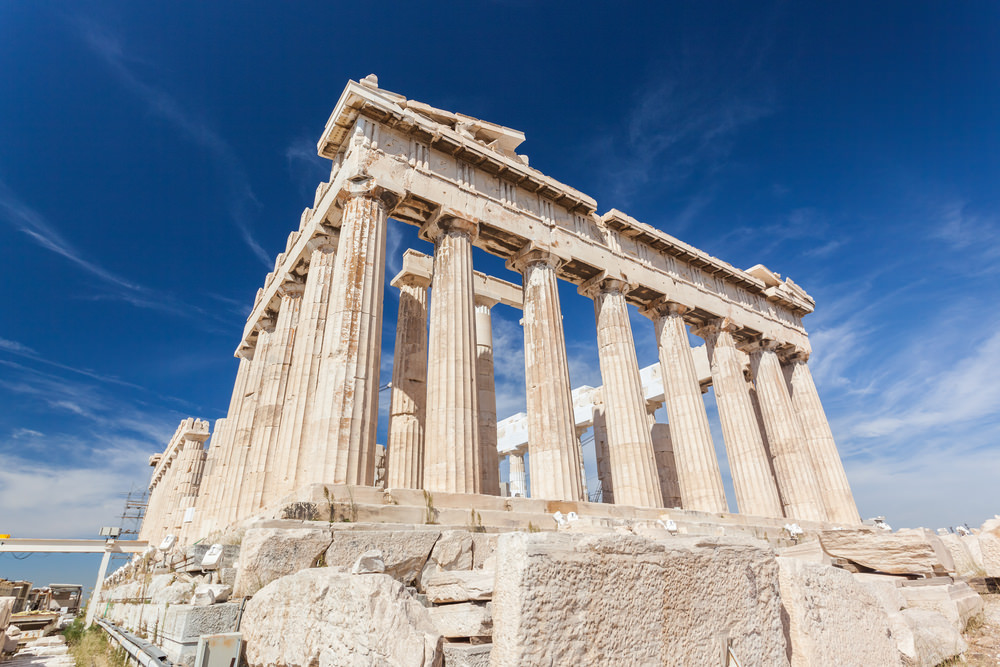 The ancient Athenians were a thinking people, and they taught their boys to be citizens of a free state that had come into being through thought. Basic to all Greek achievement was freedom, an idea that mysteriously appeared in the mountains of the poor little country of Greece, continuously threatened by danger from powerful enemies on all sides. In the great empires of antiquity — Egypt, Babylon, Assyria, Persia — splendid though they were, with untold riches and immense power, freedom was unknown. Such an idea never dawned on any of them. At Marathon the Greeks won a decisive victory over the invading Persians who were thought to be invincible, and some Greek ships defeated a large Persian fleet at Salamis. These victories proved that one free man was superior to many submissively obedient subjects of a tyrant. Demosthenes said Greeks would not think living to be worthwhile if they could not do so as free men.

In Athens great prime Athenians were free. No one told them what they must do or what they should think — no church or political party or powerful private interests or labor unions. Greek schools had no donors of endowments they had to heed, no government financial backing to be made secure by acting as the government wanted. This meant they had to take full responsibility, but that is always the price for full freedom. The Athenians were a strong people, they could pay the price. They were a thinking people — they knew what freedom means. They knew — not that they were free because their country was free, but that their country was free because they were free.

Athenian education aimed at producing men who would be able to maintain a self-governed state because they were themselves self-governed, self-controlled, self-reliant. Plato speaks of “the education in excellence which makes men long to be perfect citizens, knowing both how to rule and how to be ruled”. They willingly obeyed the law, not only the written,  but still more the unwritten — kindness and compassion and unselfishness and the many qualities which cannot be enforced, but without which men cannot live harmoniously together. If ever there is to be a truly good and great and enduring republic, it must be formed along these lines.

In Athens for centuries one genius after another was produced. In one book it said one in every forty was so denoted. We ought to imitate the way the Greeks were educated so our geniuses can emerge. Just what the teaching in the schools was which laid the foundation of the Greek civilization we do not know in detail, but the result we do know. Greek children were taught, Plato said, to “love what is beautiful and hate what is ugly.” When they grew up their very pots and pans and water jugs had to be well designed, skillfully painted and pleasant to look at. It was part of their training to hate clumsiness and awkwardness, they loved grace and practiced it. Pericles said the Athenians loved beauty, but in the Greek way, with simplicity, they did not like the extravagances of luxury. If they had riches, they did not make a show of them, and no one was ashamed of being poor if he was useful.

The Athenians in their dangerous world needed to be a nation of self-reliant individuals, independent men who could take responsibility, not echoes or copies; men who wanted to be let alone to pursue their work and interests without interference, but who were also closely bound together by a great aim, the commonweal, each one so in love with his country — Pericles own words — that he wants most of all to use himself in her service.  Someday those boys would be  citizens of Athens, responsible for her safety and her glory, “each one”, said Pericles, “equipped to meet life’s chances and changes with the utmost versatility and grace.”  To the Athenians education was by its very nature an individual matter, they thought about each boy. To be properly educated, a student  had to be taught music, he learned to play a musical instrument. He had to learn poetry, a great deal of it, and recite it. There were many poets, but for sure Homer was the great textbook. Today music has largely been removed from the curriculum (to make way for Islamic indoctrination I suppose), and who nowadays is interested in Walt Whitman, Emily Dickinson or Robert Frost? Greek education was not geared to mass production. Athenian children were carefully led to recognize and fulfill their potential while our millions learn the same lessons from sea to shining sea (God forbid common core) and spend hours in front of television sets looking at exactly the same programs at exactly the same time. The trend is to ignore  differences, if not trying to obliterate them, and wanting everybody to be alike, like robots. We’re headed towards a standardization of the mind, what Goethe called “the deadly commonplace that fetters us all.”

We have a great civilization to save — or to lose. The greatest civilization before ours was the Greek. They challenge us, and we must meet the challenge. Our world today is dangerous. They too, lived in a dangerous world. They were a little, highly civilized people, the only civilized people in the West, surrounded by barbarous tribes and with the greatest Asiatic power, Persia, always threatening them. In the end they succumbed, but the reason they did was not that the enemies outside were so strong, but that their own strength, their spiritual strength, had given way. While they had it, they kept Greece unconquered and they left behind a record in art and thought which in all the centuries of human effort since has not been surpassed.  In the end, more than they wanted freedom, they wanted security, a comfortable life, and they lost all — security and comfort and freedom.

The point is not that their taste was superior to ours, not that the Parthenon was their idea of church architecture nor that Sophocles was the drawing card in the theater, nor any of the familiar comparisons between fifth century Athens and 20th century America, but that Socrates found on every street corner and every sports arena people who were caught up by his questions into the world of thought. To be able to be caught up into the world of thought — that is to be educated. In our schools the fact that it is so much more satisfying and interesting and delightful to be an educated person than not does not seem to be important and is not emphasized.

Athens rose because there was in the Greeks the greatest spirit that  can dwell in the human breast, the spirit that sets men free. Plato put into words what this spirit is: “Freedom is no matter of laws and constitutions; only he is free who realizes the divine order within himself, the true standard by which a man can steer and measure himself.” True standards, ideals that lift life up, marked the way of the Greeks. Therefore their light has never been extinguished.