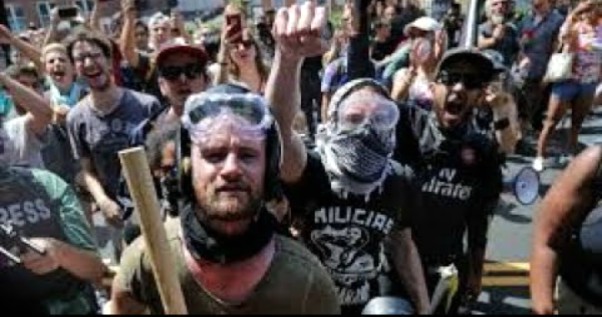 The carnage in Charlottesville last week was an event organized wholly and completely by Barack Hussein Obama’s Army.  Whenever you dig down you always find that the Left is operating from the sewer.

The leader of the neo-Nazi/KKK protest march in Charlottesville, VA, last week that saw massive riots turns out to be an Occupy Wall Street organizer, i.e. one of Obama’s people.  This is Obama’s Army putting on a show for the ignorant to dupe them into believing that the entire Republican Party is white racists and the entire Democrat Party are purists fighting racism.  What it was in reality was the dispossessed militant arms of the Democrat Party that they have kicked aside to embrace their new favorite haters of Black Lives Matter and Antifa.  When the fighting started all good Republicans and all Democrat dupes who were dumbfounded by the turn of events stepped aside and let the KKK and BLM slug it out as Antifa went after the neo-Nazis.  Racists fighting racists, and fascists fighting fascists, and the fake news media saying it’s all Trump and the Republican’s fault!

That’s how it’s done, folks.  That’s how propaganda is manufactured and disseminated to an unsuspecting public to dupe them into believing lies.  It is right out of the Hitler playbook composed by the Democrat Party.  Send your own people in to start fights with your own people and then blame the peaceful people for the bloodshed.  The Left knows how to play the victim and then beat you in the head with your sympathy.  It’s disgusting and proof of how the Left is NEVER right!  For the past few years America has been treated to the fascist leftist’s riots, looting, burning, assassinating police, and assaulting anyone who speaks out against them.  Now they have created a narrative by which they believe they can beat Republicans in the head and label them racists.  Except that for righteous intelligent people that poop don’t fly.  It’s just going to lay there like the turd it is and stink up the place.  Let the liberals pick it up and try to make it a halo around their heads.  Meanwhile, Barack Hussein Obama sits quietly in his house in Washington, D.C. orchestrating plots for how the Resistance Movement can keep Trump from restoring America to greatness.  What will it take for Trump and Sessions to put the FBI to surveilling his insurgency as he illegally did to them during the campaign?