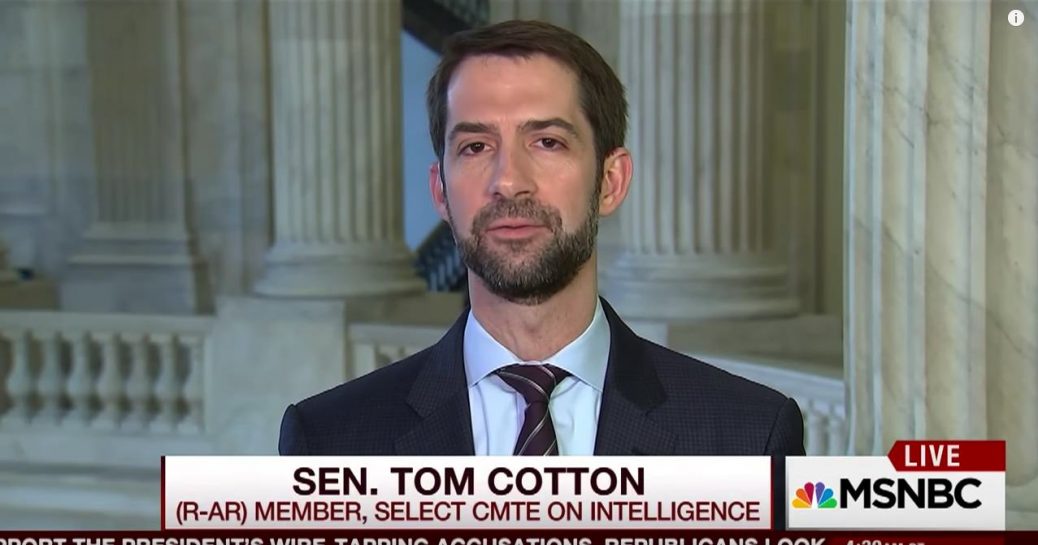 Senator Tom Cotton (R-AR) appeared on MSNBC’s Morning Joe yesterday and the one thing they wanted to talk about was Donald Trump’s “wiretapping” accusations.

Joe Scarborough kept trying to pin the Senator down on whether or not President Trump was telling the truth about being “wiretapped” by President Obama. For his part, Cotton did not bite on Scarborough’s pointed questions but he did say that he’d not yet seen any evidence that Trump Tower had been wiretapped using a FISA warrant. However, the junior Senator also said that there are thousands such documents and the evidence may well exist.

Senator Cotton also noted that the denials from the Obama administration officials were too cute by half, as you could tell by the precise language that the administration was trying not to give away too much with their non-denial denials.

SCARBOROUGH: Everybody in the intel community has said that is not the truth. You are, obviously, on the intel committee. I’ll ask you what everybody was asked yesterday. Have you seen any evidence whatsoever that Barack Obama ordered any wiretapping on Trump Tower?

COTTON: I have seen no evidence of that, Joe. But I would also say, a lot of the anonymous sources in the media are stating things that — that are very precise and not exactly the full picture either. When, for instance, the president spokesman denies that either the president or a White House official, quote/unquote, “ordered surveillance,” that doesn’t really deny very much if you understand how the foreign intelligence surveillance court records.

COTTON: It’s a judge that would order those things. And it’s the attorney general or her agent that would file that application.

COTTON: Joe, again, let me be precise in the language here. I have seen no evidence of that — of such a FISA order. However, as General Clapper said over the weekend, as I believe General Hayden has said on your program, it is not uncommon to have what’s known as incidental collection on any American citizen.