The Leftwing Billionaire Behind the Commercials Attacking President Trump 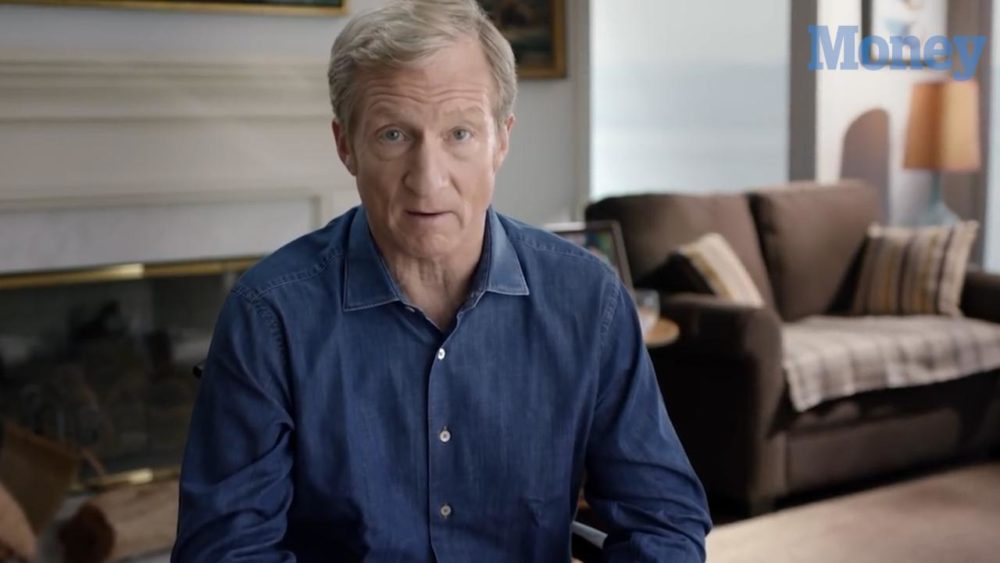 The citizens of this country have been inundated by commercials speaking of reasons for the impeachment of President Trump. It appears that the Progressive/socialists will stop at nothing to throw the duly elected President to the side in order to further the socialist agenda that they have put on hold for now. The corruption and unconstitutional maneuvers of the Obama administration are slowly being pushed back to the benefit of the American people.

One of the largest benefactors of this attempt to impeach our President is Tom Steyer, a billionaire environmentalist  whose own political ambitions include a possible run for the Senate from California. Speaking to CNN’s Dana Bash. Steyer could not make a reasonable compelling argument for impeachment. Speaking in platitudes, accusing of President Trump “acting in a lawless way” or “Violating the Constitution because he has violated the “trust of the American people through obstruction of justice by firing the head of the FBI, something the President legally can do without any reason and for any purpose. Claiming without any proof that President Trump has taken money from foreign governments without any proof is another reason why Steyer thinks the President should be impeached. All of the accusations are based on an unverified baseless dossier put together by a firm named FUSION GPS, a company that Steyer has good use of himself.

Before we leap on the impeachment bandwagon that Steyer has started up, let’s look at the background of the man making these accusations. In 2012 Steyer hired FUSION GPS and founding partner Glenn Simpson to investigate to help pass a ballot initiative taking money from California businesses and giving the money taken to clean energy projects. Proposition 39 in California passed mainly because of the $90 million that Steyer gave to various PACs to push it through. Proposition 39 promised to create 11,000 clean energy Jobs and promised $300 million to public schools. According to the Associated Press in 2015, there were a total of 1,700 jobs created and more than half the money promised to the public schools went to “energy consultants and auditors”.

Today, Tom Steyer is an icon of the left for his opposition to fossil fuels, and at the forefront of his opposition is the use of coal, which in today’s day and age, is the newest boogeyman to environmentalists and the federal government under Obama. Besides it fits with Steyers latest economic interests in solar and works to boost the value of the properties he is now attempting to bring forward. The Steyer fortune that he now uses in an attempt to collapse the coal industry was in fact made by a company he founded called “Farralon Capital Management LLC” that Steyer used to invest in coal in the Asian and Australian markets.

Trending: “We Need to Clean This Up”! Obama Lied About Hillary’s Email Scandal and Bribed the Investigation!

Not mentioned in the North American Press is the involvement of Steyer and Farallon in the coal market. No mention is made of Steyers ramblings through Jakarta and Sydney and the regional financing centers of Hong Kong and Singapore that shows the direct involvement of Farallon and Steyer  in coal transactions in those areas.

There are some facts that are already known that have not been made public, nor has the information been made visible to a majority of the American people:

Steyer was directly instrumental in putting together a portfolio  of investments unprecedented in scale which placed a majority of coal mines and coal fired plants under the control of Steyer through the Farallon Group. Using the enticement  with a tax avoidance program that funneled money to low or no tax entities in the Caymans, Mauritius and Singapore, this financing was done by Steyer and when he could not raise the money required for his Super Pac turned to Herb Sandler, the subprime mortgage lender instrument in the housing collapse of the 1980’s. Sandler was the originator of “Pick-A-Pay” which allowed lenders to pay less that interest payments increasing the principal.

The transactions made through Farallon for coal in the far east and Australia are estimated to exceed  $2 billion in total. The financing provided by Steyer enabled the unprecedented growth of the companies leading to one of the largest increases in growth of thermal growth ever seen. The growth was needed to pay the high interest debt that Steyer transacted the monies need for the growth, Highly profitable to Mr. Steyer, the largest of the coal mines and power plant buy outs in Australia and Asia were to produce 80% of coal in the area which was equal to about 28% of the amount of CO2 produced on the United States. Coupled with the fact that as early as 2000, Steyer and the Farallon Group had invested in the companies that were developing the Canadian oil sands, another boogeyman that Steyer is not fighting for environmental reasons.

While claiming to only be interested in the public good, and a vocal opponent of the Keystone pipeline, Steyer was a major investor with Kinder Morgan which is a company attempting to build a competitive alternative to the Keystone pipeline. What better way to make a profit that to use money to protest the competition until the government was all too willing to sell out the American people and close down Keystone.

Steyer goes on about Trumps “Russian connection” but fails to mention that he too has a Russian connection. In 2008 Farallon invested in Geotech Oil Services, one of the largest oilfield services comapnay in Russia. In 2010, he sold a portion of these holding to Gennady Timchenko, a Russian oligarch and friend of Putin, and the privately held investment group The Volga Group. The U.S. State Department has identified Timchenko and his activites in the energy area have been tied directly to Putin.

Steyer also invested 10.6 million in Proposition 56, a $2 per pack tobacco tax  but only he sold the tobacco comapines stock that were part of the Farallon Group hedge fund.

Russian businesses have funneled millions to anti-fracking organizations within our country in order to protect the interests of the Russian oligarchs. Through a Bermuda based company called Sea Change, a Russian based company in association with Rosneft and Russian energy based investment groups have funneled $23 million to Sea Changes, and along with Steyers Tomkat Charitable Trust, which donated $4.5 million have been financing the anti-fracking organization in the United States.

Steyer also has stated that he believes in unchecked illegal immigration. Coupled with his belief in choking environmental regulations that drives up the cost of virtually every consumer product from groceries to housing, his belief that he knows best and the citizens of this county do not need the mobility of having their own transportation but should take busses, and stifle the availability of affordable energy to the American people, this is the man who is espousing the President Trump is a danger to the country. Steyer is has commented about running for President himself. Would the death of the only Democratic Republic experiment that is the United States be far behind?