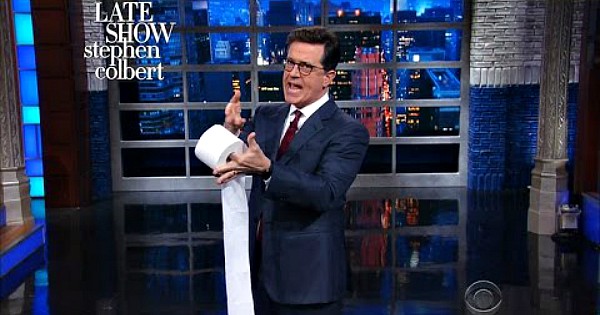 Liberalism is based on so many lies they don’t know which to believe from one day to the next until they are told.  There is a mountain of evidence against Hillary’s and Obama’s crimes and corruption, but the leftwing media chooses to distract the ignorant with their cover-ups.

Foolish libs believe they think for themselves, that conservatives are mind-numbed robots who have to be told what to think by their deceitful masters.  But Colbert just proved the opposite is true.  Liberals will have one opinion one day and must be retrained to believe a different lie by their leftist masters the next day.  Ignorant people don’t exercise critical thought and are easily led around by the nose.

Colbert has to retrain the monkeys

Liberals cannot tell the difference between the righteous indignation of Republicans over Comey’s flip-flopping and their own frenzied paroxysms of their love/hate relationship with the truth.  They cheer Comey’s firing because they think he sabotaged the election for Hillary with the email investigation in which she actually committed a crime, but are told they must boo his firing because they are told he is the only person in the FBI investigating their Russian fantasy.  In nine months of investigations, leaks, and anal probes, not even microscopic evidence has been discovered to even assume there is any truth to their allegations.  But with leftists evidence is inconsequential because only the “seriousness of the charge” they make matters in their limited intellectual capacity.

Last July Comey, as the investigating director, had no right to say that Hillary should not be charged with a crime.  That is the responsibility of the Justice Department.  But everyone knew the fix was in when he stood up as the scapegoat.  Democrats knew that if racist, leftwing radical AG Lynch did it there would be an uprising against Obama by the mushy middle.  There is no stipulation in the law that if you did not “intend” to commit a crime then you are not guilty.  What do you think the definition of 2nd Degree Murder to be?  That’s when you kill someone you did not “intend” to kill while committing another crime.  Hillary got the staff at America’s Libyan embassy in Benghazi killed with her negligence as her emails proved.  But Americans are to believe that without Comey the FBI will not do as directed by Congress and investigate Trump.  What Democrats are enraged and frightened about is that Trump is putting people in place that will stop the criminal leaks and conduct an investigation of Obama’s criminal surveillance of Trump.  Instead, Democrats say Trump firing Comey is Watergate corruption, while it is actually the opposite of Clinton’s White Water firing of his FBI Director.  They report that Comey was fired because he asked Trump for more funds to investigate his Russia connection.  This fake news is easily perpetrated on ignorant liberals who don’t understand the first thing about how the FBI and government operate.

Are We Missing the Mother of All Scandals?

The Washington Establishment vs. The President of the United States

Picture this: Democrats investigating Trump/Putin collaboration are looking at a microscopic hole in the ground, like an archeologist wanting to dig a hole while right behind are the Pyramids of Giza displaying a mountain of evidence of how that Hillary and the Democrats screwed Sanders in the primaries, committed crimes and corruption through her illegal emails, and committed massive, though thank God, unsuccessful voter fraud.  But the worst of it is the cover up of Obama’s Watergate-style spying on Trump.  What they see in that microscopic delusion is a vast Russian complex under the Trump administration.  It doesn’t matter to them that Obama had vowed to be Putin’s puppet in 2012, while Putin and Trump are at such odds in the Middle East that it may lead to open conflict, just as it doesn’t matter to them that Democrats have been perpetrating massive voter fraud for decades.  But when Trump announced the new FBI Director would be investigating voter fraud they scream like stuck pigs!  Democrats have been fighting to keep the borders open so that illegals and drugs can continue to come into America.  Can anybody guess why?

Leftists are taught that socialism is fair and just for all.  They have no education on the reality of socialism and no understanding that it is not liberty, but a throwback to totalitarianism.  Just reading the different aspects of the reality of socialism and what liberals believe socialism to be sheds light on their reality free delusions of Utopia.  In their minds everything should be a right and provided to all people equally for free.  They have no comprehension that they are demanding that doctors and nurses be made slaves of the state.  But as the party of slavery that they would endorse servitude is to be expected.

Life, Liberty, and Property – the tactics of Socialism

Socialism is fair for all

President Trump made a commencement speech at Liberty University that was the epitome of American patriotism.  Leftists say it is Trump who would steal American wealth and American liberty.  Their latest – that “Trump is so stupid…” or “Trump is working with the Russians…” that “he spilled Top Secret intel to the Russians” is so obviously another liberal lie that is designed to smear Trump in the minds of leftists.  Wasting any time discussing it is an exercise in futility to obviate liberal irrationality.  Leftists will believe Trump is Satan and Obama is the Messiah.  After ten years of Democrat’s taxes, deficit spending, job crushing regulations, and tearing down America’s power and influence throughout the world, those who believe Democrats are patriots and Republicans are the thieves have their heads where the sun don’t shine.  How can you expect rational or patriotic thought from people who have been aiding America’s enemies to invade, corrupt her culture, and arm and overthrow their governments?  Obama assisted the Muslim Brotherhood to renew the Jihad and Americans stupidly gave him their tax dollars with which to do it.  How do they believe Trump would betray America?  Easily – because they are the ones betraying America!  Why are Republicans so reticent about opposing them?  Could it be that leftists are threatening their family’s lives as they always do?  Evil people know there is no better way to control others than to threaten their children.

Liberal stupidity is a pre-existing condition

More liberal stupidity over Comey firing and around the world