Are the French to Relocate to the Moon? 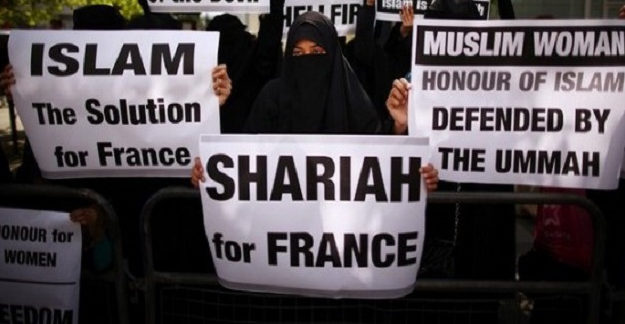 “Are the Germans to Relocate to Mars?”

The forces of disorder besetting Europeans of all ages raise urgent questions. Are the duped muslim proxies for the NWO invading with quiet assumptions? Is the takeover of Europe a highly systematic and rigid incremental plan “Gramsci style”? Or does anyone have a plan for the next phase…

At the moment in history of this writing, one can only speculate. But speculate we must! Or the next phase of the 21st-century forces of disorder will be gruesome, barbaric and, indeed, bloody!

Is everything conveniently going, as planned, for the New World Order? Or in addition to populism, is life even more difficult for them? For decades, it was their Samuel Huntington belief that “a clash of civilizations” between Christianity and Islam was inevitable. They could count on, plan, and profiteer, from this socially-engineered scenario.

This was perfect for their global de-populating agenda to bring the world down to 2.5 billion, or even 500 million, recommended by Club of Rome assessments. For globalists, in their draconian and survival-of-the-fittest eyes, billions of Christians and Muslims would kill each other off, as the globalists would vacation in the southern hemisphere.

To achieve an effective Divide-and-Conquer war scenario between Christians and Muslims, though, the Christians had to cooperate in resistance. But what resistance? Even though C.S. Lewis proclaimed pacifism is not in the Bible – and the Church has solid definitions for a Just War – there so far has been no appreciable resistance. The Charlemagne mentality is far in the past. Yesterday’s Muslim-repelling Normans are degenerated into liberal cults of softness.

The globalist/internationalist/communist/Alinsky ilk, counting on what Hitler warned of – that liberalism would soften Europeans to the point of allowing invaders to conquer them – have so far achieved success with the placement of millions of Muslims in Europe. Muslims are the perfect proxies for de-stabilizing and de-nationalizing in the New World Order geopolitical endgame.*

And Muslims are the perfect dupes, as sinister Gulen-funded Erdogan has realized too late. For as Muslims routinely vandalize European churches, illegally sleep in and around them, even steal from old women praying inside and rape young women nearby, the Temple in Jerusalem will arise with little to no resistance.

But one can’t have liberalism and a rugged Divide-and-Conquer, too. Globalist expectations have hit a snag. Conquering through immigration and colonization – through Trotsky’s Marxist multicultural agenda to de-nationalize – is not working. With no resistance to Islam, there is no Divide-and-Conquer, therefore no decrease of billions in world population, and the Beast in Brussels configured for only 2.5 billion accounts worldwide, is delayed.

Should the French be sent to the moon? Should the Germans be sent to Mars? Or should secular liberals, Christianity and Islam be exterminated through pharmaceuticals contrived for global eugenics? The Alinsky-focused result – to reduce everything to rubble and rebuild – one way or another, is at hand. To avoid the unpleasantness of it all, the globalists are unable to go to Mars or the moon. So Antarctica is the next best place.

Will we all be waiting for WWIII, while soldiers and civilians are administered the real eugenics program through profiteering vaccinations and airborn viruses? The half-day nuclear war in the northern hemisphere, planned for decades, will de-populate the invading Muslims as well as liberals and Christians. Get them all into the northern hemisphere and destroy them.

Conquest by immigration colonization, eugenics and nuclear war? It seems the globalists have no other choice. And when the world has had enough, the remnants will syncretistically unite via the Mason-supported Temple in Jerusalem, which Christ proclaimed desolate, and from which the Abomination which causes Desolation will rule. The globalists will have achieved their purposes, the Beast in Brussels computer can now be activated for the cashless system… and the Isaiah-prophesied “Jacob’s Trouble” will now begin.

* Hitler’s warning on liberalism is in the Exchange of Communications Between the President of the United States and the Chancellor of the German Reich, April 1939.