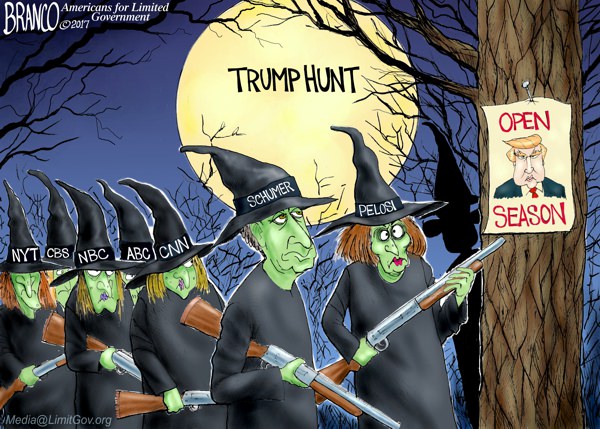 President Trump tweeted, “I’m being investigated for firing Comey by the man who told me to fire Comey!”  What more perfect representation of backstabbing, two-faced leftist ideology is there than that?

What do the Spanish Inquisiton, Salem Witch Trials, Hitler’s Germany, Stalin’s Russia, Mao’s Red China, and Muhammad’s Islamic Sharia Jihad have in common?  All are totalitarian leftist dictatorships in which the righteous thinking people are persecuted and crushed.

[As this article goes to publication the media has spent the weekend alternately damning Trump as psychotic claiming he is being investigated when he is not, and singing praises for the investigators for investigating of Trump.  These mixed messages that require alternate realities are why the people have no confidence in the liberal mainstream media because they produce no trustworthy information.]

Trump’s tweets are awesome.  Deputy AG Rosenberg, an Obama appointee, instructed Special Prosecutor Mueller, Comey’s best friend, to investigate Trump for firing Comey.  Mueller, who is supposedly pure as the driven snow like Comey, leaked this while his office denies it.  It’s not psychotic, nor is it two-faced.  It’s a deliberate effort to force Trump into an error for which they can charge and impeach him.  This is how the Left wants to make their case for Trump obstructing justice by claiming he is interfering with an investigation into a crime that doesn’t exist.  In addition, Mueller has gone far beyond his authority and now wants to investigate the finances of Trump and all of his family, businesses, associates, and administration to find evidence someone got payment from Russia – not because there is evidence of this, but because they want to dig up all of Trump’s dealings to find something with which to charge him.

This is a violation of the 4th Amendment and the basis of a witch hunt.  The Constitution protects citizens from having authorities conduct searches of their property without just cause.  An accusation is not ‘just cause’ though liberals would make it so.  You must have evidence of a crime before you can search for proof.  But there is no evidence Trump colluded with Putin because it didn’t happen.  Liberals just keep thinking there is evidence they can find if they just dig deeper.  To a liberal an accusation is proof of guilt and you are guilty until proven innocent.  This is the basis of leftist justice which is why everyone fears dictators.  Proving you didn’t do something is a thousand times harder than someone proving you did do something.  A negative cannot be proven.  Leftists say we must prove God exists.  There is ample evidence that the universe and life exists.  How about leftists prove God doesn’t exist?  But while leftists accept accusations as proof of guilt, at the same time they disregard proof of their own guilt.

This is the liar’s clause: Deny the truth and declare their lie to be the only truth, and then tell that lie long enough and loud enough until it becomes the only truth people know.

1:  a searching out for persecution of persons accused of witchcraft

2:  the searching out and deliberate harassment of those (such as political opponents) with unpopular views

A modern Witch Hunt is a process by which those who are corrupt will abuse their power to create a crime committed by those they wish to persecute.  This is why Democrats should never be given power and all those remaining Obamaites who Trump has left in positions of power should be swept away.  McCarthyism needs to be brought back to America to destroy the communist left that has been successfully subverting this great nation for the last sixty years!

If you want the truth, the whole truth, and nothing but the truth then you should be listening to people like Rush Limbaugh and Tucker Carlson.  All that the liberal networks do is lie and make excuses to cover up Democrat crimes and corruption.  Like the shooting on the GOP baseball field, they speak out of one side of their faces saying they do not condone violence as they scream for blood from the other.  As evidenced by their deeds, if a liberal says they believe in truth they LIE!  If a liberal says they believe in peace and love they LIE!  And if they even hint at saying they believe in justice – they LIE!  When they came together to pray after Republicans were shot on a baseball field it was for a photo op, not for unity because there is none!  When President Trump’s video played praying for unity and peace they cursed him.

This investigation is not a search for truth or justice.  This is a witch hunt by which they plan to destroy the righteous.  The fact that Donald Trump is not only succeeding in defeating their efforts, but that he continues to move forward with his agenda makes them go insane with rage in their hate!  As Rush explains;

“They actually contemplate that as though, “Oh, my God!  Do you realize this could happen?”  It’s kind of like Charlie Rose and Brokaw discussing the fact that they didn’t know who Obama was and were gonna vote for him anyway.  They’ve just awakened to the reality here that it’s been two years and nobody’s laid a glove on the guy, not really, not in terms of making him quit.”

The Left are condemning Trump for “impugning the investigators of his crimes” saying it is wrong to do so.  They obviously forgot about what the Clinton war machine did to Ken Starr as he was investigating Monica Lewinsky smearing him as a sex pervert and even declaring he is an alien from another planet!

They believe they can impeach Trump for working against Democrats and undoing the damage Barack Hussein Obama did to the nation.  The answer is we couldn’t impeach Obama in eight years for actually working with America’s enemies!  The Constitution is constructed so that the three branches of government form checks and balances against the power of the others.  But congressional Democrats laid down for Obama’s dictatorship and Republicans followed suit.  That put the onus on the courts, most of which have been corrupted by the Left and they, too, gave free reign to Obamaism.  This left only the states to form a convention that never materialized.  Only by the fact that Democrats were being disempowered by the people over the last eight years and now hold next to no political power in the country has America been saved.  But the leftwing media still holds sway over most of the population despite people tuning them out and turning on to the truth in media which only comes from conservatives.  Obama’s fascist armies are running rampant on campuses shutting down free speech and rioting without being expelled and psychotically claiming to be anti-fascist.  That there are people who believe in them is the gravest symptom of the mental sickness that communists may have terminally infected American culture.

The Left wants to prevent debate from taking place

Leftists have no internal lie detector

America haters call Trump’s election the “Pearl Harbor” of Russian invasion.  For them it is their Pearl Harbor that they just got blind-sided by the people who have opened their eyes to leftist lies!  Democrats believe they can snooker the people the way they did to get rid of Nixon and save Clinton, and the way they have over promoting the global warming fraud and importing Islam jihadis.  But American’s are seeing through their façade and realizing that their freedom and their lives are at stake.

The most important question is; does President Trump realize that Democrats will never look at him in any way other than as their enemy who must be destroyed?  Does he understand that anyone who would make America great for Americans is their enemy?  Does Donald Trump know with whom he is dealing?  Like the Israelis and the Arabs, Israelis know that if the Arabs laid down their weapons there would be no more violence, but if Israelis lay down their weapons there would be no more Israel.  Do the majority of Americans understand that if they give in to Democrat’s demands for power that there would be no more America?  Do enough people realize that the land of the free and home of the brave would be fundamentally transformed into a socialist banana republic dictatorship where the only freedom is to do as the government commands?  President Trump has empowered conservative Christian America to save itself from the invasion of leftist depredation.  Can he truly turn the tide?