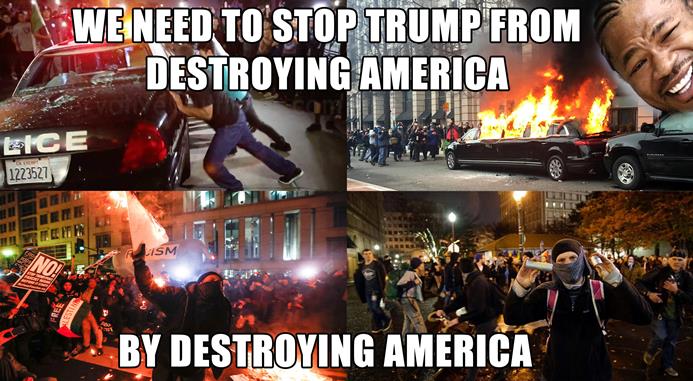 American Democrats have become a blight on the nation, but it’s not like that hasn’t always been the case.  Alinsky has shown them the way, but Machiavelli preceded him and predicted his subversive teachings.

Democrats distract the rabble from what matters.  The leftists divide the liberals by race, sex, religion, and economic status, and tell them to look at what doesn’t matter by inventing lies to cover up their own agenda.  This encourages people to become deluded, believing in things that aren’t relevant to reality, so that Democrats can take away their freedom and enslave them either through tax debt or as welfare voters.  They say those foolish enough to believe that Republicans want to kill everyone and destroy all life on the planet to feed their greed.  Meanwhile, Democrats breed greed and envy in their thoughtless followers.  What kind of fool believes Republicans are the kinds of fools who believe they will benefit by killing the planet?  When they can control voter fraud by giving foreigners the rights of citizens they’ve decided they don’t need working white men, just those who can be taught to hate them.

The kind of fool who believes Democrat propaganda believe they should:

Distractions – look how everyone comes together after a terror attack to offer their sympathies for the victims.  Welfare helps those who cannot help themselves.  The sea levels are rising and the land is drying up!  Russia stole the election.

Divisions – Republicans are the KKK and hate Mexicans, gays, women, dark skin, and the poor.  They are all WASPs that want to keep everyone who isn’t a white male oppressed.  No women, blacks, Hispanics, or gays should be Republican or even Christian because the white man’s God is evil.  Jesus was black and is dead, killed by rich white people.

Delusions – Democrats believe that the KKK changed parties.  They believe that their party does not divide people by every demographic group, but that Republicans do.  That they are not demagogic fear mongers, but Republicans are.  And that their policies are beneficial to the masses, while Republicans want everyone on the planet to die.  Russia changed the presidential vote and Hillary won the presidency.  Obama didn’t do worse than Nixon and he isn’t a Moslem.

Destroy – They don’t see that Obama was the Left’s Trojan Horse who tore down America for Democrats who want the Constitution abolished.  That Democrats want to remake America into their communist banana republic and think it will be Utopia!  These are the dysfunctional, dystopic beliefs of liberalism that is born of ignorance and bred on immorality until they become the soul of hypocrisy and all things negative.  By the time it gets to this point it will be too late for them and they’ll drag the rest of us down with them.

On the magnet of righteousness the Left is the negative pole and the Right is the positive.  The Right believes in God, Christ, responsibility, faith, hope, charity, and the Ten Commandments.  The Left believes God is the oppressor and Satan is the liberator, or that any deity is a fantasy because they cannot perceive them through their mortal senses.  They believe that others owe them a living because they are told that those who work for a living are stealing from them.  With the righteous the glass is always half full, but for the wicked, the greedy, the envious, the glass is always half empty.

Democrats are the ones who fought to keep slavery in the Constitution and then fought a war to keep from ending it.  They re-established their plantations through the New Deal to keep blacks on welfare as their voter slaves.  And they fought against Civil Rights, but told blacks a Democrat president gave them their rights, even though no Democrat in Congress voted for them, so they owe them their loyalty.  Finally, Democrats, who were originally the Federalists, fought to have the presidency be a kingship to make the one they chose as their leader America’s dictator for life.  But the Democrat masses are completely ignorant of all this.

The Democratic Republicans of Thomas Jefferson later became the Whigs and then became the Republicans.  But ask the common liberal about that and they think Thomas Jefferson, Abraham Lincoln, and Teddy Roosevelt were Democrats.  Liberals are ignorant to such a degree that they don’t know more than a few words from the preambles of the Declaration of Independence and the Constitution.  They don’t believe Creator means God, but government.  And they think that Democrats who steal the wealth of the nation are doing so for their benefit.  What else would you expect from people who believe they have the power to control the climate of an entire planet?

Science has proven that every decade a massive volcanic eruption puts more CO2 and pollutants into the atmosphere than mankind has done since the beginning of the Industrial Revolution.  But liberals believe cow farts cause global warming.  They think the sea levels are going to rise till they drown the coasts and all that extra water will not rain down on the land which will become a desert.  It’s backwards thinking, a mirror of reality and good sense.  Liberalism is what you get when you either don’t educate the young barbarian or mis-educate the fool.  Islam has proven that brainwashing works wonders and you can convince people that they are the most civilized of people for whom killing themselves while murdering others is a godly act for which they will be rewarded in Paradise.

Einstein said, “There are two things that are infinite – the Universe and stupidity, and I’m not certain about the former.”

Machiavelli, who wrote “The Prince,” was not a nefarious character in history that leftists portray him to be.  He wrote the leaders about how to root out deceivers and plotters who would overthrow the rightful government to establish themselves as dictators.  Leftists teach that Robin Hood “stole from the rich and gave to the poor” when what he did was fight an oppressive government for the people.  Democrats are not Robin Hood, they are Prince John.  Liberals don’t know or understand the history of the Magna Carta that established the rights of lords against the dictatorial powers of the king, or the Constitution that established the rights of the people against the powers of the lords.  America only remains great so long as her people remain educated, and the Left has taken over and corrupted America’s education, entertainment, and media to subtly and utterly warp their thinking.

The election of Donald Trump is not the endgame solution, but only the beginning.  President Reagan showed the way to turn back Democrat’s seizure of power.  Now it’s up to Trump to start unravelling the web of Democrat lies, deceits, and theft of American power and wealth.  This fight will not just take two terms, nor a generation.  Evil never rests until good is destroyed.  Islam is proof that Muhammad created the greatest evil empire in history by enslaving the minds of billions to believe that murder is righteous.  Fighting evil is an eternal struggle that each generation must face, and American Christians have left their children to the ravages of the wolves with their complacency.  Weakness of spirit, confusion, and temptation has led America astray to the point that killing babies in the womb has become a right.

We don’t need a new Inquisition to do what is wrong.  We need a revival to learn what is right.  Killing those who we believe do wrong is what the Left does through men like Hitler, Stalin, Mao, and Muhammad.  We need to educate people to understand what is right.  It’s not about forgiving criminals who embrace evil, but about teaching our young to not become criminals.  Democrats took the power of the people and gave it to the criminals.  They endorse them because they are the criminals!  They are the greedy lords, the kingmakers, the slavers, the mobster kingpins, the union bosses, the drug dealers, the deadbeat parasites, druggies and thieves, and the fools who follow them.  They smear police as pigs and soldiers as baby killers when their abortionists have killed more babies than even all their socialist dictators in all their wars combined.  Enabling wickedness is what got us to where we are today.  Root out the corruption from our government, voter fraud, welfare parasites, and foreign invaders, and restore America to the citizens and take back our rights that the Democrats, their corruption, and their courts, have taken away.