Deconstructing America: the Left’s Fight to Rewrite our History 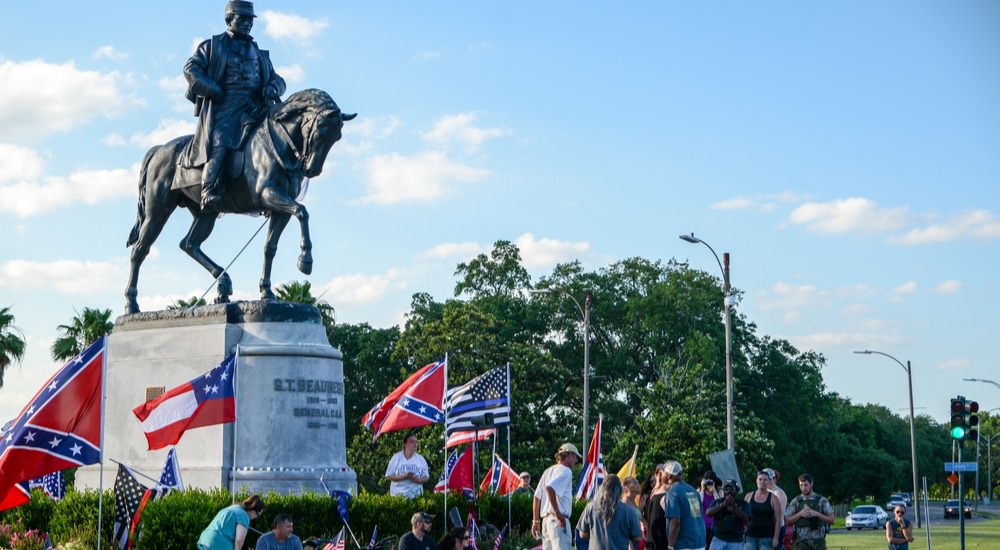 Constitutional conservative minded Americans must stop the recently accelerated movement to remove Confederate Monuments, because it is a tool used by the racists of the regressive Democratic Communist Party and the Black Caucus to gain more power and destroy our Constitutional Republic. Their campaign uses “white supremacy” as an excuse to attack the Western and Judeo-Christian principles that built America; and in their zeal to create a sanitized fantasy world, where nothing bad ever happened in America’s history, they are destroying both American and Black history and eliminating anyone, and anything, that they deem to be “racist”, from the public square and the annals of history.

States like Mississippi, North Carolina and Tennessee already have laws protecting their historical monuments, while the monuments along Richmond’s Monument Avenue rest in a protected historical park. Alabama recently extended such protection to its monuments on May 24th 2017 through the Alabama Monument Preservation Act.

Now Baltimore Mayor Catherine Pugh and former mayor Stephanie Rawlings-Blake, who allowed Baltimore to be torn apart by riots, are leading the movement to remove the Roger B. Taney Monument, on Mt. Vernon Place, and the Robert E. Lee and Thomas J. “Stonewall” Jackson Monuments in the Wymann Park Dell. The approximate $600,000 price-tag is the only thing that has stopped them so far, but they are considering auctioning them off.

In St. Louis, Mayor Lyda Krewson and city treasurer Tishuara Jones are leading the charge to remove a 32 feet tall monument in Forest Park, dedicated in 1914, that depicts a Confederate soldier leaving his family for the Civil War. An angel hovers above them, and the inscription reads, “in memory of the soldiers and sailors of the Confederate States By the United Daughters of the Confederacy of St. Louis”.

Those people willing to eradicate the Confederacy from America’s consciousness seem to forget many things. They forget that Jefferson Davis, although an advocate for slavery, was a hero of the Mexican-American War, a former U.S. Senator and Secretary of War for the United States. They forget that many Confederate Veterans fought with distinction in the Spanish-American War and they are American Veterans, who received pensions and benefits by an act of Congress.

As Senator Gerald Allen of Alabama recently noted: “… history itself … it may be good, bad, or ugly — you can’t whitewash it … When you start removing monuments and statues … in a sense you lose history.”

By and large, most Southerners really do wish to simply preserve the history of these Confederate heroes and their Southern heritage. They have long set aside their racial prejudice, on the whole, even if it was a struggle getting there.

However, America could destroy every Confederate monument and that would still not satisfy the Left, especially the Black Caucus and some black and Hispanic communities across America. They would continue this cultural cleansing aimed at white society. Behind their remorseless drive against white culture is an egalitarian extremism rooted in hate and envy.

Democrat Rep. Reginald of Arizona fumes over “six [Confederate] monuments … using tax payer dollars to actually prop up … terrorism of its day”. He has yet to denounce the radicals and the Leftist terrorism that is surging and becoming increasingly more violent.

Last month, hundreds of illegal aliens tried to ban U.S. citizens from a city council meeting in Cudahy, CA. Shouts of “white supremacists back to Europe” were fired across the halls and outside.

In an August 2013 New Black Panther Broadcast, Samir Shabbaz said, “You’re going to have to kill some of these babies, just born three seconds ago … go into the God damn nursery … and just kill everything white in sight …”. His hate-filled rant called for bombing white churches and “[burning] up some cracker white supremacy”, if blacks wanted to be free.

In January 2017, a Black Lives Matter activist in Seattle, a preschool teacher, calling for reparations and the confiscation of white property, said, “We need to start killing people … F**k white supremacy, f**k the U.S. empire”. And then on Flag Day, we were horrified to witness a Bernie Sanders Leftist gun down Representative Steve Scalise (R) and Matt Mitka, both in critical condition at this writing, along with Capitol Police Officer Crystal Griner.

I wonder if these Leftist and Democrats have forgotten that free black men owned slaves prior to the Civil War too?

Some free black men owned family members to protect them, but there were plenty like William Ellison, one of South Carolina’s largest land owners, who were in the slave breeding business for profit. Ellison even sold one of his own daughters into slavery.

Former Secretary of State Condoleezza Rice told Fox News on May 8th 2017: “I am a firm believer in ‘keep your history before you’ … Confederate heroes should be viewed in the context of their time instead of through the prism of modern values.

Where does this end? Are we now expected to dynamite half of Mount Rushmore out of existence and topple the Washington Monument? Are we expected to rename Washington, D.C and other cities across America like Jefferson City, Missouri? The Left and the Democratic Party would tell us that “Yes, we expect you to do deconstruct America”.

The dead stones of the Confederate monuments honoring noble men on the wrong side of history are cut from the virtues of their day and harmless, even if some say they symbolize the evil done by the real monsters from the Confederate and Jim Crow eras. Those monsters are a long time dead, long passed. The monsters of the regressive Democratic Party, those Communists, Black Lives Matter and the New Black Panther Party and LARAZA are here today, in the here and now, with us.

Some of these Leftists and Democrats are just as evil, if not more so, as the most evil slave traders in American history. They claim to be fighting against “white supremacy” and the racism it perpetrated, but in return, they offer black and brown supremacy, intolerance, racism and hate directed at white people in general. They embrace an anti-American ideology that leads to the abuses and slavery that they claim to despise — the “re-education camps” and the gulags — as they attempt to foist their fractured fairy tales upon all America. They are the very monsters they claim to fight.

The Long Road to Freedom is being deconstructed. The Road to Civil War is being paved.