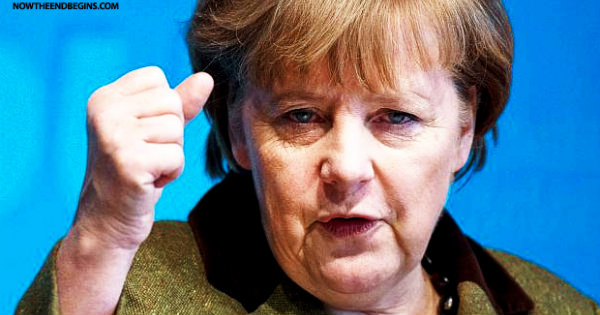 Folks, I see trouble on the playground. Angela Merkel decided to tell her spokesman Steffan Seibert to inform us all that , “The Chancellor regrets the US government’s entry ban against refugees and citizens of certain countries.”

Aw.. does idle biddle Angela have something to say? I guess so because she spoke to our President on Saturday. Angela, who must know what is best for the United States because she is Germany’s Chancellor, feels that the U.S should have an open door policy to terrorists. After all, she didn’t mind opening the door to terrorists who slaughtered innocent Germans so why won’t President Trump play along as well? Plus, there are other girls in the world that don’t want that mean ole Trump to be in charge so why shouldn’t she jump on the pigtail wagon? Plussss… that bully Trump started it because he said she shouldn’t let people into her country who will kill people in her country. And he shouldn’t have said that! And what’s more Elizabeth Warren is on her side… so there!

Did Angela Merkel actually say all those things that make her sound like a baby? No. I did. Do I personally think it is out of line to mock a world leader, to act as though I know best about policies in her country when she is the one who has to answer for them? Actually yes, yes I do. I see the earlier paragraphs that I wrote as a breach of boundaries. But I won’t apologize for them because both Chancellor Angela and Senator Elizabeth are seriously crossing boundary lines of administration that do not belong to them and if they choose to do that in regards to the American people.. some one has to play yard duty,

So I will pretend to speak to them as girls on a playground, as girls behaving badly.

“Angela and Elizabeth, the vayjay march is over. I understand that you are angry that you did not get to wear a special hat and say a special speech. I understand that you did not want one of the boys to be picked to lead the new game. But remember? Everyone voted and Donald was chosen. Yes I know that you wish Hillary was, but Donald was.. and remember.. good sportsmanship is important.

Elizabeth, I know you were playing this game before Donald was picked to lead …and maybe you feel that that makes you the leader. But remember? We are practicing respect and one of the rules we respect is that if other kids vote for a leader we need to let that person be in charge..even if we really really want all the other kids to follow us. If you won’t do that you will not be allowed to play the game Donald is leading. I want you to stop stirring up trouble OK?

Angela, you have your own game that you were picked to lead and it looks like some of the kids you allowed to play are pushing others around. Would you like me to ask Donald when he is done if he would come help you talk to those boys? Oh? You think you can handle it? Ok.. why don’t you go back over there and play with your friends.

Girls, I really hope that I won’t see any more of this behavior out here. If I do I will have to have you stand over there by the wall.”
I have addressed these women by entering the world of make believe because it seems to be the world in which they live…but now I will speak clearly.

What kind of personal issues create a codependency so insane that leaders insist on the right to protect abusers even if their innocent people are victimized? Is it really hospitality to invite rapists into our home so that they can rape our children and YouTube it? There is so much talk about providing a safe haven for those in war torn countries… and the truth is that if some of these people were not coming and demanding Sharia law, not attempting to force their culture complete with death wishes for those who don’t convert, if some of these people were not mistaking our kindness for weakness… then I would totally support their immigrating without extensive vetting. But that is not the case.
A rhetoric which uses ideas of compassion, religious and ethnic freedom as its calling card is enabling abusers.

I believe that those who are pro death…of infants… of innocent citizens…in any country … should be put in TIME OUT.

There is a theory that people protect those who are like them…that abusers protect abusers…that those on power trips protect those above them and squash those beneath.

Our president has begun his presidency by watching out for the underdog. Anyone else notice that? I mean, how hard would it be now that he has power to just crush those underneath him? But I’m watching a man who stands up for the powerless,
the unborn, the American worker stripped of rights, the unarmed woman in the street who does not want violence welcomed into our country.

I am watching this man take a stand to protect us. He is willing to feel the heat of power hungry folks …so we don’t have to. I have seen mockers jab at his children and wife and an unprecedented time of bullying attempts where a teacher who should be on yard duty is threatening to kill him. Hollywood acts as though they are the next holy wood as they try to incite their own jihad.

So Angela and Elizabeth, I may not be a Chancellor or a Senator, I am just one of the little people who you would just as soon see beheaded to forward whatever power trip you are on. Even so I want to send YOU a message…I, and the people of the United States of America who voted Trump into office… the people who stand behind our president….We choose Donald as team captain.