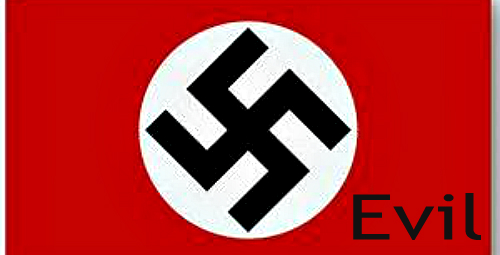 This columnist receives a thousand emails a day which makes it impossible to respond to every one. The majority are positive and supporting while many others are attacks from readers who just want to fight and bring attention to themselves, as all columnists will attest. First some background:

While touring with The Royal Lipizzaner Stallion Show where I served as Chaplain and gave the historic narration (to earn my keep), General Patton was credited for saving the Lipizzaner’s from the Nazis during World War 2 who planned to kill them and basically make hamburgers out of them.
At many of the arenas we performed in, especially in Canada, elderly Nazis would come back stage by one or two to confront me and demand that I not include that in the historical narration. “That is wrong!” they thundered indignantly, “The Nazis had nothing to do with that.” But they very much had something to do with that, indeed everything to do with it. I was intimately familiar with that history.
The email below came from an elderly Nazi who took me to task for comparing hunting for sport with Nazis and others who actually enjoy torturing captives which was detailed in my piece, “Trophy Hunter Dies in Fall while Stalking Animals,” which was published on News With Views. It was that comparison that lit this man’s fuse.
Here is his email to me exactly as written. Notice his misuse of Christian references:

Sun.Jan.8,2017
From Rheinhold Sommerstedt
Subject: Thou Shalt Not Bear False Witness
Dear Chaplain Miles,
I have read your judgmental article about career and accidental death of Italian trophy hunter, Luciano Ponzetto.  I generally agree that in these days hunting merely to boast is highly inappropriate.  The Commandment makes a clear distinction between “killing” and “murder.”  You have made such a case.  We do not celebrate nor condemn to hell any sinner.
However, your slanderous statement about Nazis in the excerpt from your text below is far more reprehensible, destructive and deadly than shooting game for sport.  It is also an abominable violation of the Command of our Father.
Excerpt You Wrote:  “It is to be noted that these mentally unstable people actually enjoy causing living creatures to suffer. They seem to enjoy that feeling of ‘power,’ the same as the Nazis who tortured their captives.  In countries like Venezuela, young soldiers are taught that when they torture someone, causing them to suffer, they become a man.”
The Commandment:  “Thou shalt not bear false witness against thy neighbor.”  Though it may be unwitting,  your violation of this commandment is nevertheless rendered even more abominable when presented by one professing to be a Christian minister, scholar, historian and analyst.
Your readers presume and trust that you have been diligent about what you express in your teachings.  Especially when making purported statements of historical fact.
I can understand that you have been subjected to continual false reports. especially about the Christian Nationalists of the German Third Reich.  Yet, because you are a professing scholar there can be no excuse for bearing false witness and not conducting a diligent search to discover the truth.  Our Savior Yeshua promised,  “You shall know the truth and the truth will make you free.”  When you bear false witness you proliferate the falsehoods that drive the deceptions of the Synagogues of Satan.
There exists a vast body of knowledge and genuine history about the German Third Reich.  No honest scholar can refute the revisionist historical review without reading such texts and presenting valid arguments that substantiate the truth of the all too common conventions that allow false witness and slander upon which to predicate your commentary such as cited above.
I am confident that you often make such reference to support your sophomoric commentary.  Most people grasp the significance of the ultimate excuse:  “The Devil made me do it.”
Consider this private admonition my first step of Christian discipline as rehearsed in the Word given here below:
Deuteronomy 19: 15-20   “Moreover if thy brother shall trespass against thee, go and tell him his fault between thee and him alone: if he shall hear thee, thou hast gained thy brother. But if he will not hear thee, then take with thee one or two more, that in the mouth of two or three witnesses every word may be established.  And if he shall neglect to hear them, tell it unto the church: but if he neglect to hear the church, let him be unto thee as an heathen man and a publican.  Verily I say unto you, Whatsoever ye shall bind on earth shall be bound in heaven: and whatsoever ye shall loose on earth shall be loosed in heaven.”
“Again I say unto you, That if two of you shall agree on earth as touching any thing that they shall ask, it shall be done for them of my Father which is in heaven. For where two or three are gathered together in my name, there am I in the midst of them.”
Just about everything you have been told about the German Third Reich and American History is false. This Great Deception is designed to destroy Christendom.
You may choose to consider my challenge to be that of a hateful man.  That response will have been programed by the Enemy of Christ.
If you accept my challenge I shall do my utmost to help you conduct your own diligent inquiry.  The Bible teaches all of this.  In addition, one must be circumspect to diligently investigate actual history to become able to rightly divide the truth.  To unravel this particular deception there is a place to begin in secular history, just prior to the year 1900 and proceeding through that century and continuing until the present day.
READ:  ” A Short History of The Balfour Declaration”  http://www.banesreview.org
From that resource you can deduce the cause of the recent 100 years of continual wars of aggression that destroyed vast areas of human habitation,  murdered more a than 100 million innocent people and enslaved billions even now.  To understand who is doing this you need only to understand this simple Christian Principle:  “Thy word is a lamp unto my feet and light unto my path.”  With such trustworthy guidance you can become an overcomer in this tormented world beset by the Legions of Satan.
READ also:  “The Protocols of the Learned Elders of Zion”  A free interactive copy is available at:  http://www.bibleblebelievers.org

Because the website reprints antisemitic material such as The Protocols of the Elders of Zion and Henry Ford’s The International Jew,[1][2] and Holocaust denial material from authors such as Bradley Smith and Mark Weber, a complaint was lodged under Australia’s Racial Discrimination Act.[2][3][4][5] In 2007, Justice Richard Conti of the Federal Court of Australia ordered Anthony Grigor-Scott to remove from the website antisemitic claims that Jews deliberately exaggerated the number of Jews killed during World War II.[3][6]
However, the order was overturned on appeal due to a legal technicality: “Bible Believers Church” could not be sued, since it lacked legal personality, and the Human Rights and Equal Opportunity Commission Act 1986 (Cth) (HREOC Act) would not permit (in the same proceeding) its substitution with another defendant who could be[7]

Bible Believers were described as “[o]ne of the most visible of the plethora of eccentric pseudo-Christian groups in Australia” and “extremist” by the Australia/Israel & Jewish Affairs Council (AIJAC) in their 2008 report on antisemitism in Australia.[8]

Americans cannot repent because American will not confess

NO KING BUT KING YESHUA, The Christ
In His name and by His power.
Reinhold

A response to this nonsense was necessary, especially since he tried to pass himself off as a Christian which he is not, nor was Adolf Hitler as the atheists try to claim as a club against Christianity. My anonymous minister friend, after reading this, emailed: “Unfortunately the man is troubled, confused and seeking to use the Bible to defend the indefensible!  I was surprised to see him place New Testaments scriptures in Deuteronomy but yet I shouldn’t be surprised, but recognize that God is not the author of confusion!”
Here is the response I sent to the Nazi:

Mr. Sommerstedt,
My father was a fighter pilot in WW 2 and brought back photos of the victims of Nazi torture which was so inhuman it made me sick. Plus, the Nazis were smiling as they made life miserable for their victims. Again I saw those photos, plus heard the stories personally from those who were so horribly treated by your people.
So please do not attempt to deceive me regarding history that I am totally familiar with. Plus, I was in Venezuela when this outrageous statement was given regarding torturing a human being ‘made a man’ out of you.
So I’ve done my homework, sir. Do not attempt to contradict me. And do not contact me again as your mail will automatically go to spam.
Rev. Austin Miles

To see the original story that prompted this outburst, click the link below:  http://www.newswithviews.com/Miles/austin107.htm
It is to be noted that many German soldiers who were captured proudly carried photos of the atrocities they had committed against American soldiers and many have been seen. One my father took from a Nazi showed a young American soldier screaming in agony after being hung upside down by his testicles and the Germans watching were laughing.
It is also to be noted that there are many former Nazis who have given their hearts to Jesus, turned their lives around and have become model Christians. THAT is the good news.
ANALYZING TODAY’S NEWS FOR TOMORROW’S HISTORY