Are you a Deplorable?  Trump overcoming Hillary despite Corrupt Media 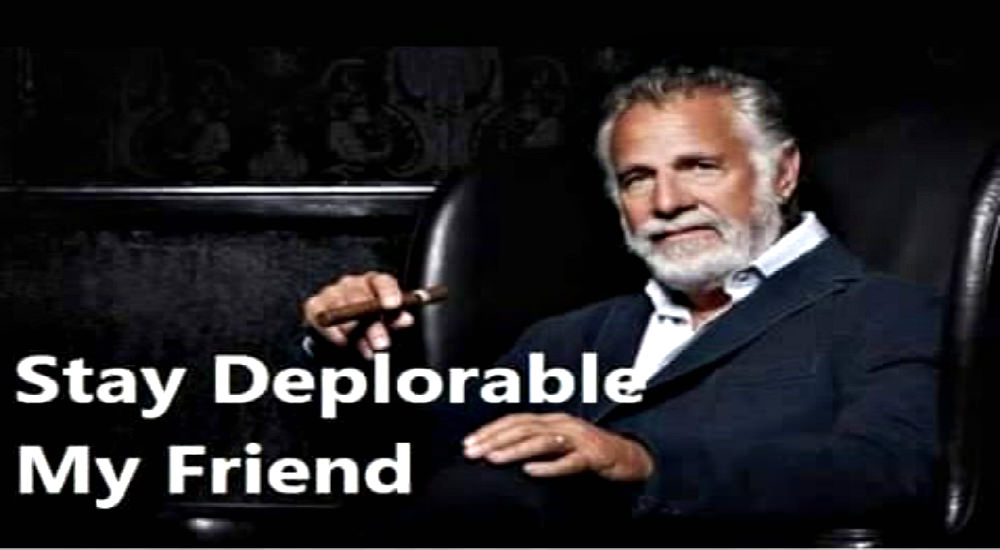 While Trump has been laying out a very presidential, very good sense plan for bringing back the American economy, rebuilding our military, putting down our foreign enemies, and helping the American people recover from eight years of Democrats stealing our wealth to make Washington, D.C. the richest region in the country, Hillary has been waging her own campaign to continue Obama’s policies that have brought America into decline, condemning the last eight years even while Obama is thanking himself for his eight years as a great economic recovery.  Comparing the two campaigns side-by-side is more proof that Trump is a man of substance while Hillary is a woman who lacks character and is so two-faced she must attack her opponent’s character.  Trump has been slandered and smeared by the media for being like the common man, unafraid to speak his mind unlike the polished speech of corrupt politicians, and they call him foolish and unstable.  Foolish, unstable people do not build billion dollar empires.

Hillary said half of Trump supporters are “deplorables.”  Wolf Blitzer asked her if it might be 10% or 20%.  Actually, according to her definition of what makes us the deplorables it’s more like 100% and I am proud to be among their leaders.  The public has no faith in the press because they’ve been exposed by Trump as being nothing but Democrats hacks – something that no other Republican has been able to do.

Public trust in the press has vanished

Some say the media failed to vet Trump.  Horsesh*t!  They went overboard overexposing him believing they could sink his campaign and it backfired!  The candidate they failed to vet was Barack Obama in 2008 and they admitted it!

Those same people say this is the worst pair ever to stand for president.  I say the worst pair was 2008, when the choice was a weak Republican who wanted to bend over for Democrats, and an America hating Democrat who wanted to bend over Republicans.  Now we have spent eight years under the boot of a racist Moslem socialist intent on bringing down America and, despite Rush Limbaugh’s heartfelt prayer hoping he failed, he has succeeded beyond his wildest dreams.  Now that Hillary’s corruption and Obama’s duplicity have been exposed they want to smear Trump as the one who is corrupt, greedy, and two-faced?

Obama’s policies have all been designed to weaken America’s economic engine, shrink her military, and empower foreign enemies.  This is all made evident by the Democrat who controlled Congress in 2008 nuking the economy and blaming Bush that helped get Obama elected.  B.O.’s agenda has been to open America’s borders while claiming he deports more because he has border patrols making records of telling people they must leave then letting them go.  They don’t show up for deportation court, and Obama even set up shelters for minors who came without their parents and then flew the parents in to join them!  He raised taxes through ObamaCare and other programs and then claims he cut them!  Corporations have exported jobs because of the high taxes and colossal deficits of Democrats while Obama imported cheap labor.  Worse, along with the cheap labor, he’s importing Moslems who want to impose Sharia on America, not to become Americans.  Honor killings and terrorist attacks have mushroomed under Obama.

Are you on Hillary’s list of deplorables?  If you answer yes to any of these questions then you are.

Do you object to government:

Obama and Hillary have assisted Islamists of ISIS and Al-Qaeda overthrow governments in the Middle East while saying they are waging war on them through drone strikes and bombings.  When Russia became active in Syria they destroyed more of ISIS in a week than Obama did in a year.  To make matters worse, Obama has cut back the military while expending ordinance so that even the Air Force is complaining they don’t have enough bombs.  This coincides with his efforts to keep bullets out of the hands of citizens during his first four years when the federal government bought billions of rounds of ammo.  What is the Obama agenda that Hillary wants to continue and expand?

We who support Trump know and that is what we find deplorable.  Just as in war where both sides use the same weapons to kill each other, in politics both sides use the same words against the other.  The purpose of the media is to wade through the propaganda to uncover the truth, but the Democrats have proven that their media is promoting propaganda to hide the truth.  Trump emerged from the crucible of this year’s primaries as the strongest Republican who will not work with Democrats toward furthering their agenda, but pushing back and undoing their agenda.  That is why we are NOT with her, but confident that he is with us!