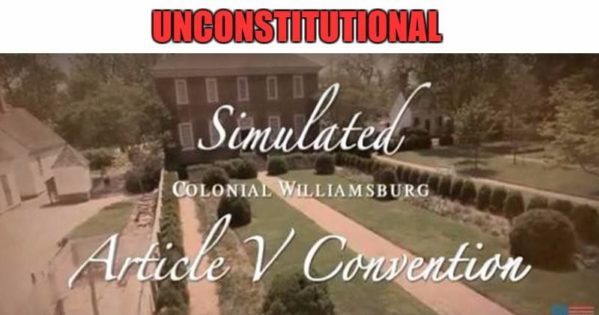 The Washington Peace Conference of 1861 was not a practice or dry run for an Article V Constitutional Convention as some in the Convention of States (COS) advocacy group claim.It was an interstate convention that acted as though it were a supra-constitutional entity that sought to propose amendments to the constitution to Congress though it had no constitutional authority to exist for that stated purpose.

Most of the Commissioners of the states who sent representatives, appointed by their home state legislatures, or state governor, expected incorrectly, that because of the dignified service they had provided in their home states, that the results of the conference would be seriously considered by both houses of Congress when approached by representatives of the conference.

Abraham Lincoln, who became president-elect on November 6, 1860, kept a low profile because of the hotly debated slavery issue nationally, until his inauguration on March 4, 1861. He stayed at the Willard’s Hotel on Pennsylvania Avenue in Washington, D.C., the same hotel where the Washington Peace Conference was held. Word could not but quickly reach the conference that Lincoln was there. Several representatives requested that Lincoln meet with them. He politely did so without publicly commenting on their efforts. He did, however, voice his opinion privately to his friend Orville Browning, who went on to become the 9th United States Secretary of the Interior in 1866, when he said, “no good results would come out of it.”

Another friend of Lincoln, Amos Tuck, who had been a member of the U.S. House of Representatives for New Hampshire’s 1st District, said of the conference, “[A] body unknown to the Constitution and the laws.” (1)

Attorney General Edwin Stanton worried the conference would try to impose “a provisional Govt. which was to take possession of the Capital and declare itself the nation” because of it’s attempt at the usurpation of constitutional authority.(2)

The intent of the conference was obvious when it submitted their “proposed amendment” to the Constitution to Congress as documented by a Wikipedia piece titled the “Peace Conference of 1861” where it reports, “The proposal was rejected in the Senate in a 28-7 vote and never came to a vote in the House.” This rejection by Congress is the reason why the meeting was sometimes called, “The abortive conference.”

Roger Baldwin, a convention Commissioner from Connecticut, rejected the convention’s proposed amendment to the Constitution. Instead he proposed that other States join with the legislature of Kentucky in their resolution asking other States to petition Congress for an open Article V Convention. (3)

Ohio objected to the propriety of the conference to formulate proposed amendments to the Constitution as there are one mode or the other for doing so in the Constitution. (4)

COS and its associate organization, the Koch brother’s American Legislative Exchange Council (ALEC), where the five amendments originated from, use a lot of bedazzlement to convince rank and file members of COS, legislatures, and the American pubic that what they are doing by raising up a rallying cry for a “convention of the states” is in the best interests of the country. But since comparisons are readily being made between the COS/ALEC Williamsburg simulated convention of 2016 and the Washington Peace Conference of 1861 we must reveal the most important comparison not intended to be known by anyone. As mentioned above with the Washington Peace Conference, the Williamsburg Convention is unrecognized by the Constitution for its purpose of coming forth with proposed amendments to the Constitution. Yet this “simulated” convention has come forth with 5 very real amendments that are being pushed to be included in any constitutional convention that is hoped for by the COS/ALEC alliance. Calling it “simulated” is part of its bedazzlement. Clearly the only legitimate means to attempt to amend the Constitution is through either of Article V’s two means. They are; Congress formulates an amendment and then submits it to the States, or; by application to Congress of 2/3 of the States to call a convention to propose amendments.

A constitution convention’s task, once convened, is to attempt to formulate proposed amendments to Constitution then to be submitted to the States for their consideration on whether to approve or reject them. Any generally worded suggestions in specifically worded “proposed amendments” attempted to be presented for consideration to or in an Article V Constitution Convention by the states, or from any other source, usurps the originating, formulating, and proposing purposes of a Convention.

ALEC is a Super PAC on steroids. With full oversight of this Williamsburg “simulated” convention by COS/ALEC and their many monied interests (7), and secrecy (8), an independent, unmanipulated outcome can hardly be expected. It is highly suspected that the convention masters, David and Charles Koch used their endless financial and other resources, used the Delphi Method, originally developed by the Rand Corporation in the 1950s, to manipulate the opinions of convention attendees by scientifically designed questions to lead them to a predetermined “consensus,” (in this case the five amendments). A series of questions are used as necessary to lead nonconforming opinions to the “consensus” view. It is never revealed what the opinions of other attendees are, or what the number of “consensus” views are until the desired outcome. this leads investigators to further suspect that the series of “consensus results” are manipulated to have, so far, non-conforming attendees alter their opinion to what is presented as a“consensus result.”

To further control the Williamsburg Convention process, COS insisted that’s its predetermined convention rules be adhered to. This goes in stark contrast to our first constitutional convention in 1787 which set its own rules.

Say no to an Article V Convention of States.

(3) Report of the debates and proceedings in the secret session of the conference convention,: for proposing amendments to the Constitution of the United States, held at Washington, D.C., in February, A.D. 1861 pgs. 45-47

(6) ALEC gets 98% of it funding from corporate interests but writes model legislation for member legislators to push in their states.

(7) In ALEC’s underworld, democracy is a burden