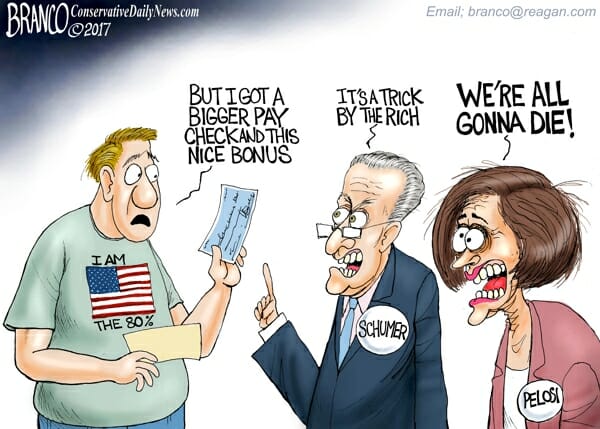 People who claim to be the staunchest of conservatives who say that, despite all the conservative agenda that Trump is fearlessly promoting, they would rather have liberal Democrats be in charge than be indebted to Trump.  This is not principled.  It is stabbing Americans in the back!  They are not prophets, but wolves in sheep’s clothing.  Leftists and their infiltrators of the Right use these techniques to subvert and mislead people:

President Trump is proving to be every bit as dedicated and devoted to the Christian conservative principles of Reaganism for which the TEA Party has been begging the Republican Party to actually do for the past eight years.  Obama proved to be utterly false in everything he said he would do for America.  Instead all that he did to America was for the benefit of the world’s leftists.  Now that Donald Trump is correcting the error there are those who claim to be the epitome of conservatism who are speaking against him.  These pundits, too, are as false as any Democrat, so much so that it can be surmised that they, too, are wolves in sheep’s clothing.  Like RINOs they only take the name conservative Republican while acting on behalf of Democrats through subterfuge and misdirection.

The fruits of people are not known by their friends or the company they keep as Obama claimed, for good people can be misled to keep company with the wicked, and wicked people can keep their nature hidden in order to deceive others.  The fruits of which Jesus spoke are what these people produce which is clear and identifiable.  Obama and the socialist Democrats produced an American economy in decline, a military that is weak, a border open to invasion, and a Washington establishment of corruption that sucked up the wealth of the nation just like Hugo Chavez did to Venezuela.  President Trump is producing an America that is getting stronger by the day and an economy by which people can grow and become prosperous once again.  Obama’s new normal is being cast into the fire to be added to the ash heap of history where losers reside, and Obama is finding himself and his wicked agenda truly on the wrong side of history.

Conceit and insecurity of NeverTrumpers

Democrats the party of hate

All of this is encompassed by the Left’s global warming socialist democracy meme.  They set out to separate fools from their money by telling them lies.  They appeal to greed and envy telling them they are not to blame for the circumstances they create for themselves and encourage them to steal as a form of charity.  And they tell them that if they don’t then they are going to die!  They say this is what Trump is doing, except that he is the one using rational arguments to promote Americanism by dispensing with the left’s agenda while all they can do is spew hate.

·        Trump colluded with Russia to steal the election

Nowhere is there any Democrat path to prosperity, only to subjugation to government.  Nowhere do they elucidate any criticism of Trump’s agenda, only an irrational hatred of Trump.  Nowhere do they propose making America stronger or better, while Trump put out a road map on exactly how he will make America great again.  Trump offers rational solutions while Democrats offer irrational hate.

The Left is everything negative in life living with glasses half empty, blaming others for their own failings, and their deceivers taking credit for the success of others.  Their ideology is based on rejection of the Judeo-Christian values that made America great by making God the oppressor and Satan the liberator.  The Left always appeals to the selfish, the greedy, the criminal, and the tyrannical.  To the Left, American Exceptionalism is not American liberty and self-governance, but America giving away its wealth by submitting to the world.  Leftists don’t want their world overshadowed by American leadership.  What they want is to profit through stealing from America by hook or by crook.  Leftists importation of cheap labor and Islamists needs to be halted and reversed!  Islamic colonization of Europe and America are destroying cultures, subverting the locals, and conquering foolish people without a fight.  The GOP has submitted to Democrat media propaganda political correctness and has desperately needed a leader to pull them back up on their feet to take a stand.  Not to reach across the aisle and work with the democratic socialists who are trying to unmake America, but to lead the way to re-establish America as it was founded.  The only motion they should make across the aisle to Democrats is beckoning them to come back to the light.  All leftists offer is greed and corruption and that’s why they always dogpile on the greatest, wealthiest nations.  Since Reagan America has needed a great and powerful man who stood up for the righteous principles of republicanism and we have found just such a man.  A man who will not shrink when attacked by the leftwing media, but will stand up and fight back with every tool at his disposal.  America needs a man who will fearlessly speak the truth and defend righteousness with conviction and determination to push back the darkness.

President Donald J. Trump is the fighter that America needs!

This is how the Left promotes fake news to subvert the truth.  This is why Democrats have launched their new morality campaign to classify even accidental touching as rape.  It’s all meant to cover up their importing Moslem rape gangs to subjugate people who are starting to recognize that socialism is tyranny;

How leftists promote fake news by calling the truth fake

The Left has brought America down in decline, made more people dependent on Democrats, and subverted the minds of the young.  Trump will either be the catalyst that launches a new American resolve to beat back the dark, or the last hurrah of a failing people.  Leftist corruption runs deep through American culture in education, entertainment, and media propaganda.  If the young cannot be brought back from the brink, if they cannot be taught to recognize lies, if they cannot learn how to live a morally righteous life, then America will go the way of the Roman Empire and outsiders will tear her apart to feed off her carcass.