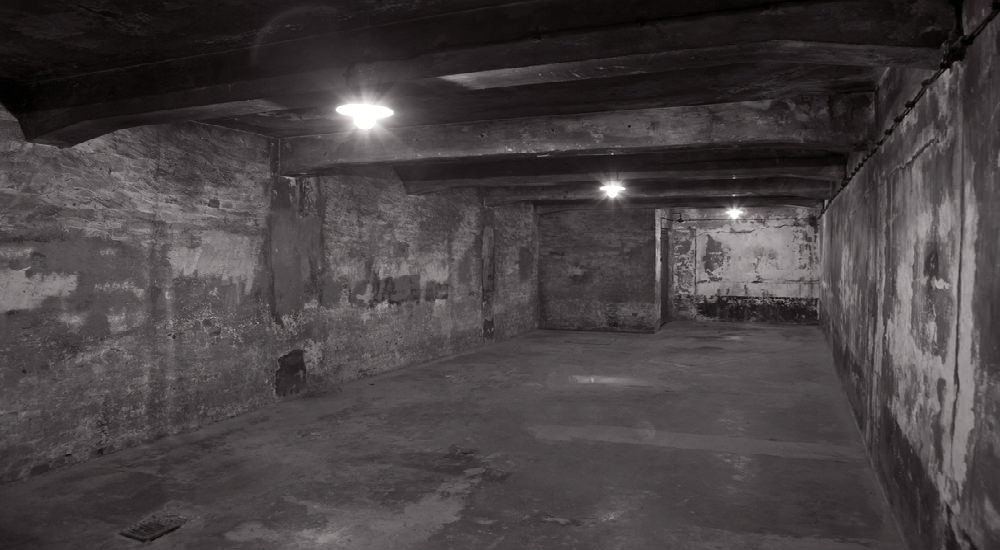 What will follow gun control? Of course, there are FEMA camps and privatized prisons awaiting Patriots and Constitutionalists and family members. But how many Americans are aware of the New World Order underground gas chambers in America?

These, too, are part of the overall Soros agenda for population control. Not enough are the Soros-funded programs for abortion, euthanasia, homosexuality and samesex to bring population down to 2.5 billion from the current 7 billion.

Add to this the underground gas chambers in Oregon, calibrated to exterminate 84,000 Patriots and Constitutionalists and their families per day.

And when 2.5 billion or less world population is attained, the cashless Beast computer system underground in Brussels, Belgium, is then activated. It is only configured for 2.5 billion accounts and no more. This is based on Club of Rome secular findings which state the earth can only sustain 2.5 billion human inhabitants.

However, with the Georgia Guide Stones we see the Luciferian ideal of 500 million for global population. (Could Guide Stones give us the G.S. Acronym for pop.-controlling George Soros?) But let us go beyond such speculations and consider the proven facts:

The following confirmed information deals with the genocide mechanisms now in place to follow gun control! Christian veteran trenching professional, one of the best on the West Coast, is Phil, a most excellent and courageous Christian, whose father was a dedicated missionary. A personal friend with an impeccable character, Phil, veteran trenching professional in Oregon, was called upon when he observed the following:

In Oregon, there are now two underground gas chambers built by the Rockford Corporation – under a never publicized “joint venture” – for 1 billion dollars! The first underground gas chamber is located by traveling to Mist, Oregon, to Junction Hwy 202 & 47, then travel northwest 11 1/2 miles, then 1.3 miles west on Hwy 202 to a private driveway turning back into the trees, to a ten or twelve foot fence with security guard.

In plain clothes at the gate, Phil recorded, the security guard wears dark trousers, a white shirt, and is armed with a fully (not semi) automatic weapon. Once inside the fence, the security guard stops once every thirty seconds – while conducting a worker to the gas chambers – for a security check. The compound has 150 armed guards with fully automatic weapons. These guards are pledged to strict silence and wear “triangle” arm patches.

Vehicles nearby are dark blue, almost black, with Connecticut and New Jersey license plates. This installation has “6 or 7 underground buildings, plus a huge chamber!” This structure is “120×140 or 150 and 40 or 60 feet deep underground.” Just to the very west of this gas chamber is where some of the richest natural gas wells in the U.S. are located.

This “huge building” is the first tie-in and tap to these gas wells, reveals Phil, a seasoned professional who has seen absolutely no “tie-in” there for twenty years. An ominous duplicate facility is hidden at Goat Mountain, Oregon.

Both facilities are 50 miles equidistant from Portland. A maximum 85,000 people per day can be murdered in these underground facilities. (To become the mist at Mist, Oregon. This is typical of globalist dark humor. Underground near Fairbanks, Alaska, are the “fair banks” where much of their wealth is stored, a Rothschild agent revealed to a bed-and-breakfast owner near Fairbanks.)

From the air, Phil noted, because of dense tree covering over the Mist underground gas chamber, “You have to be looking with something very elaborate. They were so careful with how they worked with ground restoration, it’s bizarre. Right down to the last blade of grass.”

The engineer continues, “There is a 24-inch underground gas pipe with webbing systems inside and another 8-inch specialized fiber-optic cable conduit riding on runner things in the center of it. Setting on cradles, the 8-inch is a coated system you can’t even pick up with electronics: It just hides itself inside the gas line. When they start back-filling the trench this gas line is in, there is a 12-inch on top of it. The Rockford Corporation says it’s almost impossible to detect.

Pivoting off of Portland, a six-lane road in a 50-mile “parameter circle” was put in by Asian countries for maximum secrecy. The Japanese and Chinese “inserted money into this ‘golden circle’ for military movement.” The Asian work gangs for this six-lane road could not speak English for maximum secrecy. The gas and communication lines – from Mist – loop the Salem area and back up into the Goat Mountain facility.

Many communist books are written on the topic of Regionalism. Should globalism succeed in reducing America to one more colony, as stated in Foreign Affairs Magazine, America will be divided into four major regions. The Western Region of America is slated for the communist Chinese, whose coldly barbaric disregard for life is well known.

The Goat Mountain underground gas chamber has black unmarked helicopters flying in after 10:30 pm Pacific time every night. Its landing area contains infrared landing lights. Goat Mountain is not on many U.S. maps. Thirty white-painted UN buses have been photographed just outside the Goat Mountain facility. It is reported a deeply-underground Oregon state militia have formed “elite commando units” and are watching the gas chambers closely. A former U.S. Army military intelligence officer with the Oregon militia reports, “Many of the Oregon National Guard are sold out to the NWO and cannot be trusted.”

Skeptics and professional propagandists may respond, “A truly paranoid post, believing that if a gas pipeline and compressor company puts an underground compressor in it must be a gas chamber 40-60 feet deep designed to kill 85,000 loyal patriots a day.”

To which Phil, veteran engineer and lifetime resident of Oregon answers, “A joint venture of one billion dollars and 150 armed guards pledged to silence with fully (not semi) automatic weapons, is not for a mere underground compressor.”

Why would the NWO put the chamber underground? Because it is easier to pre-position when more secluded. Secrecy is the major concern and overrides the details for the disposal of bodies.

The Rockford Corp has some operations in Phoenix.. They discontinued the Beach Grove operation because too many people found out about their intent .. GOAT MOUNTAIN would fit in with the Satanic Gov of Reptilian CONSTRUCTS OF BLACK OPS CORPS as strange as that appears.

One astute observer comments: “The Rockford Corporation is a major Illuminati controlled corporation. It reports directly to Star Wars City in Colorado Springs, headquarters of the U.S. Space Counter Intelligence Command. Star Wars City, in turn, reports directly to the President whose two wings, MAJI, previously reported upon, and the NRO, (National Reconnaissance Organization) maintain deep involvements with all aspects of Alien Life Form (ALF) issues, both on and off planet. The actual headquarters are located underground within Cheyenne Mountain. If the information concerning this facility is accurate (and it is) Rockford would certainly be a major black-budget player, and its name therefore adds credibility to the text.

“Goat Mountain continues to be the subject of ongoing reports concerning unusual aerial and ground activity. The name, Goat Mountain, is highly correlative to Illuminati symbolism as well as the triangular patches worn by security forces, and therefore requires some elaboration.

“The Goat represents the satanic pentagram, which during ritual is used to draw in other dimensional demonic entities. The pentagram is also known as the Goat of Mendes, or Baphomet. The goat head also relates to the Sirius star system, home of the reptilian culture, and massive temples built in the past purposely pointed directly towards this star system. In essence, the symbolism relates to bringing down Satan enabling rule over the kingdom of Earth.

“The triangular patches, evidently viewed by whistle blowers on the arms of military personnel, are telling. The triangle represents a key symbol to the Illuminati and signifies their power and dominion over the masses. Like the pyramid on the one dollar bill, with the all seeing eye, the Illuminati view themselves, rightly so at this point, at the pinnacle, with their authority and span of control over the masses widening through to the base. The triangle is also synonymous with mountain, an important consideration when deciphering Illuminati double speak.

“Triangular patches worn by certain military personnel have been integrated within other reports, through presumed whistle blowers and abductees, and always in highly secure and remote locations. S-4, Montauk, and Dulce, are three major joint alien/NWO enclaves in which these patches have been identified-among others worldwide. The patch, according to several sources, are only worn by Delta Force/NRO personnel. These individuals have been bred through Montauk mind control centers from a very early age, and for those that survive, become the workhorses of the NWO. Their assignments, including UFO crash retrievals and the security of super secret bases, would clearly fit in with the text concerning the Goat Mountain facility.

“The black helicopters referred to above, and the subject of many other scenarios such as animal mutilations, are built by Teledyne Ryan Aeronautical, Inc. This is also a major Illuminist corporate entity. This company appears on the U.S. Space Counter Intelli-gence Head Quarters organizational chart, with reporting relationships to Boeing, and other aerospace producers, such as McDonell, Ford, and Lockheed. Again, as was the case with Rockford, the ultimate reporting relationship is with Star Wars City, in Colorado Springs, and from there to the President, MAJI, and NRO.

“Unmarked black helicopters continue to be associated with super secret activities. Therefore, sightings at Goat Mountain would be the norm. According to the sourced material I have read, and identified below, the unique operational characteristics of the helicopters coincide with many civilian observational reports, albeit, misidentified in many cases. Here is why:

“The helicopters, (XH-75D type) utilize a Gravitational Electromagnetic Projector. This allows the craft to create a 360 degree photonic force field around its perimeter, stretching out about 50 feet. By altering gravitational responses, the vibrational frequencies around the craft become disturbed, resulting in a pulstating, colored arc, rendering invisibility, and often misidentified as a UFO. In essence, the helicopter has changed reality, so to speak, adding confusion to its makeup and affording the craft, according to the source, of up to 82% higher protection against any attack. The crew compliment is seven, along with two (2) RPV’s and (1) HALE drone. (These two devices are remote-controlled probes devised to relay back information.)”