Will President Trump Accept a Globalist Threat to America and Israel? 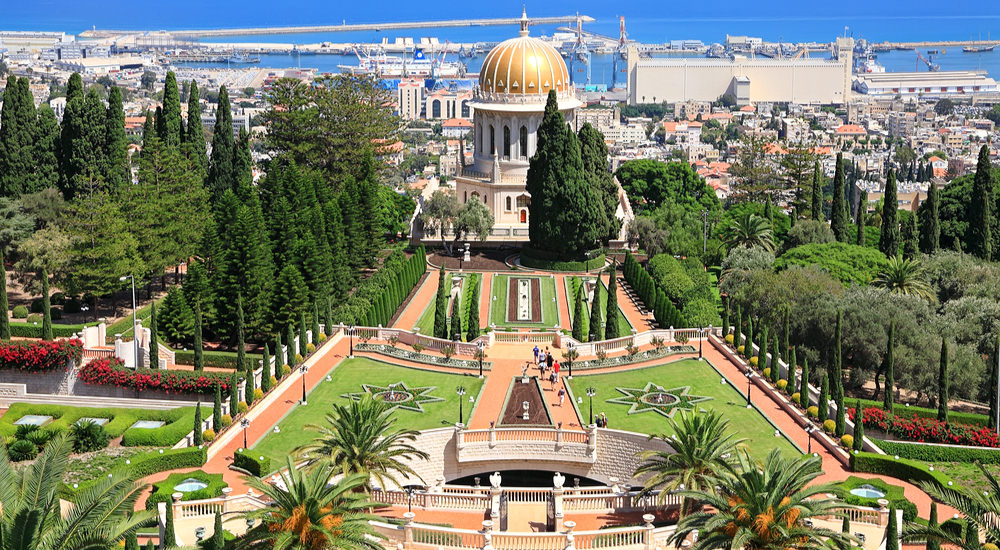 Will appeasing President Trump, to maximize his support of nationalist Israel, include the dismantling of Baha’i in Haifa? The Haifa Baha’i intends to serve as the FINAL GOVERNING AUTHORITY FOR ALL THE NATIONS OF THE WORLD. Its dismantling by Israel will show President Trump that Israel fully supports “Americanism not Globalism.” Will Israel show the resolve to do this, to maximize benefits and support from President Trump and America?

But such a goodwill gesture will maximize indigenous benefits to Israel even more!  Because the Baha’i World Faith headquarters reportedly sits on one of Israel’s richest oil deposits!*

The Jerusalem Post article “Bahai Get Go-Ahead” (Jerusalem Post 9/29/89) reveals their plans have been in place for decades, “The Haifa city council this week approved the plan for a $150 million building project by the Bahai World Centre on Mount Carmel. The project will be financed by Bahai adherents throughout the world and will include a huge ‘fairy tale’ garden stretching down the slopes of the mountain and three large buildings. The project was approved earlier by the local planning commission in a single week, following a Jerusalem Post report that it had been bogged down in bureaucracy for over 18 months, though it will provide hundreds of jobs through 1999.”

What a betrayal of the Israeli economy this turned out to be!

The globalist Baha’i World Faith has had its headquarters on Mt. Carmel in Haifa, Israel, since 1949. In America the center for the Baha’i is in Wilmette, Illinois, where Obama and Rahm Emanuel strode past many times. (Obama accepted the Baha’i ring stone at the White House: See Photo.) The $3 million temple draws over 100,000 visitors a year according to their spokesperson. Additional temples are located in Frankfurt, Germany; Kampala, Uganda; and Sidney, Australia. Though each is different, they are all nine-sided (Nine has religious significance to Baha’is) and each is covered with a dome.

As far back as the 1950s, the wealthy and patriotic counterpart to Donald Trump, Emmett Culligan, warned of world government associations and intentions of the Baha’i Temple in Illinois.

Convinced they have a message the entire world should hear, Baha’is have a strong “missionary” emphasis. They are active in more than 250 countries. Though global missionary work has been limited to the 20th century, total membership is over 5 million. The 1960s and 1970s witnessed very strong growth, especially in the U.S. with a special emphasis in California. California membership constitutes over 25% of the membership of Baha’i.

The Baha’is have three levels of administration. A minimum of nine believers constitutes a local spiritual assembly, which elects a nine-member administrative body each year. These centers have no clergy or house of worship. They employ “teachers” who give “Firesides” or discussion groups in homes or Baha’i centers. The second level of Baha’i is the National Spiritual Assembly of nine members elected each year by the delegates to the cult’s national conventions.

WARNING! The very top level is the UNIVERSAL HOUSE OF JUSTICE, another nine-member body elected every five years by the national spiritual assemblies throughout the world. Though the UNIVERSAL HOUSE OF JUSTICE serves currently as the governing body for a “world religion” – similar to world government-supporting Freemasonry and Interfaith – its ultimate intention is to serve as the FINAL GOVERNING AUTHORITY FOR ALL THE NATIONS OF THE WORLD. Baha’i is a major player in the Trump-opposed New World Order and globalist one-world government.

The Bahai World Faith headquarters reportedly sits on one of Israel’s richest oil deposits (like the Al-Aqsa Mosque sits over the Temple). What a poor tradeoff to Israel’s economy, was Bahai’s anemic promise of hundreds of building jobs through 1999, ultimately culminating to sit on such a rich oil reserve. By following the lead of President Trump and proclaiming “Israelism not Globalism,” to dismantle the world-govt. Bahai headquarters in favor of activating one of its richest oil deposits, will Make Nationalist Israel Great Again!

One can only recall the words of nationalist Prime Minister Menachem Begin to meddling globalist Kissinger, “You are not the first Jew who thought he was doing right for Israel when he was not!”

Vigileaks knew personally Lyle Harron, President of NOEL (Netanya Oil Exploration Limited) who was a professional colleague and personal friend of Andy SoRelle, whose Atlit II at 20,570 feet  struck oil! What oil experts call “very good shows” came to the surface; graded as light oil at 35 to 40 degrees API. SoRelle continued to a final depth of 21,431 feet. The zone of oil bearing rock, was estimated at 470 feet, from 20,570 to 21,309 feet.  This was in 1982.  In 1989 the Baha’i building project began and Harron said it was built directly over the oil site.