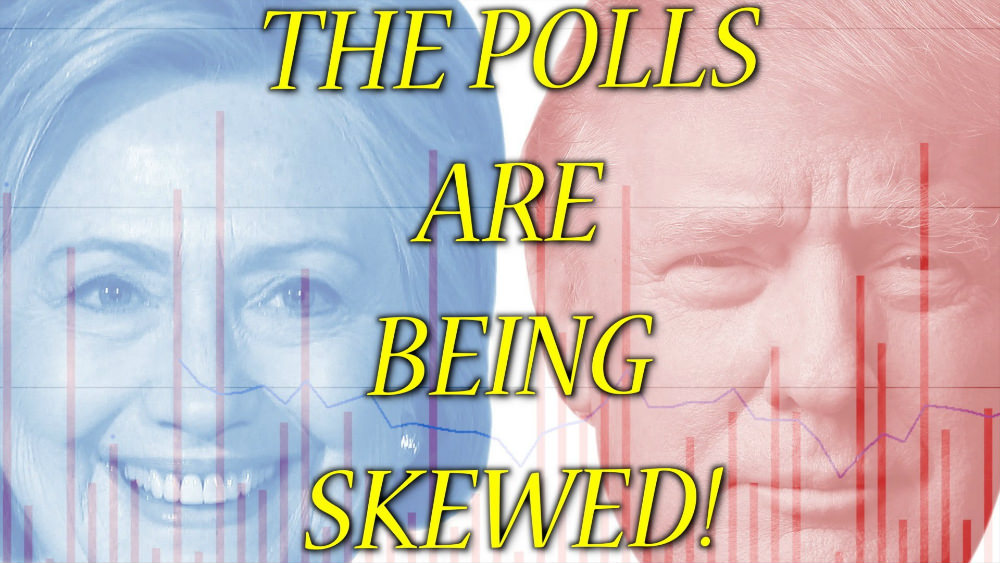 As we approach Election Day, there will be an incredible amount of talk about the polls. Mainstream media pundits will expound on the lead that Hillary Clinton has and how it is something that, in the short time left, can’t be overcome by Donald Trump. But is this “lead” that Hillary Clinton is said to possess an accurate reflection of the electorate?

Emails released by WikiLeaks last week prove that the Clinton team applied an enormous amount of pressure (as if it were needed) on the mainstream media into systematically and deliberately over-sampling Clinton-friendly demographics in their polling. The emails, that originated with Clinton campaign chairman John Podesta, included a detailed 37-page manual on how to go about most effectively skewing the polling results so as to give the Clinton campaign the numbers they needed to claim a lead.

It was their game plan all along to propagandize huge leads in the polls – through the Clinton-friendly mainstream media – to depress voter turnout for Donald Trump. A simple reading of Podesta’s email and the attached manual prove this beyond any doubt.

This is the inherent danger in a politically corrupt; a politically biased mainstream media. By creating “scientific polls” that, through the use of oversampling, skew the perception of a candidate’s popularity, they are manipulating the masses into thinking there is no reason to show up at the polls. To date, or at least until WikiLeaks exposed the scheme, the Clinton team strategy was working.

This scheme of the Clinton campaign to propagandize the polling data just before Election Day, quite successful until it was exposed, is exactly what Donald Trump and his surrogates are talking about when they make the argument that “the system is rigged.”

A perfect example of one of the more obvious sampling biases comes in the form of a recent ABC/Washington Post poll that gave Hillary Clinton a 12-point lead nationally over Donald Trump. As with recent polls from Reuters and ABC News, this ABC/Post poll included a 9-point sampling bias toward registered Democrats.

This was something that they didn’t even try to hide. In publishing its methodology ABC News stated that it sampled 874 likely voters and that the poll had a margin of error or 3.5 points. They openly admitted that the, “Partisan divisions are 36-27-31 percent: Democrats – Republicans – Independents.” While Democrats may have a very slight voter registration advantage, it is nowhere near the 9 points used in this poll.

Professional pollsters insist they are using models established during previous voting cycles, most notably the 2008 and 2012 General Election cycles. These cycles produced an above normal Democrat/Progressive voter turnout for the “historical” advent of the “first Black president.” These were anomalistic cycles not representative of the state of the electorate today.

One Podesta email, WikiLeaked earlier last week, spells out – in detail – exactly how to “manufacture” the desired polling data of the Clinton team. It serves as proof that the mainstream media is manufacturing Clinton-friendly polling data to depress voter turnout for Donald Trump.

The email begins with a request for recommendations from Clinton campaign staff on how what to execute “oversamples for polling” in order to “maximize what we get out of our media polling.”

“I also want to get your Atlas folks to recommend oversamples for our polling before we start in February. By market, regions, etc.” Podesta writes. “I want to get this all compiled into one set of recommendations so we can maximize what we get out of our media polling.”

As stated, the email included a 37-page guide – a manual – with recommendations for rigging the polling. In Arizona, for example, it specifically tasked those organizations executing the polls with oversampling Hispanics and Native Americans, saying it was “highly recommended.”

In discussing Florida, the report mandates “consistently monitoring” samples to makes sure they don’t include too many seniors and that they included an oversampling of “African American and Hispanic voters.” It also instructed pollsters to oversample Clinton-friendly Independent voters in the Tampa Area

This is why, when we listen to any of the news outlets – including a Right-leaning FOX News – we are hearing the chattering class of the political punditry; the “strategists” and “analysists” parroting each other in saying that the polls show Trump losing. They are either complicit in the propaganda scheme or simply too stupid to understand they are being manipulated.

Whichever the case, it is clear that the Clinton team is – not now, nor ever – playing a corrupt political scheme that includes the misinforming of the American people in order to manipulate them in their right to a free and fair election. The evidence is irrefutable.

With FBI Director James Comey’s reopening of FBI investigation into Hillary Clinton’s unauthorized and illegal private email server, we should see a significant jarring of the polls to Trump’s favor. A new ABC/Washington Post poll indicated that 30 percent of those polled said the reopening of the investigation would keep them from voting for Hillary Clinton on November 8th. Even if the poll sampling remains oversampled there should be a dramatic drop in support for Hillary Clinton given this poll.

And so we will find out just how dishonest the mainstream media is in the polling. If we do not see a significant drop in support for Hillary Clinton then, my friends, Donald Trump is spot on correct in saying the system is rigged. At that point We the People have some serious question to answer and they all have to do with the fate of the country.

This Week’s Anti-Israel Attacks Wouldn’t Have Happened Under Trump
May 14th, 2021 Flag And Cross

Did Cancel Culture Boomerang, Hitting A Hollywood Elitist In The Wallet Or Nah?
May 14th, 2021 Clash Daily

This Woke US Army Ad Will Make Your Blood Boil (Video)
May 14th, 2021 Conservative Firing Line