It is always surprising when the Democrats pull off another year of major election fraud and the American people don’t burn the place down as the French do in response. Promising free stuff to the ever gullible is great insurance. The “ever gullible” are those with college degrees after 1992.

The 2018 midterms were a train wreck of voter fraud, stolen elections and customary malfeasance from Democrats. No wonder they fought tooth and nail in early 2017 pressing President Trump to disband his commission investigating vote fraud. Since the dust settled and Republicans lost 40 seats in the House, we can pick over the bones and see how this happened.

California is an example of spectacular fraud this year. Republicans lost seven of 14 seats in California after the election was over, as “harvested” ballots poured in after the polls closed. “Harvested?”

“Ballot harvesting” is a powerful practice for Democrats and why the left-leaning Wikipedia does not have an entry on this subject. Such is the dark side of liberal politics.

Ballot harvesting is defined as the practice of party organization people knocking on doors to get mail-in ballots that were not mailed on time. How party operatives know where these ballots are to be found is a mystery for which there is a simple explanation.

Ballot harvesting presents many opportunities for election fraud and has been made illegal in 19 states. Most recently, Arizona Governor Doug Ducey signed a law making the practice a felony in 2018. “Felony” means a year in state prison and financial ruin from which few ever recover. Get a job? “Were you ever convicted of a felony?”

Engaging in ballot harvesting in Arizona can now earn you not only a year in prison but a $150,000 fine while in California, it is legal and the new method of stealing elections from Republicans! They are stomping out Republicans like doing a Mexican hat dance, but with real Mexicans.

Orange County, California was a total wipeout in 2018, where Democrats “harvested” 250,000 ballots in the 2018 election. A county that produced two Republican presidents in the 20th century turned blue through ballot harvesting, with three established conservative Republicans losing in spite of leading in the first round of ballot counting. Suddenly, ballot harvesters showed up with bushels of all-Democrat ballots from the trunks of their cars!

A conservative homeowner in Orange County captured a “ballot harvester” in action on her doorbell camera, in a viral video now appearing on YouTube.

The lady “harvester” identified herself as working under a new state law to provide a service to deliver ballots for counting, “but only for people who support the Democratic Party,” said she unwittingly to a recording camera. In the next state, she would be looking at a one-year prison term.

Democrat operatives are traveling door to door picking up ballots selectively from Democrats on voter rolls while ignoring any home with a registered Republican in it.

In Broward County, Florida many citizens posted videos showing election workers breaking the chain of custody on ballots which challenges the integrity of those ballots. There were many incidents where the integrity of ballots has been challenged in Florida as it is suspected Democrat election workers swapped boxes of real ballots with fake Democrat ballots in Florida counting locations as ballots are hand-transferred from polling places to counting facilities.

Democrats in California managed to include 250,000 ballots this year with no chain of custody! In a state that already “mistakenly” registers illegal aliens to vote “accidentally,” California is now going the extra mile to make sure it freezes Republicans completely out of office and they are doing it!

Between Clinton style corruption for money and power, the determination of DC bureaucrats to put more Democrats in office as they love bureau building and any program that will spend taxpayer, and now, the next two or three generation’s money can we be sure that we can stay on history dark calendar that, “No great empire lasts more than 250 years. We are now 242. 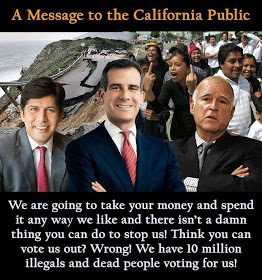