More Violence from the Religion of Peace 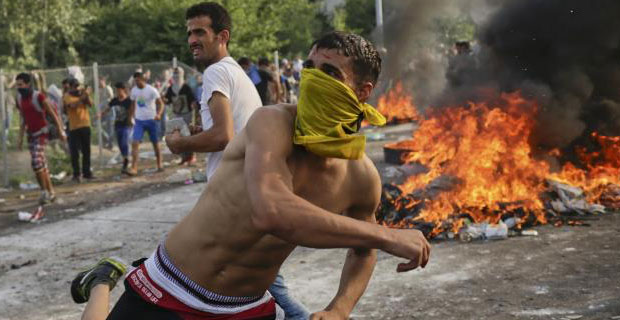 The riots over a depiction of a Muslim prophet stems not from some “insensitive” issue regarding proper protocol or “radicals” outside the mainstream.  The riots are the result of vast members of the human race surrendering their minds to the fallacy of faith.  The rioting Muslims are acting like the Nazi brown shirts spewing nihilism, vehemence and hate at the direction of leaders who have ingrained them with the idea that that they don’t have to think about what they are told . They simply have to obey and express outrage.

This is the result of accepting the tenet of faith.  Just believe and all will be taken care of.  Just believe and you will be rewarded.  Just don’t ask questions about what has been pronounced your duty and be one of the mob .  Declare that as your loyalty oath and all else is unimportant.  Your inquiring mind?  Ignore it.  You wonder at the chaos and destruction?  It is the way of the world. Do not question the mandates of those who are your informers of how to think.  Thinking is not your prerogative.  It is enough to just believe.

This substitution for the actual acquisition of knowledge explains both the mindless rioting and the mindless response.  Both cultures the Middle East and the West are hiding behind and paying homage to this demand that has plagued centuries of men with the issue that only can lead to conflict.  When faith is supreme in a culture you see the spectacle of the leader who spouts the “truth” of predominate beliefs and gains power by the masses who want these tenets enforced.  This you see in the dictates of the Mullahs and in the apologies of the West.  The apologists bend over backward to evade the knowledge that their pandering to faith has anything to do with their inability to stand up and face evil down.  A limited war, a sacrifice of American lives for the enemies democratic right to vote, the inability to express outrage at the viciousness of our enemies all comes from a compassion that is inappropriate but a direct derivative of a reliance on faith. A leader who panders and practices faith has no way to denounce those who are also faith practitioners as he knows they, like him, are relying on the same method of thinking.  He can only point to the superiority of his beliefs which results in the confrontation that must eventually result.  Two viewpoints  derived form this method cannot be superior at the same time.

It is the method of thinking called reason that is the answer to all problems.  It is the method that requires one to look at a situation and gather the facts, determine the best course of action based on the best of one’s knowledge and to proceed accordingly.  For instance, one cannot conclude the Muslim religion is a peaceful religion if you see the rioting and beheading in the name of religious superiority.  You cannot use compassion as an excuse for letting American soldiers die in the nonsensical door to door battles that could have been avoided by an aggressive devastation campaign that gave no quarter.  Only a faith that there are multitudes of innocents that we must die for can sustain such foolish tactics.

It should not be too difficult to see that the enemy we are facing is relying on faith and consistently  emotionally and outrageously spreading throughout Europe.  It is equally not difficult to see that we are enabling an Islamic country in Iraq.  There is no secular movement in the electoral process.  We are relying of faith that somehow the country of Iraq will become a tolerant nation that will be free and allow freedom of speech and the depiction of cartoons…yeh right.

So how could reason resolve this mess.  First of all we could recognize that the fundamental difference between the West and the Middle East is the recognition of individual rights.  We could recognize that individual rights are not an article of faith but the derivation of reason by men who saw that giving faith full reign simply opened the door to religious persecution and dictates by the religious majority or the most ruthless minority. We could look at the rationale behind “compassionate” political platforms and how they ignore a more important priority i. e. justice. The choice is very clear.  Either we reinstitute a repeat of the Crusades, allow Muslim dictates to spread or intellectually wake up and look to reason as the dominant means to knowledge and therefore action.  That would require the immediate announcement that the seat of this Muslim uprising. Iran. would be attacked and defeated.  A constitutional government would be instituted by decree and individual rights would be the central theme of the law of the land. Religion and faith would not be allowed to get a toehold in the government.  This would not be cramming beliefs down anyones throat.  This would allow people to have and express beliefs.  And we would not flinch from telling Tehran that they were the next Hiroshima if they did not change their ways and forget about attacking individual rights and Western values. We would show those barbaric mobs that the furor we could unleash would make their threats and paltry stone throwing look like a third grade recess. The trend is so openly clear that action cannot be postponed  pondered and ignored.  The next uprising will be worse and until the issue is faced and the proper action taken life will be far different for those who will follow.  The Greatest Generation left us a legacy and a model that said, “ We will settle for nothing less than total victory”.  There was no legacy of “compassion”, retreat, compromise, diplomacy and timidity.  This should not be what brought us down. To believe otherwise is a blind hope that the enemy will voluntarily change.