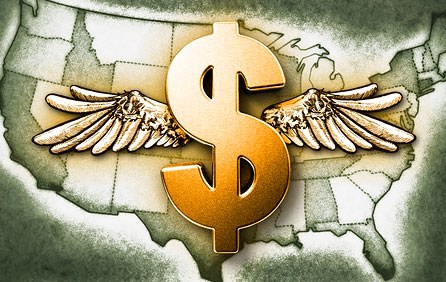 The official underreporting of the unemployment statistics is a well-known fact. The cavalier dismissal of the systemic dismantling of the market economy by the Obama administration is undeniable. Notwithstanding, the lack of living wage jobs is not simply a partisan issue. Ever since the adoption of the globalist free trade betrayal, the national suicide of the free enterprise economy has continued. Transiting skilled employees into government dependents is an overt component of the “New Age” of reduced wealth and servitude for the ordinary American.

Consider the logic of the consequences of off shoring our manufacturing base. Once the jobs are gone, the prospects for good paying substitution jobs become rare. Without the ability to sell value added products generated from meaningful margins, affording generous pay scales of a prosperous middle class is impossible.

The notion of an upwardly mobile replacement job economy is an absurd concept, when government employment becomes the priority paycheck. Case in point is the realities of hiring ICE officials and TSA thugs. As long as a federal policy of open borders and fake security threats exist, hiring government parasites will be the norm.

Even if you reject this kind of argument, examine the nature and pay levels of jobs in the private sector. When the New York Times admits the obvious, in Majority of New Jobs Pay Low Wages, Study Finds, you know the cover-up is unraveling.

“While a majority of jobs lost during the downturn were in the middle range of wages, a majority of those added during the recovery have been low paying, according to a new report from the National Employment Law Project.

“The overarching message here is we don’t just have a jobs deficit; we have a ‘good jobs’ deficit,” said Annette Bernhardt, the report’s author and a policy co-director at the National Employment Law Project, a liberal research and advocacy group.”

Characterizing the current economy as, in a recovery from a downturn, sounds more like an ad for the NYT trying to rescue their subscription base. Selling new readers on their sycophants reporting will not stem their rapidly declining credibility. Being a tool of the globalists just brings higher unemployment to the Gray Lady.

For the few work opportunities that make it into the economy, many are part time positions with little or no benefits. US News forecasts the harsh awakening in,Larger Temporary Workforce Could Be New Normal.

“If you look at the bigger picture … we’re moving toward a new reality in the way we work,” says Kathy Kane, a senior vice president at staffing firm Adecco in New York. “A lot of those companies are sitting on a lot of cash, but they’re uncertain with economic stability. They’re looking at contingent and temporary work as more of a risk-management strategy right now. They’re trying to put their toe in the water versus jumping back in with both feet.”

Employers view the workforce as more flexible than in the past. It’s expensive to lay off full-time employees during a slowdown then hire new ones when business recovers. So rather than take on a new batch of full-time employees, companies have opted to hire on a contingent basis. “Companies are migrating their workforce from 100 percent core down to 80 or 90 percent core, and then leaving 10 to 20 percent of their workforce as what I would call ‘perpetual contractors’ or ‘definite temps’ with no expectation to ever move those people back to their core workforce,” says David Lewis, executive director of franchising at Oklahoma City-based staffing firm Express Employment Professionals.”

As corporatists make record earnings and hoard their cash, the prospects for the next generation of workers sink into a deep depression. No wonder, Unemployment as a Lifestyle, becomes the fate for the fertility of the future occupation cycle.

Once the benefits of the consumer society were lauded as the engine of affluence. The fruits of that approach sunk into the abyss of debt financing that are unserviceable. Those older workers who labored in positions that allowed them to accumulate a modest savings are now devastated by the zero interest rate policy on savings. However, just ask the indebted consumer paying, frequently above 20% interest rates on their credit card, how they are doing?

The globalists want the slave labor Chinese model to be the standard for the captured internationalist system of managed trade. The lesson described, back in 2006, in the article; Running Chinese Trade Deficits, illustrates why the balance of trade will remain a real drain on the domestic economy.

“The U.S. trade deficit poses great risks for the economy. The U.S. must borrow abroad to finance its trade deficits. The recent decline in the dollar indicates that private foreign lenders are less willing to supply new credit. Foreign governments stepped into the gap and financed a growing share of U.S. international debt in recent years. A rapid, uncontrolled decline in the dollar could destabilize U.S. financial markets and sharply increase interest rates and inflation. Foreign governments, primarily in Asia, have provided a substantial share of the net capital inflows in recent years.”

Some five years later, we observe that the Chinese are resisting buying any more of U.S. Treasury debt. The U.S. Bureau of the Public Debt calculated it at approximately $8.36 trillion dollars, back on May 14, 2006. Under the Bush/Obama “too big to fail” bank bailout, that figure will soon double, even before the next President takes office.

How can any new administration alter the destructive government policies that are carrying us into a black hole, when both Romney and Obama are committed to maintain the same mercantile trade policy that only benefits, global capitalism.

Make work jobs are akin to slave labor. Substantive and enduring employment requires that the entrepreneur have access to currency liquidity, in order to liberate the velocity of money so that cash flow can finance expansion that allows for the hiring of new employees. Will this happen?

Regretfully, the reality we face looks squarely to the tearful eyes of not just a distressed generation, but also a lost nation.