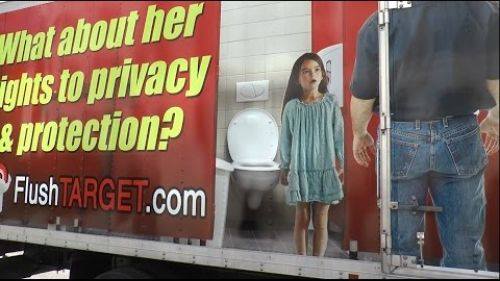 Below is a Dialogue between a transgender defender and the author about the Featured Image.

KBS: That man does not identify as female and would certainly not be in the lady’s room. Nobody is suggesting that a child molester be let into the bathroom with little girls.

Author: How could you possibly know what gender anyone “identifies” with? Unlike biological sex determination (chromosomal), the purely arbitrary concept of gender fluidity makes such determination impossible.

KBS: Well, gee, because he’s dressed as a scary man cause that’s he purpose of the picture – to scare people.

Author: What’s so “scary” about what him/her?

KBS: Okay, those are yucky stories of the type that there have always been. They bear little to no resemblance to the kind of assault that people are concerned about. Furthermore, you can’t really tell me that you don’t know that the picture with your article was deliberately used to scare people. You’re much too bright for that and I don’t believe you!

Author: Whether or not the photo was staged is not relevant to the question at hand, which is: Should we determine entry into restrooms on the basis of self-perceived “identity” (which even supporters of shared bathrooms admit is fluid and non-definable), or should certain standards of propriety, privacy and dignity be retained?

Author to KBS : Furthermore, the stories outlined in the article are precisely reflective of the repercussions inherent to de facto mixed sex bathrooms.

KBS: Yes, possibly, but not to transgender bathrooms where the transgendered person is mentally and emotionally of the opposite sex from his or her physical sex. Did you ever read the book “Middlesex”?

Author: Approximately 1 in 2,000 people exhibit hermaphroditism. Many so-called transsexuals do not have sexual dimorphism. Many  retain their birth genitalia.  Rather, they ascribe to an amorphous self-definition of “gender identity”, which is often physically and emotionally indeterminable, as well as transitory. The notion that cultural and societal mores and rights to dignity and privacy should be eliminated is a reductio ad absurdum solution. A much more accommodating resolution is private, single occupancy facilities. But this is non-acceptable to the radical transsexual movement.

And here’s an article of note from Breitbart.com.