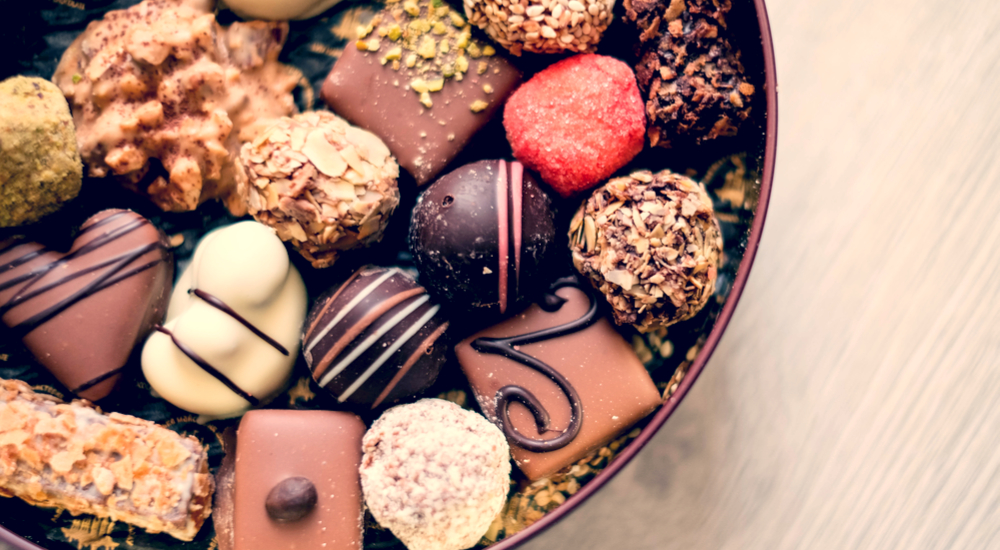 Since everyone seems to be obsessed by conspiracy I thought this little break would be good for everyone, especially during our holiday season.

A conspiracy is threatening our nation and no-one has the power to stop it. I am not talking about the military industrial complex or foreign terrorists bent on the destruction of the United States. I am talking about a conspiracy of much greater magnitude between the confectionery industry and the weight loss industry.

Ever since Thanksgiving reared its head with pumpkin pies, chocolate covered lollipops in the shape of pilgrims and those evil yellow peepers the sugar industry has inundated our lives with tons of holiday delights.

They could be found everywhere. When one woke up in the morning they were next to our breakfast cereal in the form of clover-shaped green marshmallows. Our coffee went from bitter and black to sweet and creamy. Driving to work, little bags of crispy treats were found on the front seat of the car and even the toll booth attendants gave out little foiled wrapped kisses along with their morning greetings.

Upon arrival at work, everyone seemed to have their own sweet little treat. The exchange of candies and holiday cakes continued through lunch. At least what most of us used to think was lunch.

The midday meal used to consist of a plastic-wrapped tuna salad sandwich stuffed under a two-month-old apple or pear. If you were really lucky you might find a brown spotted banana in a brown paper bag.

The holiday lunch consisted of jellied ham sandwiches, fruitcake, Christmas cookies and walnut laden chocolate brownies smothered with powdered sugar to the point where you expected to see a small plastic man skiing down its slopes.

Not a week of the holidays went by without a new discovery of new types of cake or candy from parts of the world you never heard of. Chocolates of every stripe and hue were sculpted into ships, famous landmarks or people. Every day colleagues and business associates would bring in their spouses’ favorite concoction, insisting that everyone take a piece in return for rave reviews about how this particular confection should be put on the market immediately where it would assuredly make millions of dollars.

You never drove home alone at this time of the year. There were always cellophane bags of lollipops, cashews, chocolate pieces, and the indispensable slab of fruitcake on the front seat to be replaced by your own spouses’ favorite treat to be ferried back to the workplace the next day. The only sounds on the radio were holiday songs broken up by men and women pitching even more of the perfect holiday treats.

Evening relaxation, one spent watching TV sitcoms, sports shows, or news shows was replaced by cooking shows demonstrating how any homemaker could become a confection chef extraordinaire. It became almost impossible to differentiate between the commercials and the shows. Dinner consisted of the most remarkable foods surrounded by colorful treats. It was hard to see where dinner ended and dessert began.

This insanity went on for an entire month, only to come to a crescendo during Christmas week. It seemed as though everyone was locked into some kind of mad contest to see who could bring in the most sugar-filled delights.

You might think this insanity would wind down after Christmas but no chance – not with New Year exactly one week later. This meant a continuation of the sugar binge with alcohol thrown in.

It was only at the stroke of midnight on New Years that it all came to a halt. The bright colors of the holiday season were put away and the confectionery pipelines shut down as if the world had finally run out of sugar.

Early the next morning you could almost hear a sigh sweeping across the country followed by an agonized scream as the nation wiped off its steamed bathroom mirror and took the first good look at itself in six weeks.

This is where the conspiracy becomes evident.

The airwaves were no longer filled with commercials about cakes and candies but instead by pitches for the perfect diet, the perfect food substitute and, of course, the perfect exercise machine that promised to make you look like a respectable member of the human race again.

Overnight the multi-million dollar confectionery industry morphed into the multi-million dollar health industry. The morning breakfast was replaced by a foil wrapped piece of wood filled with fiber that promised to eliminate itself from your alimentary canal seconds after ingestion. It had the taste and consistency of drywall and I swear I still have the splinters embedded in my gums to prove it.

The drive to work was no longer accompanied by colorful cellophane wrapped treats. A barbell or an isometric rubber band sat on the seat waiting to be used in the hope of revealing the body lost beneath layers of holiday fat. The airwaves were filled with commercials about where to find the perfect gym or the most technologically advanced exercise equipment.

The post-holiday lunch consisted of a thin piece of not-so-real cheese smeared with a mustard substitute in a roll that contained more air than bread. The roll was generally so dry that you had to have a cup of water ready in order to replace the saliva it sponged up the moment you put it in your mouth.

Beneath the pseudo-sandwich laid another foil-wrapped piece of wood that promised a quick retreat to the nearest restroom. The most memorable part of this particular lunch was the brown bag that, on some occasions, had been imbibed only because of its superior taste.

What used to be a festive atmosphere at work became a place where stomachs growled and toilets flushed. The rosy red cheeks on everyone’s face, caused by the sugar-induced increase in blood pressure, were replaced by the pallid gray complexions of people who spent too much time in the bathroom. Instead of merry holiday music, the drive home was accompanied by the kind of flatulence that drowned out traffic. The radio was filled with messages that we needed to be punished for our holiday excesses, punishment reinforced by the music of Donna Summer and the Bee Gees.

Nightly TV commercials continued with artificially enhanced celebrities promoting only healthy and active lifestyles. Gone were the cooking shows, replaced by svelte and beautiful people who must have been isolated on some remote desert island for the entire holiday season. Dinner went from feast to famine. Gone were the colorful treats around the dinner plate, replaced by wafers and crackers around bowls of thin soup.

A conspiracy is threatening our nation and no one has the power to stop it. It will take us many weeks and many millions of dollars to become what we once were. The confectionery industry and the health industry have obviously joined forces to control our lives and empty our pockets. We will struggle in vain over the next few weeks to regain control of our lives and our appetites only to watch the confectionery industry rise up again in the form of a giant chocolate heart. Valentine’s day is only six weeks away.