The Story of Eldridge Cleaver: From Communist Black Nationalism to Faith 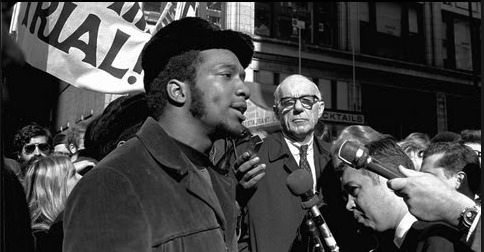 Eldridge Cleaver was a leader of the Black Panthers who, because of his many crimes, was often in prison where he wrote “Soul on Ice”, a commentary on prison life and racism in America which became an international best-seller and was basically the “manifesto” of the Black Nationalist Movement in America and abroad. He also ran for President of the United States of America for the Black Panther Party — he got few votes but much publicity. In “Soul on Ice” Cleaver described his metamorphosis from rapist and drug-dealer to Malcolm X apostle to Marxist revolutionary, who became, virtually overnight, one of the leading exponents of “black liberation” in America.

In a shoot-out with Oakland police on April 6, 1968 in which Panthers Cleaver and Hutton participated, Hutton was shot dead and officer Richard Jensen, sitting in his prowl car, was killed with 13 bullets shot into his body. His partner, Nolan Darnell, who was sitting beside him, was wounded. The Panthers said it was self-defense, the police said otherwise. The Panthers were believed. Because of this incident, Cleaver was forced to flee the country to escape from the FBI, and he and his wife went to Algeria, a socialist land with close ties to Marxist states. As a fugitive he lived in Algeria, Cuba and France, and made trips to North Vietnam, North Korea and the Soviet Union. Everywhere he was wined and dined by the Communists.

However, while in these countries Cleaver began to see that they were not “workers’ paradises” as he had been led to believe. He saw the bone-crushing poverty. He saw that people had no freedom of speech whatsoever. They were, for all practical purposes, SLAVES. Those who dared to demonstrate for more money and better living conditions were mowed down. Cleaver became disillusioned with Marxist-Leninist-Socialism. Realizing that everything he had believed in and fought for was false, he suffered a nervous breakdown while in Paris and was on the brink of suicide. He pointed his Browning automatic to his temple, and while waiting for the courage to pull the trigger, he looked up at the moon and saw a profile of himself. As he stared at it, it changed, and then disappeared. Then he saw his former heroes paraded before his eyes . . . . Fidel Castro, Mao Tse-tung, Karl Marx, Fredrick Engels, Che Guevara, passing in review — each one appearing for a moment, and then dropping out of sight, like fallen heroes. Finally, at the end of the procession, in dazzling, shimmering white light, the image of Jesus Christ appeared. Cleaver remembered the sermons of his Baptist minister grandfather, and trembling, frightened and sobbing, he repeated what he could remember of the Lord’s Prayer and the Twenty Third Psalm. He fell to his knees and asked Jesus to forgive him and to become his Lord and Savior. Finally, exhausted, he fell asleep. When he awoke the next morning, he saw a path of light all the way to America, going through a prison cell. He got in touch with the FBI and said he wanted to come home and he was ready to stand trial and accept whatever judgment the law decided he owed society in order to reinstate himself and to erase his criminal past.

Two FBI agents, one white, one black, came to Paris and escorted him back to New York where he was arrested, booked and put in prison.  In November of 1975 he was transferred to a jail in Alameda County California where he met several Christian inmates who helped him strengthen his religious beliefs. He wrote another book, “Soul on Fire”, describing his spiritual transformation. He became a born-again Christian. In the summer of 1976 another born-again Christian, Art De Moss, posted the $100,000 bail for him. Once outside the prison, it was the Christian Evangelists who “wined and dined” him. He was world famous. He was offered a ministry of his own on TV which would have brought him millions — this he declined. He was not interested in becoming rich and famous as a preacher, on TV or off. He was interested in his people, specifically he was worried about the hundreds of thousands of young blacks in prisons and what would become of them — he wanted to help them and started a prison ministry.

During this time he also lost faith in the official agenda of the Democratic Party. He saw more and more blacks being born in poverty, living in poverty and dying in poverty. He saw the Democratic Party’s “welfare state” as a means of controlling blacks; keeping them down by placating them with “forced poverty” via welfare. He said America was the least racist country in the world, with the most freedoms. He decided to become a Republican. The Republicans “wined him and dined” him, just as the Communists and the Evangelicals had done. The Moonies had several anti-Communist organizations, and Cleaver was asked to speak at these. The Moonies wanted him to become a Moonie, he considered it but declined. At one of these speaking engagements, Cleaver met Cleon Skousen, former FBI agent, former Chief of Police of Salt Lake City, popular Mormon writer and founder of the Freeman Institute (now called The National Center for Constitutional Studies), an organization that tries to educate the public about what the Constitution means. He wrote the magnificent book “The 5000 Year Leap, a Miracle that Changed the World” about the Constitution. Skousen asked Cleaver to speak at a few Freeman Institute meetings. The two became friends.

In the first week of 1977, Cleaver stood trial, charged with three counts of assault against three Oakland cops and one count of attempted murder, carrying a maximum sentence of 15 years. However, a deal had been made between Cleaver’s lawyers and the authorities — if he pled guilty to the assault charges, the attempted murder charge would be dropped. In the end, Cleaver was sentenced to five years of probation and 2,000 hours of community service.

His legal troubles behind him, Cleaver stepped outside the courtroom into a glare of television lights. Immediately he attacked three black politicians in Oakland — Mayor Lionel Wilson, the Coúnty Supervisor John George, and Congressman Ron Dellums. He accused them of using  the issue of police brutality in the black community as a “political football”. He said, “We need police as heroes”.  Everyone was stunned. Could this be Eldridge Cleaver speaking? He even admitted that he and Bobby Hutton had attacked the police without warning in the incident in 1968, killing officer Jensen. At the time, Cleaver’s lies were accepted as the truth by the left and the media, and Jensen’s partner, Nolan Darnell, was prohibited from telling his version by a court-ordered gag. Neither Jensen nor Darnell were ever vindicated in regard to this affair, and Darnell thinks it was a miscarriage of justice to let Cleaver get away unpunished for his many crimes, born-again Christian or not. The ambushes by Cleaver and the other Panthers were deliberate, intended to launch a coordinated series of skirmishes with police that would spark ghetto uprisings across the country and cause chaos.

Because of Skousen’s influence, over the next few years Cleaver met other Mormons and began to study the doctrines of the Mormon Church, especially those concerning the family. Cleaver eventually became convinced that it wasn’t “social help” programs of the Democrats that would save his people, not even “self help” programs of the Republicans — he realized the solution lay in strong families, led by righteous men who ruled those families in righteousness. He got to know many Mormon families and saw this for himself. After much thinking about it, he came to believe the Mormon Church was the right one for him and in 1984, Cleaver was baptized into the Mormon faith. Ever after he always referred to himself as a “Mormon and a Christian”. He died in 1989. It’s a pity Cleaver’s testimony did not have more power to destroy the Communist influence in the black community.