Six String Soldiers Play for Patriotism and for our Veterans 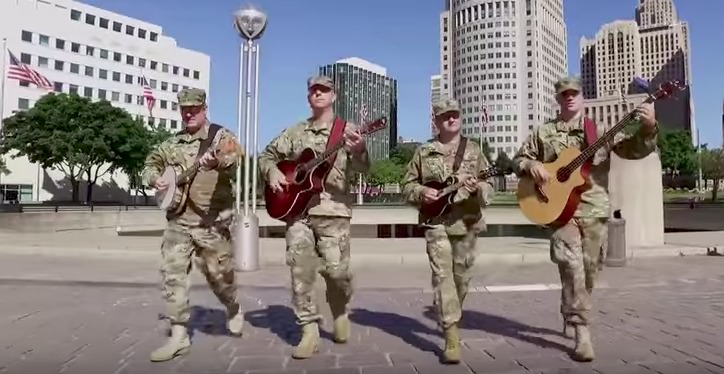 As we celebrate 241 years of Independence, we thank the generations of hardworking Americans from all different backgrounds and beliefs that have built this nation! We are proud to serve you!  — Six Sting Soldiers

The Six String Soldiers are a quartet of American heroes who have taken to using their musical talents to honor our nation and her people. They travel the world playing for soldiers, veterans, and Americans always reminding us that the men and women serving in the Armed Services need our support.

One of the messages that the Six String Soldiers carry around the nation is one that reminds us that we have asked for much from our soldiers. When they return home from the foreign fields, it is incumbent upon us, their fellow-citizens, to help them reacclimatize to life away from war.

A study conducted last year found that our veterans are 21% more likely to attempt suicide than the average American. In fact, the data tells us that we lose about 20 veterans to suicide every single day and they account for 18% of American suicides, even though our veterans only account for 9% of the population. Our veterans deserve better, and it is up to us to give them a better way forward.

However, the band also reminds us of the sorry state of affairs in the VA medical system. For years, we’ve known that the VA has been a quagmire of waste and corruption but our political leaders have seemed impotent to do anything about it. “Fixing” the VA has been a recurring theme of every presidential campaign for the last 30 years or so. President Trump seems to be in a unique position to finally make some real progress in the fight to fix the VA as his “outsider” status means he’s not beholden to the partisans or processes that have held the agency down for so long.

Enjoy the music from the Six String Soldiers.

This Land is Your Land:

Proud to be an American: