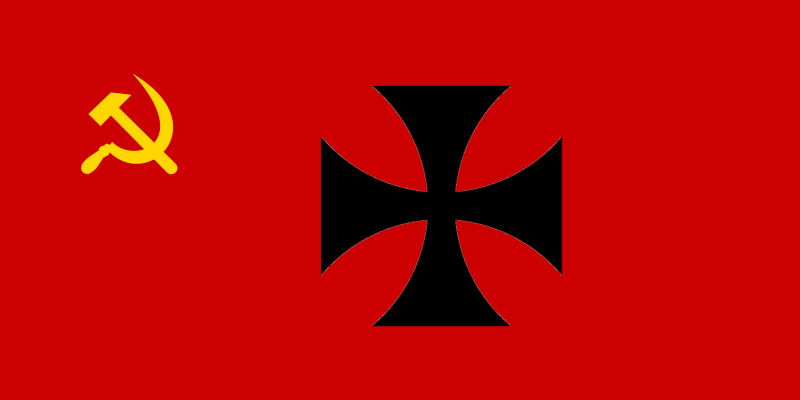 Another leftist shot ten schoolchildren, this time in Texas. On Facebook, he published photographs of his trench coat, on which two well-known symbols of close, but not identical, leftist ideologies – communism and national socialism – are clearly visible: the sickle and hammer and the Iron Cross of the Third Reich.

The ideological affinity of all leftists means that all these leftist movements pursued the same portions of the electorate. Perhaps that is why the USSR fought on the side of the Third Reich about one-third of the Second World War and two-thirds against it (unlike other allied countries that ideologically were on the opposite end of the political spectrum both from the USSR and the Third Reich).

The proximity of the Soviet and German schools of socialism is well known, but few people know that the differences were already laid down in the names. The left-wing labor movement headed by Hitler was national (National Socialism), but the movement in the USSR was always international. In 1930s Germany, this led to numerous bloody street brawls between supporters of national and international versions of socialism.

Nowadays, as in the last century, few people pay attention to details. As before, it is enough to add prefix “anti” to something hated to be known as a humanist. But this, as we know, is not at all the case. Not only people with a low I.Q. but also Nobel laureates have taken this bait. For example, Ernest Hemingway was a fierce anti-fascist all his life, which does him credit, but this did not make him a proponent of right-wing ideology. On the contrary, the convinced anti-fascist Hemingway steadily moved ever farther and farther left, until eventually, he became an agent of the NKVD named Argo (he did nothing in this field, but that is another story).

Leftists suspect themselves to be fascists, so they defensively feel the need to label themselves anti-fascists. Simultaneously, they attempt to tag the right as fascists. However, anti-fascism is just the denial by the leftists of one of their own branches of ideology.

The murderer of schoolchildren in Texas understood that the Soviet sickle and hammer, on the one hand, and the Nazi Iron Cross, on the other hand, are symbols belonging to the same ideological direction. We do not yet know how strong the ideological convictions of this murderer are. But we know one thing: America does not want to endure the massacres of children anymore – as we do not want to see another gun-free zone filled with blood.

I would like to describe one episode that happened to my family and me. What happened makes it possible to hope that our country will eventually make the right decision without changing the Constitution.

Many years ago, we bought a new house – not very far from the former, but in another town (and another county). The closing of the sale was scheduled for early October. The children were already of school age, so a dilemma arose – to start school in September in the former town, and in a month to transfer the children to a new school, or to start a new school year in a new school in a new town. The principal of the new primary school did not mind but warned that we would have to bring the children to school ourselves because he did not have the opportunity to send a school bus outside the county.

So for one month, I drove my children to school in the morning, and at 3 P.M., I came to pick them up. On the very first day that I came to pick them up, I found that the doors to the school were closed. I called, and the door was opened by a middle-aged policeman. I explained that I had come for the children, and he pointed me to a white strip on the floor about ten feet from the door: “Stand here. Wait. And do not cross the white line. I shoot without warning.”

During the month of our conversations, we became good friends. Sometimes he received some messages on the radio, and once two more policemen from the corner of the corridor of the school suddenly appeared. So, we, the parents, learned that all halls of the school are patrolled continuously by armed to the teeth policemen.

These police officers may never have heard of the political spectrum, and may not understand all the nuances of the fact that fascism is an extremely leftist ideology. But they were ready to protect our children from the right and left terrorists, from the mentally ill, and from any other ideologically savvy killer revolutionaries.

Being taxpayers, our police officers must protect our children from fascists and anti-fascists alike, shooting without warning if someone crosses the line.

Massacres in Israeli schools are non-existent nowadays, just like gun-free zones. American schoolchildren deserve the same protection as their Israeli counterparts. Being a small country, Israel armed whom it could to protect their children: their teachers. In America, it makes no sense to arm the teachers for a variety of reasons. We should allow our teachers to arm themselves, but it should not be a government policy.

Paradoxically, in order not to turn our country into a police state, we need police officers in every school.