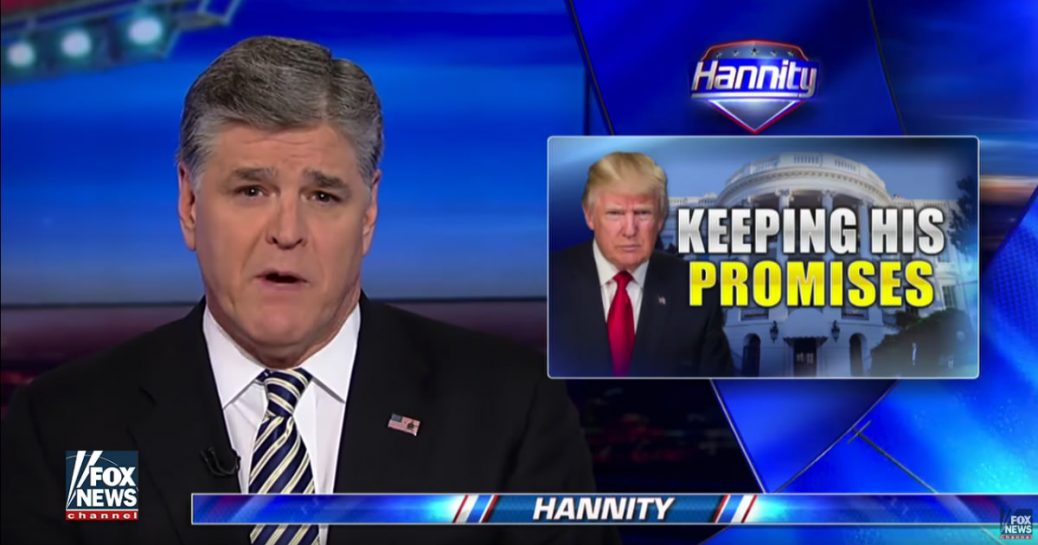 Sean Hannity has been a big fan of President Trump since way before most of America really believed he could actually become our President. Hannity has stuck with Trump through the good times and the bad, and has supported him even when things looked bleak. However, President Trump’s recent attacks on the conservative wing of the party have Hannity worried and so he’s speaking out in an effort to remind the President who his friends really are. In a monologue for his show on Thursday night, Hannity told the President that the GOP failure to pass Ryancare should not be laid at the feet of the conservatives in the House Freedom Caucus but they should be blamed on the failures of the House leadership instead.

“Let’s start with the Republican Leadership plan to repeal and replace Obamacare stalled in Congress. Well, the mainstream media wants you to believe the Trump presidency is dead in the water. Since taking office the president has been checking off, look at that, all the items on his list, all his campaign promises one by one.

Now it’s very obvious that the president has been moving very fast and effectively, at what I call the ‘speed of Trump.’ And now after the Republican health care plan did stall in the House with in-fighting in the Republican party, there is a danger that could undermine the president’s agenda.

Now earlier today, the president tweeted, ‘the Freedom Caucus will hurt the entire Republican agenda if they don’t get on the team, and fast. We must fight them, and Dems, in 2018!’ Now the president’s clearly frustrated with this division in the Republican party. On this show, we promised, we’re holding everyone in Washington accountable.

Now in my opinion, it’s not the Freedom Caucus that’s responsible for the GOP failure in this case to repeal and replace Obamacare. Now this legislation was flawed from the beginning. It was created behind closed doors. Not one single member saw the bill until it was rolled out. And that made it a disaster.

Now I don’t know who’s telling the White House to focus their anger on the Freedom Caucus, but I do think it’s misplaced. Because the Freedom Caucus, I’ve talked to them, they want to make a deal, and they want the win for the president and the country. So my advice tonight to Speaker Ryan and to Congress is simple. House leadership you need to get all the differing factions in your caucus together.

Get them together with senators like Rand Paul and Mike Lee, Mitch McConnell, Secretary Price, I’ve said this before. Get all the factions, the moderates, the Tuesday Group, the Study Group, the Freedom Caucus, get everybody in a room, lock the door, order pizza, get beer, get ice cream, I don’t care if you include coloring books. Get a consensus bill like you’ve been promising the country for eight years, and get it done and get it on the president’s desk.

That is your mission. Follow your mission, and your promise. It’s not ideology. It’s what’s good for the American people and the promise you made to everybody.”