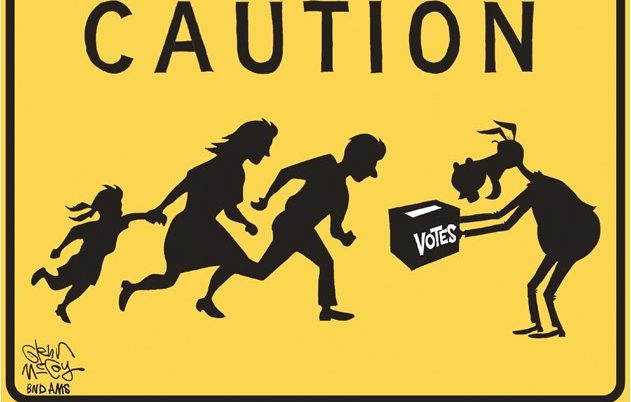 Democrats feasted and celebrated shutting down the government on the anniversary of Trump’s inauguration, denying military servicemen their pay, taking their stand to import foreign cheap labor, and to keep foreign criminals in the country while blaming Republicans.  Schumer & Co. are happy to create this fiasco deliberately attempting to distract from the economic boom that Trump has created, as well as attempting to conceal the revelations of the FISA crimes of Obama, Hillary, and Democrat leaders like himself that Trump is uncovering.  Trump dumped on Schumer summoning his “old friend” to White House to castigate him for shutting down government with each blaming the other for this debacle.  Schumer’s response claiming that Republicans control the White House and Congress so there’s no reason for the shutdown, except that Democrats created the procedure by which sixty votes are required to pass this legislation, makes clear their intentions to undermine America.  Polls blaming Republicans are more fake news for the ignorant Democrats because, as any thinking person knows, when you blame others for what you are doing and try to cover it up with lies, then the jobs stolen by illegals, and the blood of Americans shed by foreign criminals, is all on their hands.

“Democrats do not oppose anything in this bill, but they are opposing it.” – Mick Mulvaney

Even though the current shutdown is over, Democrats continue to lay plans to do it again and again until Republicans cave in to their amnesty with no border security agenda.  Trump gave Democrats everything they asked for in this bill and they gave nothing back, yet they are shutting down the government over it.  This is akin to Clinton giving Arafat everything he wanted for a Middle East peace and he walked out because he wants the chaos.  Democrats are doing this strictly to smear Trump and cause Americans pain because they care more about foreign children than about American children.  They are doing this to detract from the Trump economic revival.  Schumer says he offered a plan to Trump that included a wall but, as Mick Mulvaney makes clear, Democrats always lie with what they say about what they will do about illegal immigration, which is never what they mean to do.  Schumer offered only what he already voted for a decade ago, which is approval for the wall, but no funding to build it.  Democrats demand Trump keep the VISA Lottery and Chain Migration that would keep their cheap labor, foreign criminals, and terrorists pouring into the country.  How stupid do they think people are, especially when they refer to their Chain Migration, a term they coined, as racist against Africans who were brought over in chains?  Republicans, rather than bowing down and taking the blame, are turning the tables using Democrat’s own language against them.  When Obama claimed Ted Cruz was holding America hostage over the last shutdown they surrendered, but now it is they holding American patriots hostage.  Now they are slamming Schumer who is rejecting everything Democrats say they endorse in order to screw over Trump in the eyes of Americans.  But Trump will have none of it and labelled this the Schumer Shutdown on Twitter as he has labelled all who have opposed him – and his labels always stick!

Democrats own this shutdown

Democrats put the children of illegals who snuck into the country to steal jobs ahead of the families of those who serve this great nation my risking their lives.  Soldiers go without paychecks to support their families because of the Democrat’s shut down that they blame on Trump for not giving illegals amnesty and keeping the borders open.  Police and fire pensions are being raided by Democrats so they can fund their sanctuary cities to keep illegals, even violent criminals, in the country by protecting them from deportation.  Democrats are shutting down the government over a bill with which they have no issues just to distract from the two greatest issues in America today; the great economic revival under Trump by his hand, and exposure of Clinton and Obama spying on the Trump campaign to sabotage the election process.  The filibuster rule was only installed to give Democrats the ability to block legislation permanently at their will.  This is nothing less than the tyranny of the minority.  When they use this rule to obstruct Republicans, not only from making America great again, but even carrying on business as usual, and blame Republicans for not “leading by compromising with Democrats” to advance the Left’s anti-American agenda, it is time that Republicans retake America from the Left that has corrupted it for the last century.  With senators like Lindsey Graham (R-SC) who sides with Democrats on amnesty (he may as well be a Democrat and stop pretending) then it is time Republicans nuke the filibuster rule of Democrats!

Democrats have offered America nothing but hatred of Republicans since Lincoln, high taxes, and foreign invaders of cheap labor, criminals, and terrorists.  Ever since they caused the Great Depression they have yearned for more Stock Market collapses and even predicted that the Market would collapse because of Trump’s election.  Instead it has skyrocketed over 50% in one year!  The Market doubled under Obama over eight years, but all of that was due to his taking borrowed taxpayer dollars, i.e. printing money, and giving $800B a year for eight years to his Wall Street cronies calling it “Stimulus” and “Quantitative Easing.”  Trump’s economy has grown purely through his unleashing economic activity that Obama had squelched and not by putting one penny of taxpayer money into the Market.  Trump said the government needs a good shutdown, not to make Americans suffer, but to expose the Democrats for what they are.  They would take taxpayer money and give it to foreigners rather than America’s military, police, and fire services.  The last shutdown under Obama they weaponized against Americans by putting armed guards outside of National Parks and closing monuments, even going so far as to erect barricades around the WWII Memorial.  Only Sarah Palin and a few brave senators stood up against Obama and pulled down the barricades around the WWII Memorial for visiting veterans.  These crimes against Americans were answered with the election of Donald J. Trump and his ripping Obama’s legacy of making America weak to shreds.  Democrats will own this shutdown and they will not be able to shift the blame of their crapping on American soldiers, police, and fire personnel, of pissing in the faces of taxpayers, as they have in the past.  Trump MAGA!  Nuke the Democrat filibuster, change the voter laws to stop their fraud, and never let them regain power to subjugate Americans again!

Shutdown is to distract from Trump’s booming economy

This is what socialism breeds – California surpasses Mississippi in poverty