We’ve Been Duped! Russia Has Stolen the Narrative! 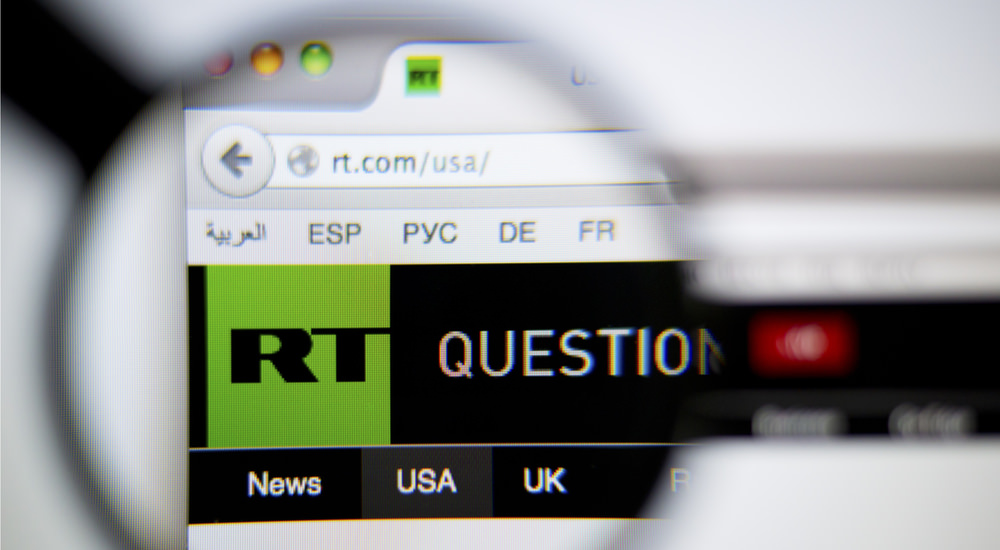 But this happenstance-appearing effect was completely calculated.  As is the upcoming civil war.  We’ve been duped.

For the usual Nietzschean “transvaluation of values” to pave the way for tyranny and dictatorship – Hitler understood this well – the values of RT are solidly implanted and accepted in North American media. Woe to us.

If George Washington were alive today, he would see the critical need to change his Farewell Address with its famous “No Foreign Entanglements” warning (as popular as Eisenhower’s 1960 warning on the military/industrial complex) to “No Foreign Mind-Control Entanglements.”

The transition for RT was smooth and seamless. Just as the goal of Marxist social engineer Theo Adorno was to infiltrate rock music into the Church, the “moral high ground” of Russian-not-American RT successfully inundates daily video reports, even into the most moral and conservative of Christian prophecy dailies on the Internet including Pat Robertson’s 700 Club.  But the Bible warns, “Let no man deceive you.”

Exactly what General Douglas MacArthur feared, when he expressed the final battles for America would be media wars! And while General Matthis appears to now be picking up where General MacArthur left off with North Korea, we are clearly losing the media narrative at home.

It hearkens back to the 1990s, when the globalists were confronted with a decision. “Should they bring the US to the side of Russia, or Russia to the side of the US?” It was decided to bring Russia into the US. Bill Clinton went right to work and imported 700,000 pre-positioned Makarov pistols into Colorado, signed the Treaty on Open Skies so Russian chopper pilots could fly anywhere in the US, and 400 Russian train engineers were instructed how to navigate North America in Florida.  Russian Mafia in New York were allowed to extract $17 billion in medicare per annum.  And now RT.

Meanwhile, RT (as planned) assumes the strongest narrative in western media. With all the daily, systematic, fake news spilling like hot lava into living rooms, the globalist effect is finally achieved, as planned, with the overwhelming acceptance of the “moral high ground” of the strong RT narrative. How quickly the public overlooks there is a controlled-right as well as a controlled-left media.

Wittingly or unwittingly, but habitually and chronically, Infowars always grants RT the stronger narrative, keeping itself beneath with its intended daily tabloid and risque qualities, its daily offensive outburst of agitating profanities, and giving little to no coverage of Russian anti-American activities. Indeed, all one has to do is a sagacious contrasting study of anti-American Russian coverage, courageously offered by Dave Hodges’ The Common Sense Show, to Russia-ignoring Infowars.

Indeed, many of Infowars’ most popular writers – including Paul Joseph Watson – are regular writers for RT. Alarm bells go up! While talking the talk to fight globalism, they are not walking the walk, receiving their pay from RT and being globalists in practice; while fostering self-fulfilling prophecy attempts for civil war, which Russia has planned since the 1980s to come in and control.

David Chase Taylor has written much on RT-approving Infowars. Those interested in Koch-funded “right wing” media should read his articles which continue to endanger his life, as he fights for political asylum in Switzerland. As with The Common Sense Show, one can find true news on Russia here in the left column: https://truthernews.wordpress.com/2012/02/16/alex-jones-cancels-speaking-tour-after-exposure-as-stratfor-double-agent/

What we need is an AT (America Today) sponsored and monitored by President Trump. Vigileaks is convinced General MacArthur would see this as the only solution. Otherwise, the “moral high ground” of the transvaluation of values continues. We’ve been duped. Duped into thinking “The grass is greener in other cultures.” Will President Trump restore American media in time?

Vigileaks cannot stress enough the urgent importance to share this widely and to the maximum over the media!