The Religion of Peace Exposed by its Own Books 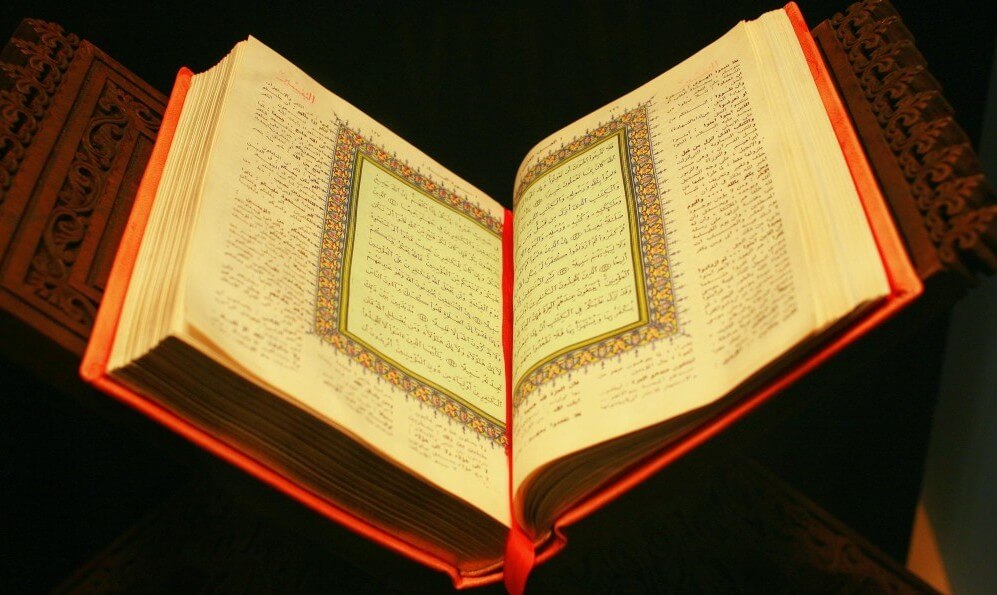 The Religion of Peace From Their Own Books:

Qur’an (8:39) – “And fight them until there is no more Fitnah (disbelief and polytheism: i.e. worshipping others besides Allah) and the religion (worship) will all be for Allah Alone [in the whole of the world ]. But if they cease (worshipping others besides Allah), then certainly, Allah is All-Seer of what they do.” Translation from the Noble Quran

Qur’an (9:29) – “Fight those who believe not in Allah nor the Last Day, nor hold that forbidden which hath been forbidden by Allah and His Messenger, nor acknowledge the religion of Truth, (even if they are) of the People of the Book, until they pay the Jizya with willing submission, and feel themselves subdued.” Suras 9 and 5 are the last “revelations” that Muhammad handed down – hence abrogating what came before, which includes the oft-quoted verse 2:256 –“Let there be no compulsion in religion…”.

Qur’an (9:5) “But when the forbidden months are past, then fight and slay the Pagans wherever ye find them, and seize them, beleaguer them, and lie in wait for them in every stratagem (of war); but if they repent, and establish regular prayers and practice regular charity, then open the way for them…” Prayer and charity are among the Five Pillars of Islam, as salat and zakat. See below. Islam sanctions violence as a means of coercing religion.

Qur’an (9:11) – (Continued from above) “But if they repent and establish worship and pay the poor-due, then are they your brethren in religion” This confirms that Muhammad is speaking of conversion to Islam.

Quran (9:56-57) – “And they swear by Allah that they are most surely of you, and they are not of you, but they are a people who are afraid (of you). If they could find a refuge or cave or a place to enter into, they would certainly have turned thereto, running away in all haste.” This refers to people living among Muhammad’s own people who may not be true believers, but have to pretend to be in order to survive. They have no safe refuge to which to escape the Muslims. If Islam were a religion of peace, then why the fear?

Qur’an (3:83) – “Are they seeking a religion other than Allah’s, when every soul in the heavens and the earth has submitted to Him, willingly or by compulsion?” So much for the earlier verse (2:256) stating that there is “no compulsion in religion”.

From the Hadith:
Sahih Muslim (1:33) The Messenger of Allah said: “I have been commanded to fight against people till they testify that there is no god but Allah, that Muhammad is the messenger of Allah, and they establish prayer and pay zakat.” The first part of this condition is the Shahada, or profession of faith in Islam. Violence is sanctioned until the victims embrace Muhammad’s religion.

Sahih Muslim (19:4294) – “When you meet your enemies who are polytheists (which includes Christians), invite them to three courses of action. If they respond to any one of these, you also accept it and withhold yourself from doing them any harm. Invite them to (accept) Islam; if they respond to you, accept it from them and desist from fighting against them … If they refuse to accept Islam, demand from them the Jizya. If they agree to pay, accept it from them and hold off your hands. If they refuse to pay the tax, seek Allah’s help and fight them” Osama bin Laden echoes this order from his prophet: “Does Islam, or does it not, force people by the power of the sword to submit to its authority corporeally if not spiritually? Yes. There are only three choices in Islam … . Either submit, or live under the suzerainty of Islam, or die.” (source: The al-Qaeda Reader p. 19-20)

Bukhari (8:387) – “Allah’s Apostle said, ‘I have been ordered to fight the people till they say: ‘None has the right to be worshipped but Allah.’ And if they say so, pray like our prayers, face our Qibla and slaughter as we slaughter, then their blood and property will be sacred to us and we will not interfere with them except legally and their reckoning will be with Allah.'”

Bukhari (2:24) – “Allah’s Apostle said: “I have been ordered (by Allah) to fight against the people until they testify that none has the right to be worshipped but Allah and that Muhammad is Allah’s Apostle, and offer the prayers perfectly and give the obligatory charity, so if they perform a that, then they save their lives and property from me except for Islamic laws and then their reckoning (accounts) will be done by Allah.”

Bukhari (60:40) – “…:And fight them till there is no more affliction (i.e. no more worshiping of others along with Allah).” ‘Affliction’ of Muslims is explicitly defined here being a condition in which others worship a different god other than Allah. Muslims are commanded to use violence to ‘rectify’ the situation.

Bukhari (59:643) – “Testify that none has the right to be worshipped except Allah, or else I will chop off your neck!” Words of a military leader that Muhammad sent on an expedition with the mission of destroying a local religion in Yemen.

Ibn Ishaq/Hisham 959 – Then the apostle sent Khalid bin Walid… to the Banu al-Harith and ordered him to invite them to Islam three days before he attacked them. If they accepted then he was to accept it from them, and if they declined he was to fight them. So Khalid set out and came to them, and sent out riders in all directions inviting the people to Islam, saying, “If you accept Islam you will be safe.” So the men accepted Islam as they were invited. The text goes on to say that Khalid taught the al-Harith about Islam after their “conversion,” proving that it was based on fear of slaughter rather than a free and intelligent decision.