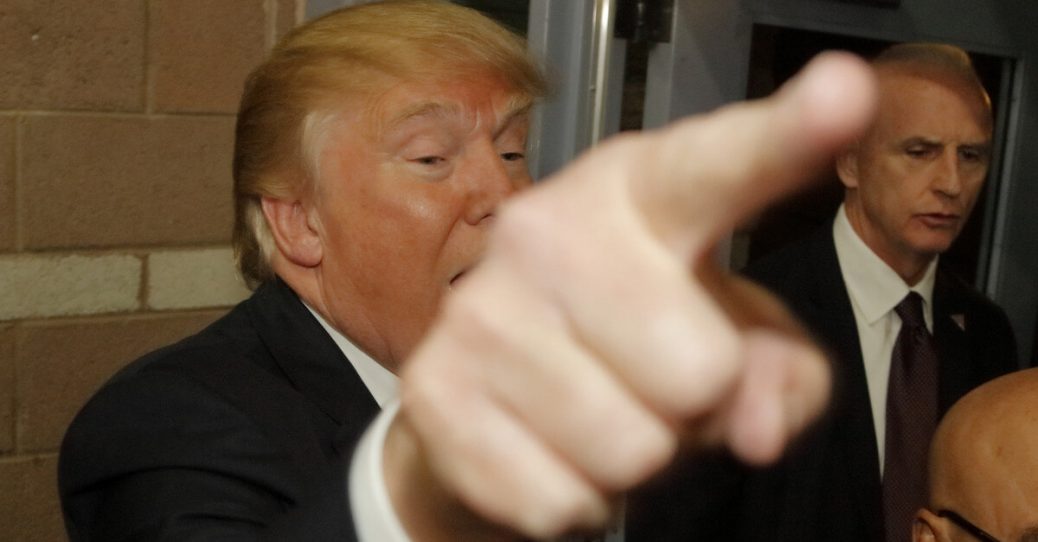 Stubborn, boisterous, uncouth and often viewed kicking and screaming, does this remind you of a particular barnyard animal or did a presidential candidate come to mind?

Some are concerned as to why there are strong Christians so “infatuated” with Trump. Let’s clear the air on that one. They are not infatuated with Trump; they are infatuated with Christ and see how God can use him and them at the same time.

There is indeed a Christian camp divided, which should come as no surprise and is nothing new.   Christians are very

at odds on electing a strong leader who is not a Christian, or portrays Christian social values. Many seem to be concerned about social conservative values and morality. There is an assumption that morality can be voted on or legislated.   Libertarians and social conservatives should take note and should be working together.

Dr. Martin Luther King Jr. in his speech at Dartmouth (1962) said, “It may be true that morality cannot be legislated, but behavior can be regulated. It may be true that the law cannot make a man love me, religion and education will have to do that. But it can keep him from lynching me and I think that is very important, also.”   His listeners laughed at the last line that day. However, his last line was proved incorrect on April 4, 1968 in Memphis. Murder has been legislated against for quite some time now. Legislation did not change the morality of those who wished him dead.

Dr. King and Senator Goldwater were on the same team. Barry Goldwater voted for the Civil Rights Acts of 1957 and 1960. The Senator pointed out the dangers of legislating morality when he expressed concern about Sections II and VII in the Civil Rights Act of 1964. He viewed them as an over-zealous attempt to unconstitutionally regulate commerce in the drive to legislate morality.   Senator Goldwater was more of a libertarian than conservative, understanding that morality cannot be legislated. His libertarian leaning is evident in his advocating for homosexuals in the military and abortion rights.   As a reminder, Mr. Goldwater was a presidential candidate in 1964. Ronald Reagan’s “A Time for Choosing” speech was during Goldwater’s campaign.

Morality is determined in one’s soul (will, mind and emotions). It is impossible, unconstitutional and unbiblical to legislate thoughts of the soul. God, is in His omnipotent wisdom, has the ability to transcend the soul and judge the thoughts. Man can legislate the physical body by causing action for consequences the body commits. Man is known by the fruits of his thoughts; this is the outcome of one’s morality. As “fruit inspectors,” society can respond to one’s behavior.

A GOOD OF FREEDOM

American Christians somehow feel that legislating morality is the key to creating a God fearing society.   Christians should indeed be involved in politics and run for office. However, Christians readily admit that the sinful or ungodly nature of man is innate. All the rules and laws passed are moot as applied to the thoughts of the heart and soul. Yes, God can see one’s thoughts, but man cannot regulate them.

Christians should be involved as political leaders just as they should be leaders in business, education, the arts, media and the family. However, does that mean a Christian leader is required? Is it necessary to have a Sunday School teacher in the White House? One is aptly reminded that having a Sunday School teacher in the White House is not always what is best for the country or for more than sixty hostages held in Iran. Jimmy Carter’s presidential legacy may be that he didn’t leave one.

Personally, I thought it awesomely cool such a Godly man was in office, even visiting Plains, Georgia. However, the telling sign of my change in thinking came the day I held a Carter/Mondale sign in one hand while shaking Ronald Wilson Reagan’s hand with the other, the day before the presidential election of 1980. One hand contained a sign of my Sunday School thinking while the other hand followed my heart and was drawn to a greater good, a good of freedom.

“Jesus loves you,” and the fine print read, “Satan thinks you’re a wuss,”

adorned probably the most thought provoking t-shirt ever printed. It is also eerily accurate. Christians have become wimps running around “saving souls” when they have been called to make disciples of all nations (MT 28:19). Christians have been given all power over the enemy (LK 10:19) but wish to defer that power to government programs and ministries inside the four walls of the church.   Christians, as previously mentioned, are to be leaders and influencers in government, education, the arts, media, family and business. However, Christians have predominantly missed the calling for the taking of nations. Islam has done a much better job in discipling nations than Christians have, by far. They do it by putting their leaders in charge of government, the arts, education, media, business and the family.   Ideals are promoted throughout all of these areas of influence.

Why are Christians so hesitant? Waving a magic voting wand to place a Christian as president will not change the hearts and minds of Congress or society. Christianity should weave its leaders and ideals into the fabric of society and create change from the inside out; it is the biblical mandate. Christians are a little too much like sheep sometimes. For those who believe in the rapture, it won’t happen until God’s kingdom mandate is fulfilled. Christ riding into Jerusalem on a donkey, on what is now called Palm Sunday, was the coronation of a Spiritual King reigning over a spiritual kingdom. Christians are called to bring to life by discipling nations. Christians did disciple one nation, but had to do it from the start and have since lost control (The United States of America). Can they not do it from the inside? Can one not change the hearts of a country so that the majority is appalled at the killing of babies or the euthanasia of the elderly? Love wins, seems to be a call to arms. Love isn’t sitting around letting someone else do the work, allowing taxes to pay for welfare programs or legislate God’s will into being. Love and faith take action, or is God not big enough to take action?

Donald Trump may carry an anointing. Dr. Lance Wallnau and others have proclaimed Trump has an anointing from God to lead the United States, an anointing similar to Cyrus. Cyrus the Great was not a Sunday School teacher, he was the king of Persia. Cyrus ended the Babylonian captivity of the Jewish nation (EZ 1:1-4). In Isaiah 45, God calls Cyrus his anointed. God goes before him knocking down the gates of bronze and iron. He is knocking down the gates of influence of political correctness and political captivity.   Isaiah 45 continues with God asking, “Why have I called you and equipped you for battle when you don’t know me?” “So the world will know there is no other God.” The punchline here is a little scary for many Christians. After they were set free, the Jewish people had to return and rebuild the temple (EZ 1:3). This meant work. Many Christians are afraid of Donald Trump not because he is an unbeliever but because he means Christians will have to work. Dr. Peter J. Daniels has said many times, Christians would rather “sit around on their blessed assurance. “ Christians would rather just love everyone. Love will change the world, indeed, but only by it acts. Rebuilding the temple signifies reestablishing the ruling power of Christ’s throne and thus His kingdom. In addition, a more literal question could be posed. Could someone with a new Cyrus anointing be ushering in the rebuilding of the Temple in Jerusalem and could Christians be called to actually assist in this process?

Dr. Wallnau reminds that Churchill and Lincoln were not evangelical favorites but were appropriate leaders in perilous times. He also humorously points out that this destructiveness could be a referred to as a Miley Cyrus anointing, as Mr. Trump seems to be coming in like a wrecking ball destroying the political elite. What an opportunity for Christians to rise up after the destruction of the political elite!  It is time to do away with government programs and four-walled ministries that squelch the efforts believers like bureaucracy and meetings squash employees. Freedom allows Christians to engage society personally, or is that more work that Christians have signed up for?

s at the Biltmore Estate even today. The estate still has an active farm. The donkeys protect the sheep. I had never heard this until a few weeks ago when visiting the estate. Donkeys apparently do an excellent job in keeping predators away. Their territorial nature is ideal for guarding a flock. Their boisterous noise and strong kick could easily disable a foe.

Mr. Trump, with all due respect, you may be an Anointed Ass.

Mr. Trump is here to free Christians from political captivity and to protect the sheep who are the followers of the Lamb of God. Mr. Trump is here to empower Christians to work to rebuild the kingdom and disciple nations. Those who directly threaten the sheep are being confronted by Mr. Trump. Political correctness idols are being destroyed. Opportunity is being created in the path of destruction. One does not need social conservatism to change hearts. One needs the freedom to do the work required to change hearts. Mr. Trump is guarding and protecting freedom.

Christians need to be on the God Train and let the Trump Train clear the tracks.

Christians who respect Mr. Trump are not infatuated by him but rather infatuated by what God can do through them.  They are infatuated by freedom as they are ready and willing to work in a societal rebuilding process for Christ and His Kingdom.