A Recipe For Riots At The RNC 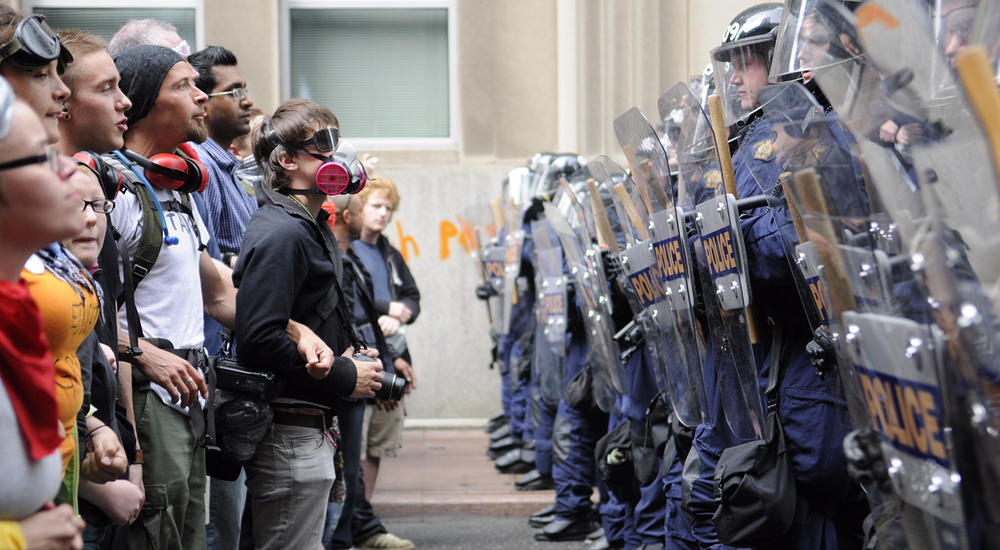 The politicians ruling the City of Cleveland are planning to turn about 3 square miles of the city (buildings, streets, parks, bridges, part of a river) into a gigantic cage fight during the Republican National Convention.  The mayor and city council, Democrats all, are stacking the kindling so that any inevitable spark will ignite a conflagration.  Here is how things stand today, less than 3 weeks before the convention.  You’re not going to believe this.

Rather than simply granting permits in separate venues to the various groups that want to demonstrate at the Convention, the council has established an “event zone,” the infamous 3 square miles noted above.  Into this zone all permitted groups and demonstrators are to be gathered; groups ranging from professional provocateurs like Black Lives Matter to amateur supporters like Bikers For Trump.

Quasi-free speech, of sorts, will be allowed within the zone.  While banning “soap boxes,” tennis balls, tape, string, rope, coolers and whatever, the city will provide a public address system – consisting of a single microphone for all of the groups.  (So much for separating opposing groups within the event zone)  To speak, groups must apply ahead of time for one of the five-minute approved speaking slots.

Parades will also be permitted after approval of another application.  Each successful applicant will be allotted a maximum of 50 minutes along a single designated route over a bridge crossing the Cuyahoga River.  A total of 18 parade permits over a four-day period are to be granted.  There are already 25 applications filed, with more expected.  There are no announced criteria for allocating the five-minute mic times, or the 50-minute parade times.

This is so whacked-out that the ACLU of Ohio is suing the City of Cleveland for violating protesters’ free speech rights with undue restrictions on demonstrations.

Lest you think that maybe the city fathers and mothers aren’t really trying to create a riot, consider the General Police Order issued by the City for the Convention.  One of the more ominous provisions of the Order is that if there is “an active shooter” in the crowd, “under no circumstances” are police officers to interfere.  (Since the Secret Service has declared the Republican National Convention a “gun-free zone,” this problem should not arise.)

Steve Loomis, president of the Cleveland Police Patrolmen’s Association, has said, along with a great many other things, that the Order “is absolutely going to tie our hands,” and that police and convention attenders will be “sitting ducks.”

The City has purchased riot insurance for the Convention.

The obvious explanation for this bizarre program is that a riot will provide vast ammunition to the Democrats and the anti-Trump mainstream media who will find a way to blame Donald Trump for the violence, and to the Republican dump-Trumpsters, who will do the same.

What makes this strategy possible is frustrated leftists who are losing in the realm of public opinion, and thus want literally to drag the fight down into the gutter where they will have a home-court advantage

Of course if the rioting were to become widespread, and jump to other cities, it would provide a handy-dandy rationale for martial law, and the end of the nation as we know it.

Though the Trump campaign has yet to contact me, it looks to me that Trump must get out in front of this thing.  He should immediately and loudly denounce the actions of the City Council and demand proper security for the Convention and the City, and First Amendment rights for all of his supporters and protestors.

There are some battles that can be won only by not engaging the enemy.  For Trump supporters, the streets of Cleveland may be one of them.  Without proper security this is a set-up for a battle that cannot be won in terms of furthering the election of Donald Trump.  Regardless of the outcome on the ground, we (Trump supporters) will lose.  A riot without our participation will be a different matter.

A massive rally somewhere outside of Cleveland, away from the Convention, might be a good alternative.  I plan to suggest this to the Trump campaign organizers when they return my call.  In the meantime, let us pray for God to derail what is obviously a premeditated move against, not just Donald Trump, but our very political system by the enemy of us all.