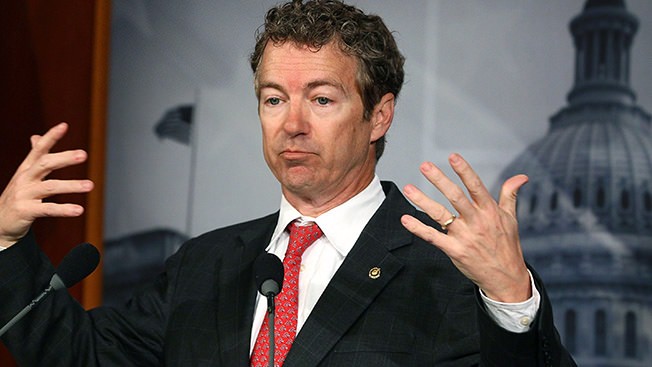 Senator Rand Paul (R-KY) appeared on ABC’s This Week with George Stephanopoulos on Sunday morning to explain his opposition to the Senate version of the GOP healthcare bill. The opposition comes down to a few basic points:

The GOP bill is basically a bail out for insurance companies.

The GOP bill will also have a “death spiral.”

Senator Paul argues that he just wants a bill that makes insurance cheaper and provides MORE options for the American people, not less.

Senator Rand Paul (R-KY): Well, you know, the fundamental flaw of Obamacare was that it added regulations to insurance, mandates, which made insurance more expensive, but then it also told individuals, you know what, if you don’t want to buy now, you can wait and buy it after you’re sick. That still remains, 10 of 12 regulations that add cost to insurance remain under the Republican bill. And we still say you can still by insurance after you’re sick.

If you add those two together, you still get the death spiral. The Republican plan acknowledges that we’re going to still have this death spiral, which is sicker and sicker people in the individual market and the healthy people don’t buy insurance, they acknowledge this by putting over $100 billion of insurance bailout money to try to say, oh we’re going to tamp down prices. We’re going to fix the problem, we’re going to acknowledge the will continue forever and we’re just going to pile taxpayer money into it. That is just not a conservative notion to add a new federal program to bailout insurance progrmas.

George Stephanopoulos: That sounds like a fundamental structural flaw in the program that you’re talking about. So, is there no way you can get to a yes vote?

George Stephanopoulos: What percent is it now?

Rand Paul: But realize that this — just one second — realize that the Obamacare subsidies in this bill are actually greater under the Republican bill than they are under the current Obamacare law. That is not anywhere close to repeal.

George Stephanopoulos: So, you’re a no right now. You’re a no.

Rand Paul: At this point. But I could vote, if we get to impasse, if we go to a bill that is more repeal and less big government programs, yes, I’ll consider partial repeal.

Rand Paul: It means more freedom. It means they have to legalize the sale of inexpensive insurance. Obamacare made it ill legal to buy inexpensive insurance. If I’m a 27-year-old guy, and I don’t want pregnancy coverage, I cannot buy an inexpensive policy. They’ve priced me out of the marketplace. And therefore I don’t buy it at all. And that leads to the whole death spiral of Obamacare.

All of that remains under this. And I’m not voting for something that looks just like Obamacare and still doesn’t fix the fundamental flaw of Obamacare.