Priorities Make Us What We Are 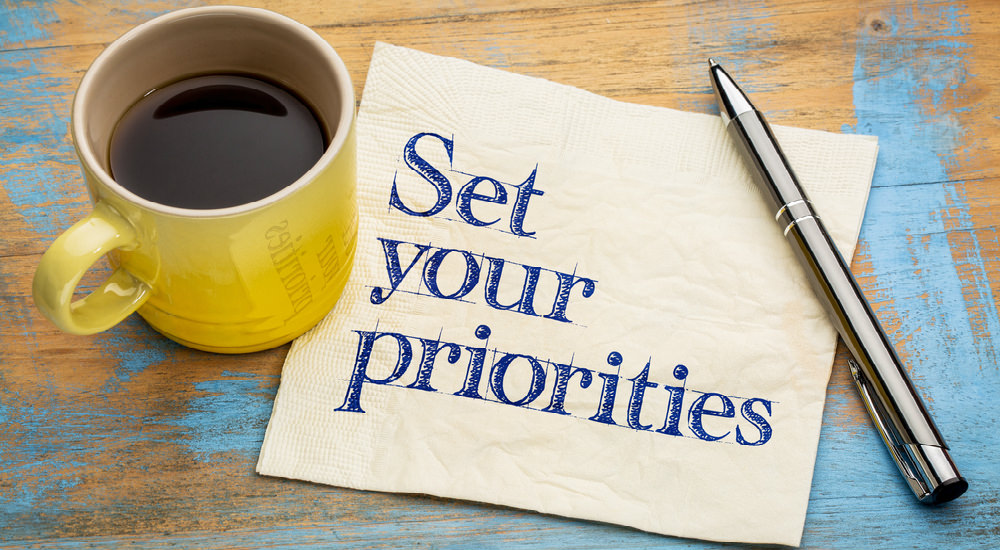 The human animal is a unique species that functions by way of decisions.  To act requires a determination to proceed.  When faced with the pangs of hunger we decide to eat and what to eat. When confronted with the elements we decide to seek shelter and coverings for our bodies. At all times we are making decisions either by conscious effort or subconscious training as when we are driving a car.

Central to this decision making is the assignment of priorities.  The whole decision making process consists of many elements but priorities guide our direction of what we will make of ourselves.  If our priority is good health we will seek information and methods to prevent disease.  We will plan for illnesses and acquire insurance and good medical personnel.  We will avoid conditions that are unsanitary and sources of contamination. Our overall focus will be centered on this priority and our actions will be commensurate.  If our priority is pleasure we will seek out opportunities for entertainment and mostly what makes us “feel” good ( at least temporarily).  It goes from the  choice we make to earn a living to the choice we make in a partner.

Priorities of course shift as we are confronted with different conditions.  A person out of a job spends time looking until a job is found ( if the priority is to work).  A person that is ill focuses on getting well until they are healthy again.  What of the more fundamental priorities that govern our lives.  A person who decides his life is to be spent in the service of others may decide that being a politician is the most effective way to accomplish this priority.  After placing this priority high on his list of his life achievements this drives him to seek what will give him political success.  This means he must become popular and attractive to voters.  Any principles he adapts must mesh with his electability.  If a political party exists which espouses his lower priorities of principles to some extent he aligns with this party and pursues his priority of “public service’ within the party he has found to embrace him.

To continue his career and his priority of “serving others” he must constantly focus and be aware of anything that might enhance or detract from his success.  Every event or action is calculated to mesh with this priority.  When mixed priorities such as pleasure and political success collide you have the phenomena of an Eliot Spitzer or a Bill Clinton undermining their political successes by trying to mesh what is at odds with the voters.  Trying to have your cake and eat it too puts priorities into a collision course that counteracts each other.  You often see this in the political arena especially with the most extreme politicians , the dictators.  They want it all and think the power they have attained gives them the right to whatever pleasure they may seek.  Thus you see the affluence they seek and exhibit.

This phenomena is not exclusive to politicians but is most easily observed watching how they operate and how they end up.  Other people who devote many years of their lives to be successful working in a career may undermine their success by simultaneously pursuing what they deem to be pleasure.  The older executive that pursues a youthful mistress and ends up with a messy divorce is an example.  The older executive that lives in misery with a wife he doesn’t love is another.  The priority of pleasure versus success doesn’t have to be in conflict but when they are not synchronized they become polarizing and self defeating.

People often ask how it is that they have ended up as they are.  Examining the priorities they have set for themselves will reveal how they arrived where they are.  Regardless of circumstances it is priorities that rule.  Many obstacles have been overcome by those who set a priority and worked tirelessly to achieve it.  You see this in sports and business and politics.  Losers who became winners when they stayed with the priority they had set to become successful.

What happens if you set an inappropriate priority?  Suppose you are a politician who wants power and success but ideologically you pursue an avenue that although popular simply is not in sync with reality and you end up disgraced.  The Soviet Union politicians are a perfect example of this.  Although they gained popularity by their adherence to Communist principles, the principles were incompatible with human nature and consequently led to failure.

With America in the position of a country in transition from semi free to less free it is time to look at the priorities of our leaders and ourselves.  Do we want a country where opportunity is ours to achieve or where government officials will decide what opportunities are available and to whom?  The position of our President has become very clear that priorities are the prerogative of government officials and his scoffing at the Tea Party demonstrations further solidifies that claim.   The question every citizen must ask including the President is whether the priorities that are being pursued are in sync with reality or are they illusions of a world that can never be.  If the latter, we are seeking a very formidable enemy in reality and she will not be distorted by irrational human desires.