Our God Given Rights Are UNIVERSAL

It’s an astounding matter to find so many so-called, self-described “conservatives” on social media sites like MeWe and Facebook who do not understand, that the very same rights enumerated and codified in Our Constitution’s Bill of Rights are God Given Rights afforded all men and women.

If any nation has not codified those God-Given Rights and makes a habit of suppressing them, as so many do these days — including supposedly Free World countries like the United Kingdom, along with much of the Third World — this doesn’t mean those rights seek to exist.

God Given Rights are Truisms and have been witnessed in Nature’s Law, since the beginning, and they preexist any legal system and structure and any government. They are UNIVERSAL to all mankind.

Our Founders acknowledged and understood this fact. Our Declaration of Independence clearly states:

“We hold these truths to be self-evident, that all men are created equal, that they are endowed by their Creator with certain unalienable Rights, that among these are Life, Liberty and the pursuit of Happiness. — That to secure these rights, Governments are instituted among Men, deriving their just powers from the consent of the governed”

And Our Founders had to fight to secure those RIGHTS. 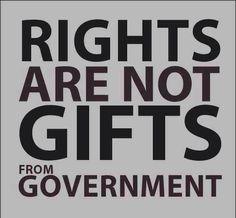 The absence of a legal system that protects these rights in any nation doesn’t mean that all of a sudden these rights no longer exists. It simply means that the nation’s people have somehow failed to secure those rights for their own population.

Everyone has the absolute right to freedom of religion, free speech, freedom of assembly, to keep and bear arms and self-defense, to be secure in one’s home and privacy, habeas corpus, a speedy trial and to face one’s accuser in criminal matters, among other things.

Our God Given Rights are Universal to All Mankind.

And when I see so many on MeWe denying this fact and misrepresenting this statement as seeking One World governance, it exhibits precisely why our nation is suffering such unrest and tumultuous times. This “Conservative” IGNORANCE is just as corrosive and destructive to the Republic and Liberty as the intentional and purposeful efforts of the Democratic Party Communists.

To equate recognizing God Given Rights belong to all men and women with a globalist agenda, especially when speaking of illegal immigration is a non sequitur and lacks a proper understanding that a nation’s sovereignty is derived through its own sovereign individuals, each of which has been endowed by God with these inalienable rights.

If one commits the crime of jumping the U.S. Border illegally, that individual doesn’t lose rights that have long been recognized by most of the Free World. That’s just a plain fact and agreed upon since the very Founding of this nation.

To state or suggest otherwise is revisionist history.

It is this marked Ignorance that makes me almost want to leave all these social media sites and everyone on them to their own devices. Sink or Swim … because I know the Truth and I’m going to make it just fine … with or without them. But the nation is certainly suffering due to the poor level of education and real knowledge on both sides of the political aisle.

America is in deep trouble, even with the improvements seen under President Trump, but half the American people do not have a clue, or they are complacent and apathetic, just as long as they are getting their bread and circuses.