Opinion: Democrats Rejoice when a Child is Shot 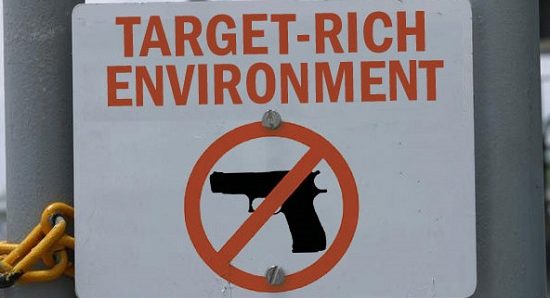 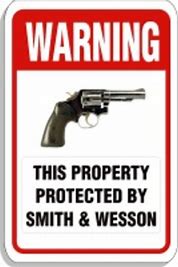 Why is it that conservatives have signs like the first one on our personal and business properties?  Because we know that such a sign detours criminals from bringing their gun into our homes and businesses and killing people.  Why is it that Democrats do not put a sign like the second one on their homes?  Because they know that such signs are an invitation to criminals to come in and shoot the occupants of the home.  Why do Democrats want the “Gun Free Zone” sign on public school property?  Because they know such signs draw criminals with guns who will shoot children.  Why do Democrats want shooters to kill children with guns? So Democrats can promote their ultimate plan of disarming law abiding Americans starting with the mantra of “gun control.”  Why do Democrats want to disarm law abiding citizens of the USA?
To control any people, those people must first be disarmed.  That is why prisoners are not allow to have guns while incarcerated!  Gun control is not about controlling gun violence but about controlling defenseless people (you!) with the threat of gun violence because you are defenseless and the government (gun owner) is not. On the inside, Democrats rejoice at every shooting of every child during school hours.  On the outside they shed a manufactured tear and yell, “GUN CONTROL NOW!”  The key word is control not gun. The subject of the verb, control, is you, not guns.  You are to be controlled, not guns. Logically, guns cannot be controlled because guns are inanimate objects. not entities.  The people with guns and people without guns can be controlled.  The best way to control a person with a gun is for him or her to be confronted by another person with a gun.  People without guns are easily controlled by people with guns.
Guns are to be removed from you so you can be more easily controlled.  For Democrats, murdered children on school grounds are one valued means to that end; nothing more. The Second Amendment is the target of Democrats.  Gun control demands are the first steps in destroying the Second Amendment. No matter how much gun control there is Democrats will want more until law-abiding Americans are disarmed.
Remember, abortion started out as only legal during the first trimester. Now, Democrats are talking about “aborting” children under the age of two because they are not viable.  King Herod was a Democrat.  “Then Herod…slew all the children…from two years old and under….” Matthew 2:16. KJV.  (This is tongue-in-cheek, obviously.)
I will not have a Democrat as a friend.  No Democrat is welcome in my home.  “Do not even eat with such people.”  1 Corinthians 5:11.  “Have nothing to do with them.” Ephesians 5:7.   “Mark those who cause division among you contrary to the doctrine which you have received and avoid them.”  Romans 16:17.  Democrats have declared war on America. I do not aid or abet them. I do not abide (respect) them. I do not tolerate them.
If Democrats cared about America’s children then why do they create and defend the laws which allow the wholesale murder of people like this?

I know the original primary intent of abortion was to keep the population of black people at a minimum in the USA and that has been effective; however, that is offensive and that is sick.  Black, white, yellow, brown, or red skin, in or out of school, in or out of the womb — the killing of children for political, social or financial gain is evil. http://time.com/4081760/margaret-sanger-history-eugenics/

Putting our children in schools where they are unprotected from armed intruders is child-endangerment.  Democrats love doing it because dead kids on school property fosters their ultimate goal of destroying the Second Amendment.  How long will you tolerate this????

I make no claim that anyone else agrees with me.

PS:  “…tongue-in-cheek (is a) figure of speech…used to imply that a statement…is not seriously intended, and it should not be taken at face value.The phrase was originally meant to (and is used here to) express contempt.”    https://en.wikipedia.org/wiki/Tongue-in-cheek   (Parenthesis mine, Joda Collins)

by Rev. Joda Collins.  This article first appeared at https://ppsimmons.blogspot.com/2018/02/opinion-democrats-rejoice-when-child-is.html on February 25, 2018