The Scandals of Obama’s “Scandal-Free” Presidency 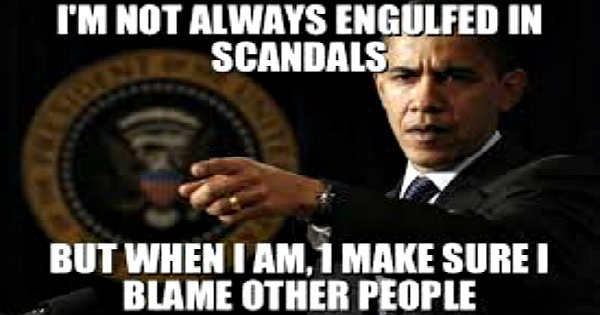 In the last few days the Dems have picked up the drumbeat expressed by Valerie Jarrett, Josh Earnest, Jay Carney, Alyson Camerota, Tom Brokaw, and others.  Like all crap sandwiches offered by political hacks, the latest one is that Obama’s tenure has been “scandal-free”. Repetition does not create reality out of delusion.

To board Obama’s fictional Scandal-Free Express, one must ignore:

The jamming of Obamacare down our throats in a flood of lies and deception (at a cost of $1.7 TRILLION and rapidly climbing).

The hideous portrayal of legitimate questions surrounding Obama’s zealously guarded citizenship (and whether or not he was ever constitutionally eligible for office) as a race-bating personal attack on anyone raising questions.

Characterizing of Nidal Malik Hasan’s murdering of 13 servicemen and attempted murder of 35 others as “Workplace Violence”.

The nurturing of a relatively pacified Iraq into a murderous anarchy.  Or the way the administration purposely allowed ISIS to grow in order to pressure Assad in Syria. AND how the strategy blew up in Obama’s face when Russia entered the fray.

The disgraceful “Pigford” slush fund that ballooned under Eric Holder’s watchful eye from a questionable $130 million judgment to over $4.5 BILLION (that’s 4,500 million of your taxpayer dollars) for what’s been described as a fraud from jump street.

Maybe the millions of dollars paid by Obama to sanctuary cities in support their continued violation of federal immigration law constitutes a “scandal”?

Perhaps (imitating Bush arming the Taliban Vs. Russians in Afghanistan) Obama’s smuggling of weapons to ISIS in Libia then blaming the resulting Benghazi fiasco on an obscure video was a scandal?

The flooding of arms across the Mexican border in Operation Fast and Furious?

Or Solyndra and a half-dozen other green energy cronies and Obama suck-ups that the administration flooded with American taxpayer money only to watch them play golf all the way to bankruptcy court?

Eh, I don’t know, maybe Obama’s flagrant targeting of industries he deemed unlikable in the exposed, discredited and failed Operation Chokepoint, was a scandal.  Coal…

Perhaps the disgraceful butt-kissing Obama extended to Iran to secure a worthless PR victory and erect a false legacy in the form of the Iran nuclear deal?  Still not a scandal?

Perhaps Obama paying Iran pallets of illicit foreign currency to thwart U.S. currency laws and laughably TRYING to claim it was all an unfortunate coincidence in the timing.

Perhaps the release of tens of thousands of illegal aliens (including hundreds of convicted rapists and murderers) on the general public was a scandal? No?

How about Obama’s personal praise for Bowe Bergdahl after he swapped four known terrorists for the deserter?  (In an aside, one wonders how much foreign currency we secretly paid for the return of THAT sack of upstanding citizenship?)

I guess Lois Lerner’s political targeting by the IRS of groups with which they disagree wasn’t a scandal!  Or the DOJ acting as an enforcer for global warming profiteers by targeting big oil under the RICO organized crime statutes?

Surely, committing espionage (at least) by knowingly swappingTop Secret information with his Secretary of State over unsecured email servers was a scandal?

The “unscandal” we’re hearing so much about is probably the surreptitious horse-trade between Loretta Lynch and B.J. Clinton accidently discovered.  (How many went unseen? Did Lynch play hardball and demand Scalia’s seat?)

The Unscandal they probably mean is the one where Obama is active meddling in the Isreali election process only to later whine about possible Russian involvement in our own?

Maybe it’s too late for a scandal.  Is there insufficient sand in his ‘big-shot’ timer for his use of the U.N. to stab Isreal in the back on his way out the door to qualify as a scandal?

Maybe the same applies to Obama’s approval to ship enough uranium to Iran to build 10 nuclear bombs. It’s just too late to be scandalous.

Scandal-Free??? More like Scandal Free-Fall. This “Blame-America-First” president turns on the fan as he heads out the door and simultaneously pats himself on the back.

The happiest man on the planet HAS to be the peanut farmer.  Jimmy Carter is no longer in danger of being the worst American President in history. Obama deftly grabbed the baton as he flew past our previous bottom-dweller on his race to the basement.

I tried to watch his farewell address. I really did. But how many delusional whoppers? How many self-congratulatory boasts can one stomach? It turns out that his knee-pad acolytes can handle over seventy! That’s how many times our beloved liar-in-chief used his personal pronoun. I left the love-fest early. Sue me.