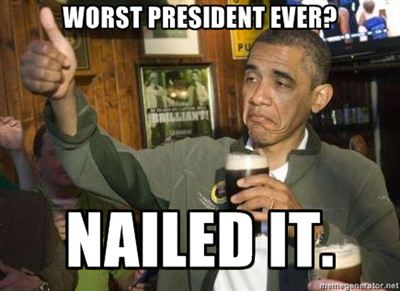 Note, this is the 50th article i’ve posted on this website. The other articles go into more detail about everything listed in this article and more.

Gross Domestic Product (GDP) is the monetary value of all the finished goods and services produced within a country’s borders in a specific time period. A 3 per cent annual GDP growth rate is considered by most economists as the minimum annual growth rate necessary to meet the minimum needs of the expanding U.S. population. The U.S. has NOT reached a 3% Annual GDP growth rate any year during the Obama Administration’s time in office.

Our National debt will be about 20 trillion dollars when Obama leaves office. This is more than double what it was when he was sworn in as president in January 2008. Our national debt has increased more during the Obama Administration than it has under EVERY previous president combined, with less than half of this increase due to foreign wars and our fight against terrorism. It is even more concerning when you consider that our Government managed to accumulate this much debt, and continues to add to it while the national Interest rates have been at historical lows for years. Imagine what our National Debt annual growth rate will be if our government continues to operate like the Obama administration has, as interest rates increase.

The United States 2015 year end National Debt as a percent of the U.S.2015 GDP was 104.17 percent (total GDP divided by total National Debt). Most economists believe that a national debt that exceeds a countries annual GDP is an almost insurmountable economic crisis, especially if that county’s’ GDP growth is anemic like ours is now. Both of these economic measurements indicate the U.S. economy will be even weaker on December 31, 2016. An interesting side note to this situation is that at one point during his presidency Obama and key members of his staff were bragging to the media that, “we are reducing the deficit at the fastest rate since the end of WWII”, and no one called them out on it!

One in five households in America does not have a single person with a job.

One in six males aged 18 to 34 in America are incarcerated or living with relative’s because they are unemployed. The number is even higher among non-white males.

Home ownership is at a 51 year low. Even with historically low interest rates since 2005 the American dream of owning your own home is out of reach for an increasing number of people.

Thirteen million more Americans are on food stamps than when Obama was sworn in to his first term as President.

Eight million more Americans are living in poverty than when Obama was sworn in to his first term as President.

Overall the Obama Administration has delivered the worst economic recovery since 1940.

The Democrats had a veto proof majority in both houses of congress during President Bush’s last two years of his last term in office. Obama also had a majority in both houses during his first two years in office. Even with this advantage the only major thing Obama and the Democrats managed to accomplish in that ten year period was “Obamacare”, which is in the final stage of its designed collapse.

The number of veterans who are homeless, hungry and dying due to a lack of proper medical care is increasing while the Obama administration spent hundreds of millions of dollars participating in international “man-made” climate change meetings, including the recent Paris meeting, where Obama pledged three billion U.S. dollars to help other countries fight “man-made” climate change.

In addition to wasting all this money and effort to combat what is called  “man-made” climate change (with more scientist beginning to question its existence), the U.S also gives economic aid to 96% of the other countries in the world. Some of it is labeled humanitarian aid but a lot of it is military aid.

Race relations are worse than they have been in remembered history. And they are worse in a different way. It is no longer non-violent protest over discrimination like it was in the 60’s. Now non-violent protests are being replaced with violent and destructive protests organized and led by paid anarchist with unreasonable and irrational demands.

Anti-Police violence is at an all-time high in America. Six police officers were shot in six days in Georgia, two fatally.

Gun violence is at record high rates in cities like Chicago, with some of the most restrictive guns laws in America. On average someone is shot in Chicago every two hours, yet Obama stood before TV cameras at a White House press conference and said that it is a fact that the cities with the most restrictive gun regulations have the lowest gun related crime rates.

International relations have been an absolute disaster under the Obama Administration. Benghazi, the current horrible situation in Syria, ISIS, Russia’s aggressive military actions in other countries, and China’s aggressive military build-up including building a man-made, high tech island military base are just a few examples of how dangerous our world has become during Obama’s two terms in office.

Obviously this article is not all-inclusive regarding the Obama legacy. However just what is listed here proves how inept and destructive the Obama administration has been.

What is still amazing, and terrifying me is the number of people in America who not only refuse to acknowledge how close America is to being destroyed, they are literally obsessed with keeping us on this path of destruction!