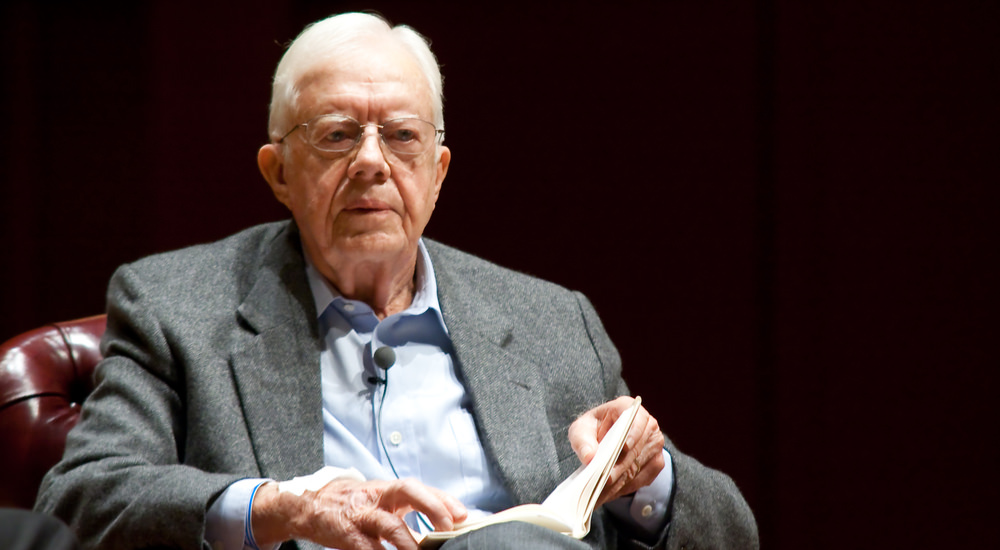 As America begins a new year with an administration that is actually standing for the American people, what do we expect for the next 12 months?  This question is asked each year, but this is the first time I can remember the hope and optimism of this magnitude was in 1980 when Ronald Reagan became our 40th President.  I remember those days.  Carter had destroyed the economy, military and America’s respect on the world scene. Reagan came in kicking butt and taking names.  He got things done.  He was anti-big government and pro-people.  Donald J Trump entered office in the same manner.  Reagan had run the State of California very well, left it with a $6 billion surplus.

We, the American people, were ready for a President with a back bone.  Carter did not have the guts to stand up for America.  The Iranian hostage crisis was, I believe, the downfall of Carter.  He let third world countries walk all over America and rarely retaliated.  His hatred towards Israel and refusal to accept assistance from Israel in freeing the Americans held hostage by the ‘religion of peace’ was a major red flag for me.  I had been a Democrat up to that point.  Carter cured me of liberalism!  His economic policies were just as bad as FDR’s were.  They only made the whole problem worse.  Inflation was soaring as was interest rates.  The economy came to a grinding halt.  Reagan gave us hope.  He had a Democrat Congress and Senate, yet he managed to get tax reform done that spike the economy for a two-decade run.  Ever notice that the tax cuts are always removing the taxes demanded by the Democrats over the last couple decades.  Even Calvin Coolidge cut taxes in the 1920’s that along with common sense economics kicked off the roaring 20’s. 1

Reagan cut taxes AND regulations2 in his first term and the Democrats did the same thing they are doing today, crying Armageddon! For some reason the economists then and now can’t grasp the concept of low taxes and regulation actually moves the economy in the right direction. Economists disagreed over the achievements of Reaganomics. Tax cuts plus increased military spending would cost the federal government trillions of dollars. Reagan advocated paying for these expenses by slashing government programs. In the end, the Congress approved his tax and defense plans, but refused to make any deep cuts to the welfare state. 3  Each time taxes are cut for businesses and the people, government gets more money.  It has happened every time, always will.  Democrats actually believe, for some reason, that your paycheck is theirs and they are being nice to let you keep any of it.  Concerning the recent tax reform package just passed by Congress the Democrats are claiming almost a national security attack!  Senator Bernie Sanders (I-Vt.), who nearly won the Democratic presidential nomination last year, described the tax bill this way: “What we are seeing today, in an unprecedented way, is the looting of the federal Treasury.” 4 Senator Elizabeth Warren (D-Mass.) echoed her fellow Democrats. “The bill that the Republicans jammed through the senate tonight isn’t tax reform. It’s a heist. Let’s call this out for what it is: Government for sale.” 5 Why is it theft for the middle class to keep more of their money?  We do realize that there are expenses in keeping us safe and running the government, but we are also spending billions on foreign aid to countries that hate us.

We saw with the election of Donald Trump that most if not all of our trade deals benefitted the other party more than us and usually the US citizen got the short end of the stick. Dumping the Paris Agreement saved America billions of dollars.  All of these world organizations, UN, UNESCO, NATO demand that America fund all their idiocy.  Most of the budget for the Paris Accord would fall into the lap of the American taxpayer. Examples of what we DON”T have to spend: Yemen has promised a whopping 1 percent cut in greenhouse gas emissions as part of the global Paris climate agreement.

North Korea, meanwhile, has said its pollution will double by 2030 compared with 2000 levels — but only if the rest of the world writes a sizable check. Otherwise, its emissions will rise even further.

Peru says it can cut emissions by 30 percent by 2030 compared with its “business as usual” projections, though that would be a net pollution increase of 22 percent and is contingent on billions of dollars in funding.

India, Iran, South Sudan, Niger, the Central African Republic, Cuba, Egypt, Paraguay and a host of other countries have similar demands: Pay up, or else they will have to keep polluting.

When President Trump pulled out of the Paris climate accord last week, his critics — including former President Barack Obama — said he was turning his back on the future and joining only Syria and Nicaragua in refusing to take part. 6

We have seen the positive effects on the economy ever since the day Trump was elected. The Stock Market has had as of October of 2017 47 record highs! 7 Today many sectors of the market are at all time highs: Other major market indexes were on course to deliver solid gains. The Dow Jones industrial average is on pace for a gain of 25.2 percent. The 30-company average set 70 all-time highs as it sped from just under 20,000 points to past the 24,000 mark.

The Nasdaq composite is headed for a 28.9 percent gain. The tech-heavy index blew past the 6,000-point mark for the first time in April.

Small-company stocks, which trounced the rest of the market in 2016, got a boost this year as investors bet that the companies would be big beneficiaries of a corporate tax cut bill. The Russell 2000 index of smaller-company stocks is on course for a 13.8 percent gain.

The market’s gains have been broad, with seven of the 11 sectors in the S&P 500 closing in on double-digit gains, led by technology, which is up nearly 39 percent. Only energy stocks and phone companies are lagging. 8

The US Manufacturing Index soared to a 33 year high in this period which were the best numbers since 1983 under President Reagan.

President Trump added 298,000 jobs in his first month alone (after President Obama said jobs were not coming back!).

Illegal immigration is down 67% since President Trump’s Inauguration.

NATO announced Allied spending is up $10 Billion because of President Trump.

After being nominated by President Trump, Constitutionalist Judge Neil Gorsuch was confirmed and sworn in as  Supreme Court Justice in early April.9