When the GOP Leads – there is No Conservative Party 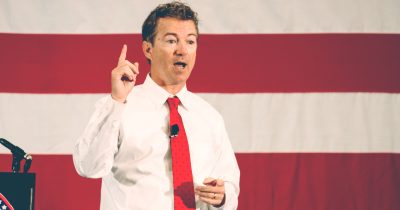 Thursday night Senator Rand Paul (R-KY) did his very best to kill the very bad budget deal, but sadly the effort was for naught.

It wasn’t useless though, as his speech before the Senate reminded the nation of how far the Republican Party has fallen. No longer the party of fiscal conservatism, the GOP has embraced the fast and loose spending culture of the socialist left. One line in particular from the Senator’s speech will endure long after this weekend…

You see, opposition seems to bring people together, and they know what they’re not for. But then they get in power and they decide, we’re just going to spend that money too. We’re going to send that money to our friends this time.

The hypocrisy hangs in the air and chokes anyone with a sense of decency or intellectual honesty.

The right cries out, ‘Our military is hollowed out!‘ Even though military spending more than doubled since 2001.

The left is no better. Democrats don’t oppose military money as long as they can get some for themselves… for their pet causes.

The dirty little secret is that, by and large, both parties don’t care about the debt.

The spending bill is 700 pages, and there will be no amendments.

The debate, although it’s somewhat inside baseball that we’re having here, is over me having a 15-minute debate. And they say, ‘Woe is me! If you get one, everybody will want an amendment.’

Well, that would be called debate.

That would be called an open process.

That would be called concern for your country, enough to take a few minutes.

And so they clamor. We’ve been sitting around all day. It’s not like we’ve had 100 amendments today, we’re all worn out and can’t do one more. We’re going to have zero amendments. Zero, goose egg, no amendments.

Take it or leave it. You know what? I’m going to leave it. I didn’t come up here for this. I didn’t leave my family throughout the week and travel up here to be a part of something that is so much inertia, and so much status quo, that they’re not leading the country. They’re just following along, and it’s a big ball rolling down a hill grabbing up your dollars as the boulder rolls down the hill, it gets bigger and bigger, it’s going to crush us.

But nobody has the guts to stand up and say no.

We’re supposed to pass each individual bill, and what would happen when we pass the bills, they would go through committee and each committee would look and see, well, this spending seems to be working. We’re getting a great result, and we want some more next year. And this spending appears to be, have been put in a closet and lit on fire, and so next year we’re not giving that person who put the $10 million in the closet and lit it on fire, we’re not going to give them any money.

Guess what? That doesn’t happen. So people keep putting your money in a closet and lighting it on fire.

Reposted with Permission from Godfather Politics…