The Mythology of the Greenhouse Effect and Climate Change 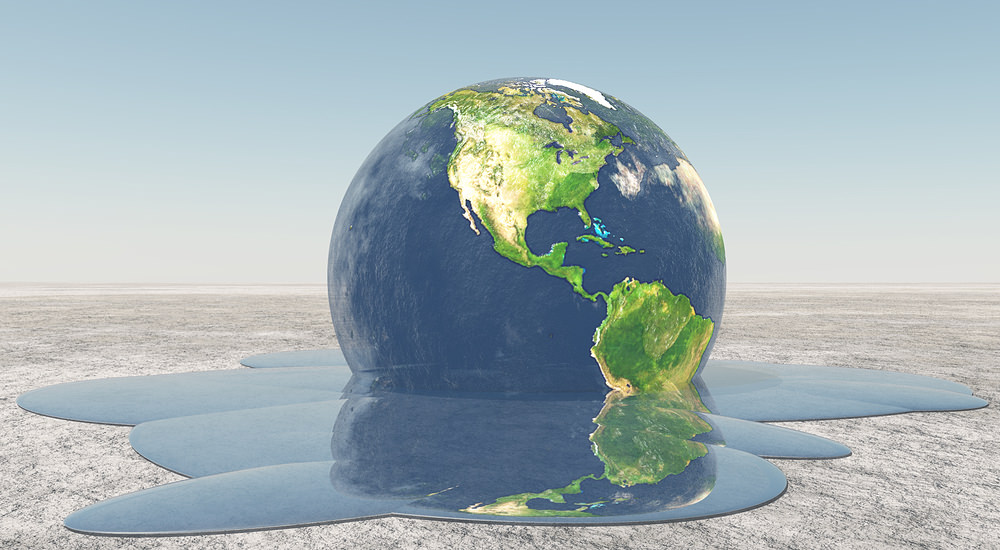 Recently, I received an email from someone who claimed, “The possible dramatic effect of a 35% increase in CO2, since 1958, cannot be denied”.

My response to him was that he was being influenced by the specious nature of the so-called “greenhouse effect”.

In the real world, climate change is far more complex than just “more CO2 in the atmosphere = warmer climate.”

Let’s examine the claim, “The possible dramatic effect of a 35% increase in CO2, since 1958, cannot be denied”

Well, yes, it can be denied.

The chart below explains why a 35% (or even a 3500%) increase in atmospheric CO2 from current levels might easily have no real impact on global climate (depends on where CO2 is when you start adding CO2 for your comparison). 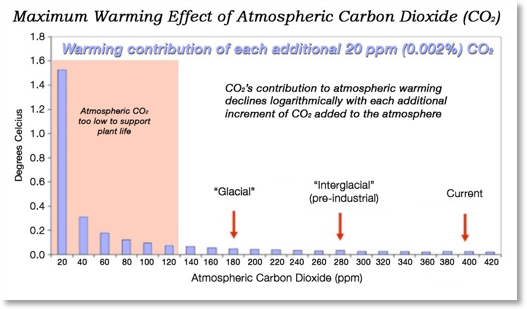 How high do you think those bars will be for CO2 levels of 800 and beyond? They are already over-represented for illustration. As CO2 in the atmosphere increases, the warming contribution approaches zero (though it will never reach zero).

An analogy might help to better understand the chart above.

Suppose there were a large fireplace with lots of kindling and some dried papers crumpled up within the kindling. Having a potential to warm, the paper and kindling represent CO2 in the atmosphere .

Take a box of wooden matches. These matches represent outgoing IR radiation because each match has the potential to ignite (warm) some kindling and paper (atmospheric CO2).

Light one of the matches and toss it into the fireplace. The kindling will ignite and the fire will produce considerable new heat from the ambient temperature. This is illustrated by the first bar in the chart above.

Keep lighting new matches (representing more outbound IR) and tossing them into the fireplace, igniting paper and kindling that haven’t yet burned. More heat will be created, but proportionately not as much new heat will be created as was created by the preceding match.

Continue lighting matches and tossing them into the fireplace. Each new match will continue to add some heat, but the new heat will add proportionately less heat to the total heat than that added by the previous match because the fire continues to grow making each additional match’s contribution a smaller proportion of the heat being produced. This is represented by each successive bar of the above chart being smaller than the previous.

Let’s now consider the claim that a dramatic increase in atmospheric CO2 will have a “dramatic effect” on global temperature.

Using a single data source to create two overlapping 100-year increments since the beginning of the industrial age, let’s examine whether the Greenhouse Effect Theory really delivers as promised.

For one of the hundred-year ranges, I’ve chosen 1858 to 1958 because the year 1958 was referenced in the original statement claiming a “dramatic effect” from CO2 added after 1958.

To capture the “after 1958” period, I’ve chosen the second hundred-year range to be 1913 to 2013, with 45 years overlapping the first hundred-year range. I used 2013 because it is the most recent date for which the dataset I’m using has both temperature and atmospheric CO2 concentration needed for the example.

I’m using 2013’s average global temperature as the basis (the zero) and showing deviations (anomalies) from the 2013 basis for other years.

This example dispels the notion that changes in atmospheric CO2 are the sole determinant of a “possible dramatic effect” on climate (specifically, global temperature).

Lacking a clear understanding of natural climate change, any effort to sell the narrative that humans are responsible for “unprecedented”, “catastrophic”, or even “any discernible” climate change is presumptive and certainly not scientific.

I should think that would be elementary, but apparently not to those peddling the human-caused-global-warming narrative.