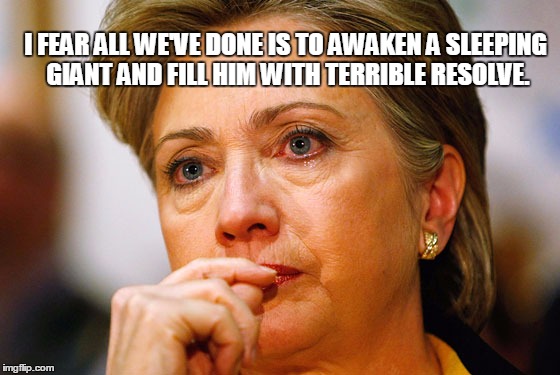 In case you haven’t noticed, America is in the middle of some historic times right now.  The 2016 Presidential election cycle has left our nation just as divided when the Civil War (otherwise known as the “War Between The States”) broke out.  Right now you’re probably saying,”really Keith”, the civil war?  But stop and think about it for a minute and put things in perspective.  Families are divided over the two candidates, neither one of which is a “prime” choice”.  You could even describe it as David versus Goliath, with Hillary Clinton representing everything wrong with government, and Donald Trump representing the average American citizen, although rather crudely.

Face it people, we, yes we gave birth to Donald Trump through our complete disdain of the establishment and the frustration born from the silence of those whom we elected to office.  America truly is a unique country, one where individual freedoms are experienced at a level unlike any other nation in this world allows.  This is also what is leading to our demise and the death of a great nation.  I read somewhere where the average life span of a country is around 300 years (give or take) and we are at 240 years old.  Years of creeping liberalism with pangs of socialism, allowed by each and every one of us, has eroded the very foundation our founding fathers poured in 1776.

I know that words have meaning, but so do actions and non-actions.  While Trump may have used extremely inappropriate words while behind closed doors, the actions of another individual involved in that conversation have set the political world on fire.  On the other side of the isle, did you know that Hillary also had a “collapse of words” this weekend as well?  What Donald said in private with Billy Bush, who is now experiencing repercussions for his actions, is no different then what is heard in locker rooms, porno movies, sex magazines and the selling of sex through television shows which highlight the irresponsible antics of so-called stars.  What is different, is that people choose to get upset over a private conversation on a bus more than they do over crap that takes place on a daily basis.  Please don’t get me wrong, I am not condoning what was said in that conversation, just the hypocrisy of those doing the condemning.

I may not be the biggest fan of Mr. Trump, and all of you know that Cruz was my man, but he is the modern day “David” of the biblical story that all of us know.  He represents people from the white collar, blue collar and “no” collar spectrum of Americans.  In contrast, Hillary represents everything that is wrong with Washington and the political elite.  She represents that which millions of us are fed up with, the complete and utter disdain of the American citizen.  Hell, she even said so this weekend when it came out that she had a “hard time” associating with the middle class, and was heard commenting that she had two different faces, one for the political class, and one for the voter class. What more do you need in deciding the right thing to do?  As I commented before, we are at a turning point in this country that will determine whether she survives as founded or will she become some perverted version of liberal ideology that gives birth to a new socialism that sides with that of Europe and the United Nations.

When our fore fathers set out to pull away from England and the rule of King George, they did so with full knowledge that their actions were in essence signing their death warrant.  In fact many of them did lose their life in the subsequent birthing of America.  Internal strife is nothing new to our country and it certainly won’t be the last that we experience.  But what is certain is the fact the fact that this election is one that is being ran by the American people, not the political class.  Another certainty is the fact that the main stream media has chosen sides against the American people.  One only needs to look at the daily bias seen on every news channel and how they slobber at the ability to raise Hillary and slam Trump.  I wonder what Jefferson, Hancock, Franklin and the others would say about the state of affairs their great nation is experiencing at this point in time.  I think maybe that they would be asking, “When is the revolution starting”?

I love history and every facet of it and we are most certainly making history during this election cycle.  I listen to the pendants and they seem to be running scared because life as they have known it is being challenged.  And I listen to the “real life” side of life as represented by Trump, and I say real life side simply because people from across the spectrum are on his side.  He talks like an average American, and yes he has his faults just like the rest of us, but are those faults enough to cancel his run for President?  I don’t think so, simply because the American people are tired of politics as usual.

We are tired of the low information voters voting themselves benefits at our expense.  We are tired of politicians ignoring our pleas for responsible laws to protect our nation and her citizens.  We are tired of working hard and having nothing to show for it.  And we are tired of being taken for granted as is witnessed by both political parties.

In essence, our political system has awakened a sleeping giant, much as the Japanese did during WWII.  The big question is this:  “Are the American people ready to back up their beliefs?”