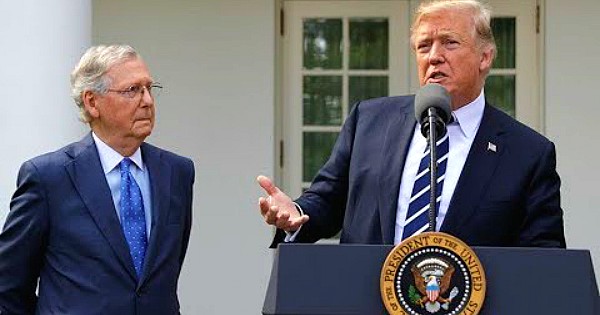 There’s something odd going on in the Republican Party. All of the sudden, Mitch McConnell appears to be leading the establishment wing of the Party toward Trump.

This is very strange indeed, for nary a kind, or even civil word has been said of the President lo these last several months by any the lords and ladies of the ruling class.

Now, the midterm elections are just over a year away. Historically the mushy moderates all start moving right like clock work, ala John McCain, attempting to convince (lie to) voters of their conservative bona fides – voters who have paid scant attention between the last election and this.

But it seems to be starting a bit early. And this may be due, at least in part, to republican internal polling – something of which we commoners in the general population will never be privy.

We hear constantly of how unpopular Trump is and that only his hardcore base is continuing to stand by him. Yet establishment Republicans are far less popular than Trump. And I’m guessing the latest batch of internal polling tells them so.

Then there is growing concern that Mitch’s head may be on the chopping block as Senate Majority leader. What conservative support he ever had has evaporated and no amount of sloganeering may save him. I believe he may have finally figured this out.

In it they describe a little known Senate tradition called “blue slip – based on the century-old practice of home-state senators indicating approval or disapproval of proposed judges from their state via a blue piece of paper.” It’s not one of the Senate’s vaunted rules, that Senators like McCain place above the law, and according to NYMag, the tradition is “not all that hallowed.”

Prior to Patrick ‘Leaky’ Leahy and Charles Grassley, “only one Judiciary Committee chairman had followed a strict rule of letting one senator veto judicial nominees from his or her state; others gave some deference to home-state senators, but in varying degrees.”

McConnell is evidently ending the “blue slip” tradition. According to Mitch, “The majority — that is, Republicans — will treat a blue slip ‘as simply notification of how you’re going to vote, not as an opportunity to blackball.’”

This is a major shift away from the go-along to get-along Republican Senate we’ve come to know and despise. And more interesting, and telling, is that McConnell, not Judiciary Committee Chairman Grassley, is taking the lead.

Don’t get me wrong. I think, for whatever the reason, this is great news, but McConnell would never do something like this knowing he and his squishy brethren maintain the upper hand versus Trump.

To add to this, just Monday, we saw the President give a joint presser with Mitch in the White House Rose Garden. Trump described his relationship with McConnell as “better than ever.”

“We’ve been friends for a long time,” Trump said at a Rose Garden press conference following his meeting with McConnell, with whom he had a public falling out this summer. “We’re fighting for big tax cuts. … My relationship with this gentleman has been outstanding.” He added that they were also working on a repeal and replace proposal for early next year.

Then it was Mitchy’s turn at the mic. “We have the same agenda. … We talk all of the time,” said McConnell, who said their meeting also included discussions about judicial appointments and additional hurricane relief funding. “We are together totally on this agenda to move America forward.”

These revelations don’t change my opinion of McConnell. Mitch is still a snake in the grass who will turn on the President the second his pollsters tell him it’s safe to do so. But for now, if he can faint playing nice with Trump and actually accomplish something positive, we’ll all be better for it. Then we can dump him.