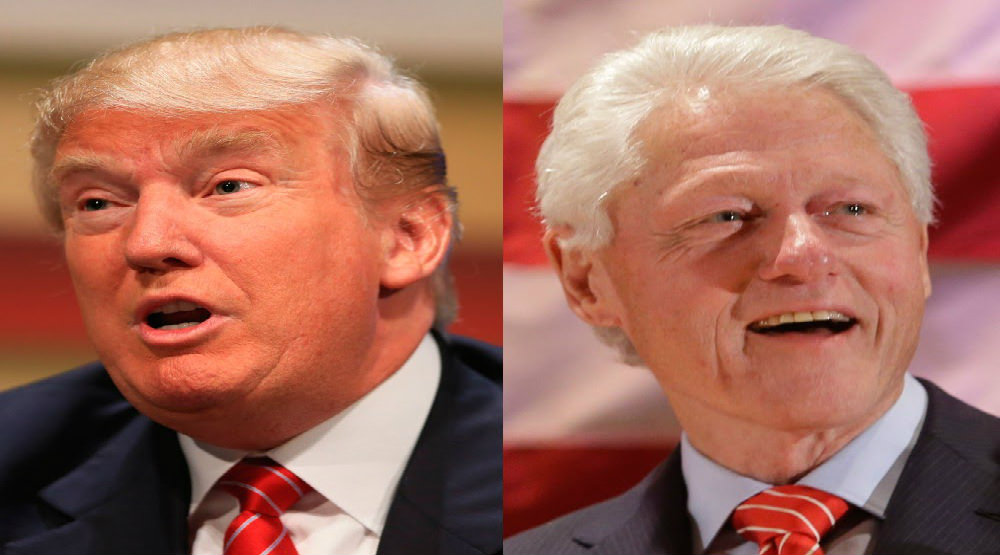 The Democrat media is in character assassination mode smearing Trump in their efforts to distract from proof of Hillary’s corruption.  The Party of Perversion being ‘shocked’ by Trump is the farce of the decade.

This leftwing campaign by the Democrat media is meant to discourage you from voting for Trump by making false accusations.  What it should do is light a fire of righteous wrath in your soul.  As Wikileaks unloads proof of corruption on the part of the Clinton Crime Family and their anti-American agenda, the drive-by media keeps liberal knuckleheads distracted by dredging up women paid to smear Trump as a molester.  They paint Trump as the devil and Hillary and Bill as saints.

This is why, in the second debate, Anderson Cooper posed the question to Trump;

“For the record, are you saying that what you said on the bus 11 years ago, that you did not kiss women without consent or grope women?”

Trump denied it and said it was all talk.  It’s the same set up as George Stephanopoulos questioning Romney about denying women birth control.  Another scandal manufactured by the Democrat media in servitude to Obama and Hillary.  It is a galactic joke in America that liberals are so dim that they fall for this every single time.  Once again Lincoln’s proverb is proven true –you can fool some of the people all of the time.  It just proves that people who remain liberals do so because they don’t learn anything, but people who learn become conservatives.

Clinton, whose rise and maintaining of power includes a body count of some fifty people either outright murdered or died in mysterious circumstances, including JFK, Jr. and SC Justice Antonin Scalia.  Wikileaks has revealed emails implicating Podesta and the Clintons in Scalia’s death to pave the way for Democrats to get a fifth liberal on the court and begin dismantling the Bill of Rights.  Meanwhile, Millennials are engrossed in the claims of women who have, after decades, miraculously appeared to claim Trump molested them exactly as predicted following the second debate.

That this tape was held until this point to sabotage Trump’s campaign is the same as the media holding Obama’s tape of him saying he would destroy the coal industry and make electricity prices skyrocket until it was too late.  On O’Reilly’s Factor, Bernie Goldberg confuses clear evidence with false accusations saying that he believes what women say about Bill Clinton because of his reputation, and he also believes these women because of Trump’s reputation.  The Donald was known as a playboy, not about having women come out claiming he molested them repeatedly over the years like Bill Clinton.  They all came out today after the set-up.  Bernie has always been one of the NeverTrumpers and they need to grow a brain same as liberals.  The sins of Donald Trump as a celebrated entertainer are insignificant next to the crimes of Hillary and Bill Clinton.

Hillary says “Honest Abe” was as two-faced as she

A fighter, not a saint