Last Gasp of the Republic? 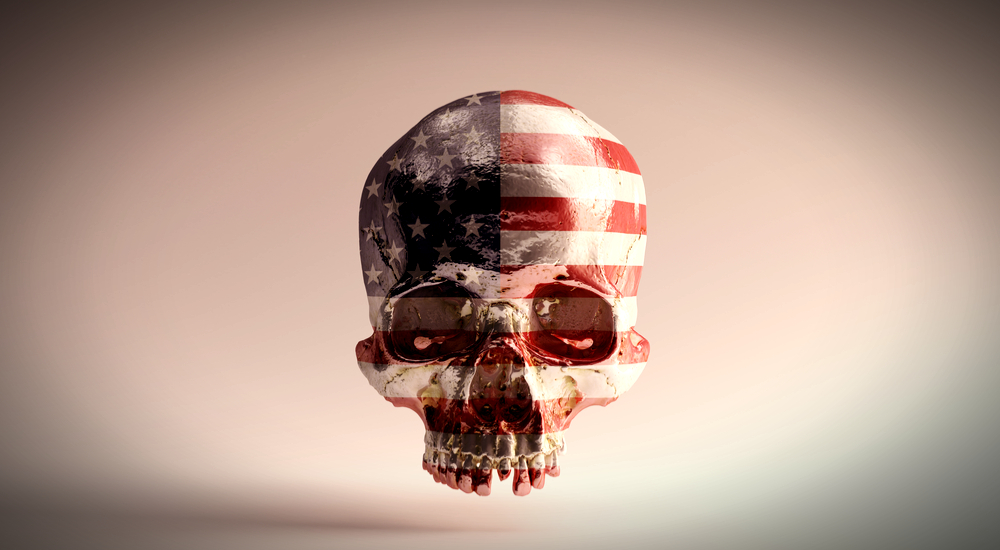 Half of America has embraced Satanism.

Democrats have become the party of fascists, communists, and Nazis working to overthrow the Constitution and remake America into their socialist banana republic toilet like Venezuela.

How do we overcome their twisted lies and educate those who have been duped?

Democrats Will Never Allow Us To Build A Wall – It Would Destroy The Drug Cartels’ Businesses!

Democrats declare a border wall and separating children from adult invaders to be “immoral,” then endorses killing babies after they are born.  The left has taken over America’s education to indoctrinate our children into their hateful ideology because good men did nothing.  Christians listened to the world to be silent rather than speak out on behalf of Christ and this is what America has come to.  The left has taken over our government, our schools, and our entertainment to spew their message of corruption as if it was righteousness.  None of what Democrats say is true, and only half of Republicans speak the truth.  We can’t even be certain that the man who stepped up to stand for America is truly doing so and not just making a show.  Democrats tax the rich which leaves the people poorer.  They spend our money on their imported parasites giving them welfare to vote.  They tax the working man exorbitantly in their states to line their own pockets, then expect the federal government to give their people tax breaks and make the rest of the country pay for their shortage.

The left accuses Trump of just being a reality show fake messing with their transformation of America.  President Trump has been the greatest fighter for conservative Christianity since Reagan and Gingrich.  But he is still being hobbled by the swamp rats in Washington.  All of the Democrats and half of Republicans still work against him.  The elites want to rule, and Trump is in their way.  But, as we found with Jeff Sessions who sabotaged Trump’s Department of Justice, it is possible there are more wolves in sheep’s clothing than we thought.  Why is he not investigating Obama and Hillary?  Why is he allowing Mueller to take down so many of his supporters?  Why has he allowed ObamaCare to remain the law of the land?  And why hasn’t he forced the government to build the wall for which they all claim they voted?

Is Trump really a Trojan Horse like Sessions?  Is he just getting Christian Americans riled up to root out the staunchest conservatives?  Remember the lessons of “Captain America: Winter Soldier” in which Hydra infiltrated the leadership of S.H.I.E.L.D. to bring it down from within.  That evil infiltrates what is good and corrupts it from within is how great empires, nations, and cultures have been destroyed throughout history.  They use their insider power to find those who stand for righteousness and create lies by which to destroy them.  This is just supposition of American’s worst fears.  Pray that this cannot be the case as Donald Trump has fought tooth and nail against the forces of darkness and done so brilliantly!

Democrats only support a wall they can vote for and not fund or build something ineffective.  They care nothing for the people who are being hurt by their importing cheap labor, criminals, and parasites.  The few refugees who truly need aid are lost in the shuffle of criminals and communist invaders.  90% of them want to impose socialism on America.  Every socialist regime in history has tyrannized and overthrown good people by exterminating their opposition.  They start by manufacturing lies through false allegations and innuendo until they can perform a coup.  The first thing they do is seize all the wealth and the first people they eliminate are the teachers.  Then come the genocides of “undesirables.”  This isn’t liberty or freedom asserting control through righteous law.  This is slavery imposed by the tyranny of the left.  The only way to fight this is to expose them and bring them to justice.

America’s greatest institutions have been corrupted

So, why is President Trump not investigating what we know are the crimes and treacheries of Obama and Hillary?  I want an answer, Mr. President.  You have my complete loyalty in beating back the forces of darkness.  But my faith is wavering in the shadow of Mueller exercising Gestapo tactics against Trump supporters with impunity.  This Robespierre must be brought to justice for his persecutions of Trump supporters.  Gen. Flynn is one of America’s greatest modern generals, yet Democrats have been permitted to ruin him.  Manafort and Stone are both being persecuted in the extreme over lies of them committing crimes of lying to investigators.  There are enough corrupt leftist elements in the FBI and DoJ that America can no longer trust their law keepers.

Democrats have spent a century corrupting the government, the culture, and the world.  WWII was not a conflict between freedom and tyranny, but a spat between the world’s three socialist superpowers.  America has had only glimmers of its glory with the presidencies of Eisenhower and Reagan.  Do Millennials ever question why America’s greatest generals are all Republicans with the exceptions of Lee and Jackson siding with Democrats to keep the states free to impose slavery?  Do they even know what the Civil War was about?  They don’t even comprehend who was on who’s side during WWII.  They watch socialist regimes take power to destroy their own countries then argue that all the states that have imposed socialism on their people “were not really socialists.”  This lie is almost as great as the lie that Satan does not exist or that Islam is peace.

America has become warped and twisted by the left to embrace corruption while slandering and scorning righteousness.  Democrats elect Islamists to begin the transformation of America to Sharia Islam.  The Trump presidency may be the last gasp of the Republic before America goes the way of Rome.  While it is inevitable that good things never last, there is no excuse for Christians to allow Jesus to be slandered as a white supremacist or be portrayed as being a black man oppressed by rich white people.  There is no excuse for not fighting to keep leftist America haters out of education.  There is no justification to allow media to speak lies as if they are true without holding them to account.  America is in decline and Democrats are leading the charge over the cliff.  How will Christians save this great nation from the Dark Side who think they are in the Light?

Democrats remove God from their oaths

All Democrat allegations are founded in lies

[Author’s Note: The raid on Roger Stone has left me unsettled.  How does this happen in America?  How does this happen under a Christian president?  It’s worse than the IRS targeting the TEA Party, but we expected that under Obama.  How is it anyone in our government, let alone someone appointed to investigate a known fraud, has the power to send more armed men to bring in a helpless old man who is cooperating with them than were sent to take out Osama Bin Laden?  The leftist Democrats want to see this happen at the White House!  Talk about a socialist coup being perpetrated right before our eyes!!!  Why hasn’t President Trump put an end to this charade?  Two years of this leftist coup attempt is more than any righteous American should suffer.  The Democrat media corruption has been exposed and the leftwing America haters are out in the open.  Why give them any power when they will only use power to enslave righteous Americans?  Democrats have weaponized our tax and justice departments to persecute Republicans to bankrupt them.  How could Donald Trump overcome the swamp when the rats are in the guise of human beings fighting for Satanism?  President Trump has just gotten a full dose of the determination of how little Democrats care about people in their quest to rule this nation.  They want thirty million illegal aliens to count as citizens on their voter rolls.  As for their infanticide, Democrats have always argued in favor of abortion under the claim it is for the mother’s health and we “don’t have the right” to make laws over a woman’s body.  Yet they have always done so in making their laws against prostitution, prohibition, and drug abuse.  Listening to leftist Democrats tell us what is morally right is like listening to atheists interpret what Jesus would do.]