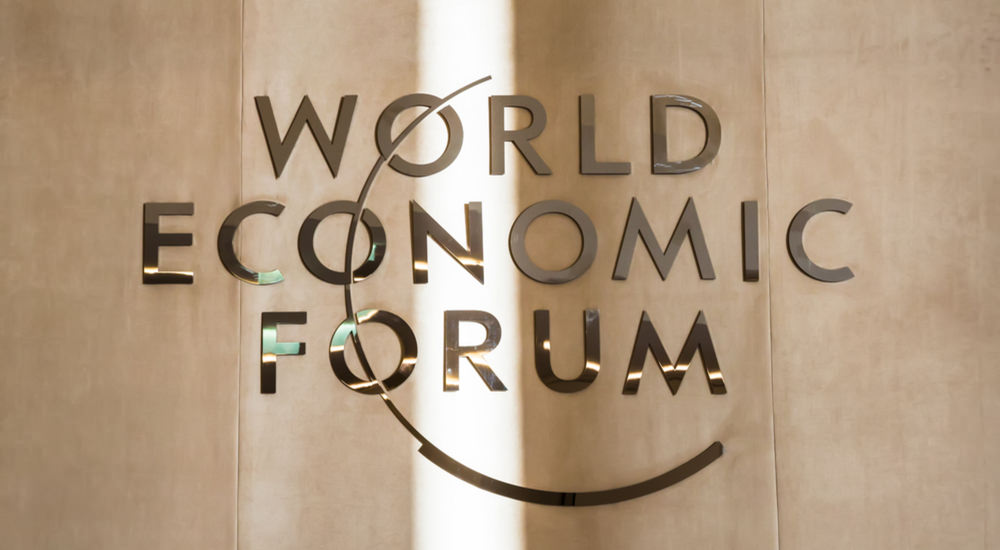 The first lesson of international business is that the monopolies that drive the commercial trading system only hold loyalty to the god of capital. Making money means retaining a profit on trading transactions of business companies. The notion of MAKING MONEY means something very different to the financial empires that speculate on currencies, commodities, bonds and equities. When the two worlds come together to celebrate the common interest of their pirate culture, the Davos port of call, is a necessary winter holiday.

No doubt, the world’s financial outlook is still bleak. The needed measures and will to repudiate the ill gained debt bubble, that has much of the world facing insolvency, is a taboo alternative. The proverbial can that cannot be kicked far enough down the road of postponement keeps the party going for a little while longer. The life style of the super wealthy accustomed to flying into the Alpine village on Gulfstream V’s, hardly relate to the plight of people eating cat food. No surprise, this is the reality that escapes normal reporting.

However, what happens when the EU collapses and nation-states return to their own national currencies? The cardinal rule of the financial buccaneers is to keep the serving of the interest on the debt instruments that they hold as assets, paid by their captive debtors.

When the Fox Business Channel sends a Warren Buffet “groupie” like Liz Claman to cover this year’s World Economic Forum in Davos, you know you will get soft interviews and approving reporting. The same can be said of the coverage by most of the financial media. Watching questions at a press conference usually provided a strong sucking sound coming from the journalists in a desperate hope to gain favor among the titans of financial business.

It is refreshing to read in The Economic Times an account about Britain’s Prime Minister David Cameron. His slamming of the eurozone as uncompetitive and branding a planned transaction tax “madness”, strays from the strategic objectives of the financial elites. The financial speculation leveraged by the City of London brought the UK to the brink of collapse. Nevertheless, as a lone voice that squelches a retooled “Tobin Tax”, Cameron deserves credit. He may just be serving his own domestic political interest, but any opposition to refloating the debt with another round of additional taxes, is a positive. Even if he falls far short with true systemic solutions, the road to global taxation needs derailing.Cameron scornfully dismissed French-led plan:

“Even to be considering this at a time when we are struggling to get our economies growing is quite simply madness,” he declared.

“Of course it’s right that the financial sector should pay their share. In the UK we are doing exactly that through our bank levies and stamp duty on shares. And these are options which other countries can adopt.”

The legally protected financial bandits are dedicated to the extraction of even higher taxes in order to rollover maturing obligations. As the EU economy falters and shatters, who will bail out the bankrupt economies? The answer may not exist. John Quelch, the dean of the Shanghai-based China Europe International Business School offers the following assessment in Forbes,

“Last year at Davos, there was wishful thinking about China. Surely China would stumble on its relentless path to economic superpower status, and give the West some breathing space to reboot and revitalize?

This year at Davos, there is also wishful thinking about China, but of a different kind. How can China save the world economy? Surely the Chinese can consume more? And can’t the Chinese government do even more than it already has to prop up the Euro and invest in more Euro denominated assets?”

When people mature in their economic understanding, the harsh reality hits them. The criminal elites who designed this perverted global monetary system actually benefit with a total collapse of the nation states. A total implosion of world markets will not bring down the crooks that already own most of the choice global assets.

Davos is not about advancing productive international business. It is about plotting the next global crisis that drives the plutocrats to demand control that is even more draconian and punitive. Trade often brings mutual benefits when the marketplace operates with balance and equilibrium. However, when cartels dominate commerce and transnational corporatists force monopolistic restraints upon competing enterprises, the net result dampens alternative markets.

The way to view the business practices of the authoritarian model of the privileged Davos cabal is to see their relationships and overlapping confederations as a filtering system that expels any opposition to their long-term plans for both economic and political domination.

The analogy that describes this difference is seen in the protective environments that the Davos connections operate as compared to the meager existence of the average consumer. The vast multitude is preoccupied with economic survival. This sharp contrast with the self-appointed shapers of the world financial system, know of no such constraint.

Businesses that actually produce a product or useful service never bridge the gap between practical consumable innovations and the monetary manipulators that feed off the dynamic and industrious efforts of legitimate commercial enterprises. The money interests that dominate gatherings like Davos bring little to the advancement of actual commerce. Wealth creation is different from the accumulation or theft of riches.

The insurmountable resolution of the world debt bubble is evident to everyone. Yet the banksters care little for solutions, especially since their efforts are the true cause of the coming disaster. The Chinese controlled model will not rescue the globalist trading system. What the Davos elites have in mind is to convert independent economies into subservient appendages of a top down dependent debtor society.Lowering the standard of living for Western economies is an unpleasant fact. The masters of manipulation desire this outcome. Until society recognizes that the debt created financial system is the root cause of the next planned panic, none of us will be safe from the crony state/capitalist juggernaut.